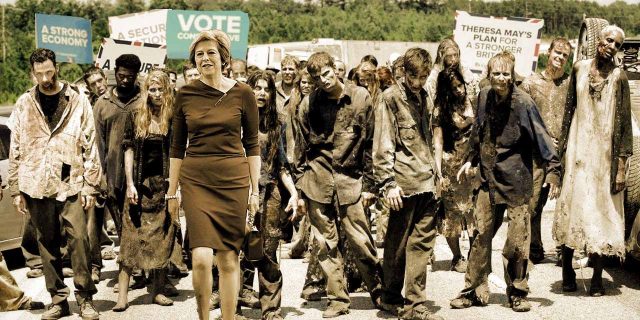 cover pic : Theresa May backed by Cambridge Analytica and Breitbart

I wanted to point out that data harvesting goes on all the time on many different platforms, with or without your consent and I wanted to explain how you don’t even have to do a survey or log in to another platform using your Facebook account. In fact, every time you buy something online some of you’re data can be harvested and used to promote similar or associated products on other websites that you visit through platforms like Google Adwords.

I also wanted to point out how there appears to be a trend forming that whenever you have an organisation or even a public figure who threatens the control of the ruling elite, the spin machine kicks in and goes into full on attack mode. In fact, Facebook is just the latest target. Facebook has been going for 14yrs now and it’s always had issues, so why attack them now? I don’t suppose it has anything to do with the fact that Facebook provides a pretty powerful platform for left wing activism? We all acknowledge, I think, how social media was able to heavily influence the result of the last general election and I think it’s clear that the right will never be able to compete with the left on social media platforms. 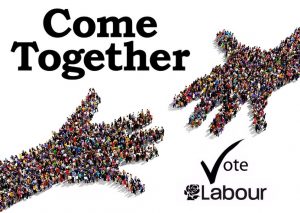 Weeks before the attack on Facebook, which saw Facebook shares drop by 13%, the spin machine had Oxfam in its sights. On 22nd January 2018, Oxfam released a report which revealed that 82% of the worlds wealth was held in the hands of the 1%. The attack on Oxfam was merciless and weeks later, Oxfam had lost 7,000 donors.

A particular favourite target of right wing spin machine, as many will know, is the leader of Her Majesty’s Opposition – Jeremy Corbyn. Jeremy has been subjected to some of the most awful slanderous attacks since he was first elected as Leader of the Labour Party and they are relentless. He’s been called a terrorist sympathiser and a Kremlin stooge and he’s been accused of fostering Antisemitism within the Labour Party and for having IRA links. Lesser people would have crumbled under the weight of a sustained attack like this but somehow he’s weathered it and he’s stronger now than he ever was.

So, what did I stumble across while I started to look into the spin machine? Ok, here goes…. 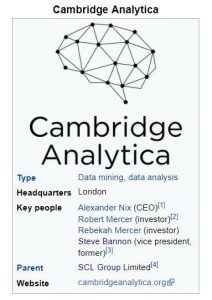 Most of you will be aware that Cambridge Analytica is a Data ‘mining’ and analytics company and that the SCL Group is it’s parent company. You’ve probably also heard how Cambridge Analytica ‘mined’ the personal information of approx 50 Million Facebook users, without their permission, and then used that data to campaign for the UK’s Leave.EU referendum campaign, as well as Donald Trump’s presidential campaign in 2016. You probably also heard the Leader of the Scottish National Party in the House of Commons, Ian Blackford, recently pointing out that… 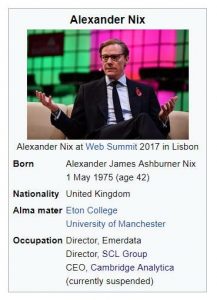 Ex Etonian and currently suspended CEO of Cambridge Analytica, who was caught on a secret Channel 4 News video offering “beautiful Ukrainian girls” to entrap and bribe political opponents is also a Director of Emerdata and the SCL Group, as well as the CEO Cambridge Analytica. 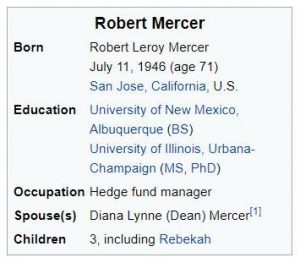 Mercer is a billionaire American investor who recently sold his stake in Breitbart to his daughters. During the Brexit campaign, Mercer donated the services of data analytics firm Cambridge Analytica to Nigel Farage (although the Leave.EU campaign did not inform the UK electoral commission of this donation). Robert also donated a considerable amount to Donald Trump’s 2016 presidential campaign. Mercer is also Director of eight Bermuda companies listed in the Paradise Papers. Mercer has said that he thinks the Civil Rights Act of 1964 was a major mistake. 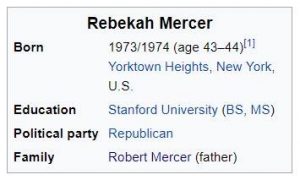 American heiress (Robert Mercer’s daughter), member of and a major donor to the US Republican Party. Rebekah was heavily involved in Donald Trump’s 2016 presidential election and has been referred to as the “First Lady of the Alt-Right”. Mercer introduced Steve Bannon to Trump and was one of Bannon’s main financial contributors. Rebekah is also part owner of Breitbart. 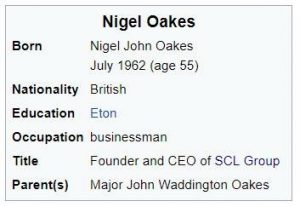 Ex Etonian. In 1992, when describing his work to a trade Journal, Oaks said “We use the same techniques as Aristotle and Hitler … We appeal to people on an emotional level to get them to agree on a functional level.”

Wealthy businessman and investor who, amongst other things, founded Western Wines, introduced Volvic to the UK, was European Brand Manager for UK with Distillers Company and a Non Executive Director of Homeserve Plc

So, while we’re all speculating as to whether or not Russia had a hand in the US Presidential election and the EU referendum (and God knows how many other political campaigns), the Alt-Right have been busy doing exactly that. The American Alt-right have clearly been collaborating with the right wing elements in the UK to influence both the EU referendum and a UK company has been involved in influencing the US elections. So, the question you have to ask friends is “why are the mainstream media not shouting about this?”

Oxfam report on global inequality, published on 22nd January 2018, pointing out that 82% of the worlds wealth is held in the hands of the 1% and marks out significant challenges faced by women in the work place.

Ian Blackford’s question to Theresa May

Is Theresa May comfortable with the links between the Conservatives and Cambridge Analytica?

📽️ There is now evidence of a worrying number of links between the Conservatives and Cambridge Analytica – is the Prime Minister comfortable with this? #PMQs #CambridgeAnalytica