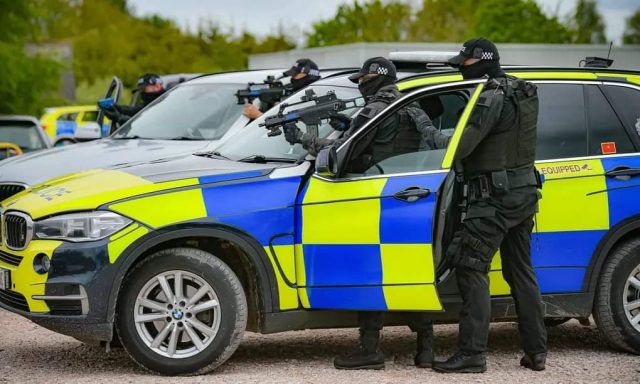 Its difficult to know how we in Cornwall are meant to feel anything but dismay about the upcoming G7 gathering in Carbis Bay, especially when the image we receive of it is dominated by paramilitary figures like those in the photograph. Personally I feel exactly the same about having an automatic weapon pointed at me by the police as I would by anyone else – unenthusiastic to the point of four-letter abuse. These guns aren’t here to protect us, they are here to protect this temporary enclave of the ultra-priveleged FROM us.

Why on earth should we want this here? It is implied that there is some sort of benefit to be gained, but what is it supposed to be? I saw someone on the local news claiming it would “put Cornwall on the map all around the world”. But Cornwall is already on all world maps I’m aware of, just very small. Perhaps G7 hosting bestows the right to cartographic exaggeration in perpetuity. We’ll be like Greenland, appearing on maps to be bigger than Africa, impossible to overlook even if we like being overlooked. Which presumably means the enormous benefit of Russian oligarchs buying up our houses as well as English ones.

Isn’t it noticeable that logistics is not the primary factor motivating the arrangement of such summits? They go to ski resorts not, as you might expect, in the summer when they will be quiet and accommodation easy to acquire, but in the height of the skiing season. And they come to a peak holiday area of Cornwall and plant themselves right on the beach, not in November or February when the extra business might be welcome, but in Flaming June in a year of unprecedented demand because the British can’t go abroad. This seems to indicate that this isn’t really primarily a summit at all. It’s a jolly.

Obviously having the scented souls of the international oligarchy in town is generally taken as an opportunity to address them – usually very briefly, in passing and in handcuffs. To facilitate such communications, on this occasion demonstration sites have been designated – twenty miles away and upwards. The idea was us malcontents and the world’s more genteel subversives would actually kettle ourselves at sufficient distance to ensure not a single chant or lament for a dying planet could possibly inconvenience the soft, sensitive ears of the world’s power elite.

In the words of (probably) Karl Marx, or it might have been Friedrich Engels, sod that for a game of soldiers. Or even paramilitary police.

No, if I’m moved to protest I’ll be wriggling through the undergrowth and making the paramilitaries earn that overtime and their berth in a luxury cruise liner. So I’ve been repriming me placards ready for their new G7 slogans. What to write…? I cast my eyes around the nation, look at our Government, attempt to discern any opposition, think about what is best for the future, about what I can say that will help make things better. And after long thought, and after watching Question Time last night, and the News, and BBC South West’s Spotlight, and bringing my full knowledge of contemporary politics to bear, all I have come up with so far is the following:

“World Elite Go Home (And Please Take Me With You)”

What do you think? All suggestions gratefully received. My paintbrush is poised and waiting.