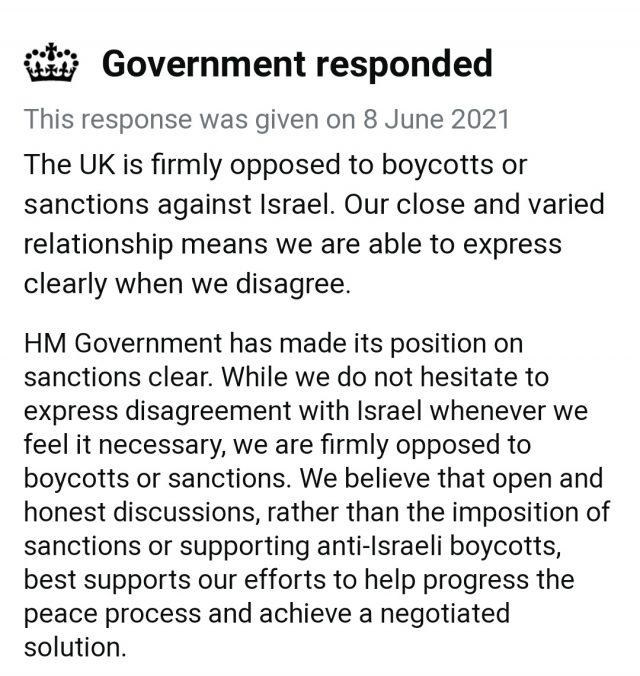 A petition launched less than a month ago asking for sanctions against Israel has been set for debate on the 14th June. The UK government however, has already responded …

“The UK is firmly opposed to boycotts or sanctions against Israel. Our close and varied relationship means we are able to express clearly when we disagree.

HM Government has made its position on sanctions clear. While we do not hesitate to express disagreement with Israel whenever we feel it necessary, we are firmly opposed to boycotts or sanctions. We believe that open and honest discussions, rather than the imposition of sanctions or supporting anti-Israeli boycotts, best supports our efforts to help progress the peace process and achieve a negotiated solution.

HM Government takes its export control responsibilities very seriously and operates one of the most robust arms export control regimes in the world. We consider all export applications thoroughly against a strict risk assessment framework. We continue to monitor the situation in Israel and the Occupied Palestinian Territories and keep all licences under careful and continual review as standard.

The UK welcomed the recent announcement of a ceasefire in Israel and Gaza on 20 May, which is an important step to ending the cycle of violence and loss of civilian life. During the Foreign Secretary’s visit to the region on 26 May he reiterated the UK’s firm commitment to the two-state solution as the best way to permanently end the occupation, deliver Palestinian self-determination and preserve Israel’s security and democratic identity. The UK will continue our intensive diplomatic efforts in the region, focussed on creating the conditions for a sustainable peace.

Israel is an important strategic partner for the UK and we collaborate on issues of defence and security. Our commitment to Israel’s security is unwavering. The UK unequivocally condemns the firing of rockets at Jerusalem and locations within Israel. We strongly condemn these acts of terrorism by Hamas and other terrorist groups, who must permanently end their incitement and rocket fire against Israel. We are also concerned by reports that Hamas is again using civilian infrastructure and populations as cover for its military operations.

We are clear that all countries, including Israel, have a legitimate right to self-defence, and the right to defend their citizens from attack. In doing so, it is vital that all actions are proportionate, in line with International Humanitarian Law, and are calibrated to avoid civilian casualties.

The UK is strongly opposed to the Boycotts, Divestment and Sanctions Movement against Israel, just as we oppose any calls for boycotts which divide people and reduce understanding.

The UK position on evictions, demolitions, and settlements is longstanding and clear. We oppose these activities. We urge the Government of Israel to cease its policies related to settlement expansion immediately, and instead work towards a two state solution. Settlements are illegal under international law, and present an obstacle to peace. We want to see a contiguous West Bank, including East Jerusalem, as part of a viable and sovereign Palestinian state, based on 1967 borders. Our position was reflected in our support for UN Security Council Resolution 2334 and we continue to urge Israel at the highest level to halt settlement expansion immediately.

We advise British businesses to bear in mind the British Government’s view on the illegality of settlements under international law when considering their investments and activities in the region. Ultimately, it will be the decision of an individual or company whether to operate in settlements in the Occupied Palestinian Territories, but the British Government would neither encourage nor offer support to such activity.

As a strong friend of Israel, and one which has stood up for Israel when it faces bias and unreasonable criticism, we are continuing to urge Israel to not take steps such as these, which move us away from our shared goals of peace and security.

The occupation will not end and peace will not be achieved by symbolic measures, but by real movement towards renewed peace negotiations which create a viable Palestinian state, living in peace and security side-by-side with Israel. We will continue to press Israel and the Palestinians strongly on the need to refrain from taking actions, which make peace more difficult. And will continue to encourage further confidence building steps towards meaningful bilateral peace negotiations between the parties.

Do you suppose this is their declared stance on this debate ? Or that the debate will now not take place ? Or is this propaganda to be regurgitated in the pantomime that is UK Government ? 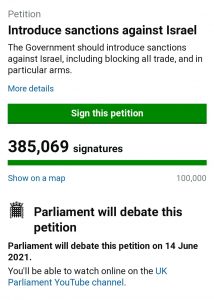