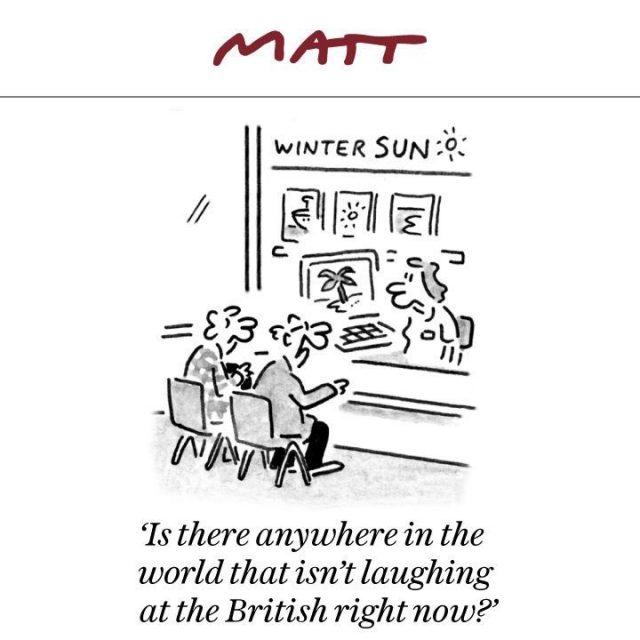 Today, dismal sales figures were released from Primark, Debenhams, Next, Asos etc Some people would say this is proof that the population has less money to spend and that despite high employment figures, work isn’t paying. We say poppycock to that, we had a little look at our favourite high street shops like Harrods and Selfridges and they are doing just dandy with increased sales figures so we don’t know what all the fuss is about.

Greg Clark was looking smug today as new legislation to protect workers came into effect. Fines for employers who deliberately victimise their staff will increase (but good luck getting it because legal aid is almost non-existent). Also, workers must receive details of their rights from the first day of their job commencing. Despite there being nothing about fair pay or a ban on zero hour contracts we all hope that this will make all those Corbyn supporters switch over to the Tory party now because look they are doing stuff for the workers, you wanted stuff and here it is, you’re still stuffed.

Apparently, Trump policies should mean that Britain distances itself from the special relationship but we like Trump. His crash and burn style of leadership without caring about who it affects and whether it means putting foreign children in cages appeals to us greatly. If we keep our Tory overlords in power, long may that special relationship continue and we can carry on imprisoning foreign people in detention centres indefinitely too.

Preparations seem to be taking place for a no deal Brexit with £4 billion pounds pulled out from nowhere to cover the costs. NHS staff are sulking as they have been asking for extra funds for eight years but were told that there wasn’t a magic money tree but every time the Tories dig a hole they can’t get out of a load of money turns up.

Jeremy Corbyn whipped the PM at PMQs today, we were stumped about how to spin it to make him look bad as we couldn’t publish the fact that once again Theresa May had avoided answering any questions. Jeremy Corbyn had made her look like a deflated fart cushion, one that self-inflated to blow childish raspberries at the opposition only to deflate again when Mr. Corbyn stepped up to the podium.

So our Broadcast buddies put their heads together and saw that Corbyn had muttered something under his breath as a particularly infantile performance of the PM and her MPs and decided to subtitle so it made him look like he had said “Stupid woman”. We all know he said stupid people and he didn’t even say it out loud but it was a great distraction that would last a few days whilst we looked for new anti-semitism accusations to throw at him.

Uber is competing to become arseholes of the year and attempted to appeal giving their drivers access to paid holidays and minimum wage but Judges dismissed Uber’s appeal. Uber who justifiably just want to increase their riches and don’t care about the happiness and wellbeing of their drivers are going to try to appeal to the Supreme Court. Good on them, who cares about the underachievers who are just trying to get by, why should they have fair pay and time off…

The plight of homeless people was revealed today after a homeless man who was working died on the steps of Parliament. Gyula Remes died at the age of 43 because he couldn’t afford to rent in London despite having a job as a kitchen assistant at Charing Cross Station. As Lord Sugar would say, he was an underachiever, he should have been an entrepreneur.

Six hundred homeless people died last winter, which was a 24% rise from the year before, reported the Morning Star. Someone needs to buy off that paper, they keep reporting the truth… Someone put them out of business. If people realise they report the facts, people will start buying their paper and we’ll go out of business and I might end up homeless!

I was meant to go on a city break today but some idiots ruined my holiday! I was stuck drinking Champagne at the VIP bar in Gatwick for hours as some prat with a tiny drone brought the airport to a standstill. I gave up in the end and went home, I can’t believe Great Britain was beaten by a tiny toy helicopter… Someone should have brought some barking dogs in to deter them…

A school in Norfolk has set up the first food bank for hungry children, we’ve notified the Conservative Press team and they should be sending someone for a photo opportunity soon.

Yes! The couple that ruined my holiday have been arrested, no one knows more than that yet but I bet they are environmental protesters. Isn’t it enough that in 12 years the human race will start to be wiped out by cataclysmic climate events and once we’re all gone the earth can start to repair itself?

The couple are released with no charges. The hunt for the drone handlers continues… I’m telling you, its Corbyn in a shed in an allotment nearby!