Ms. New Money Rowling tried to show old money that she is on our side by running down Jeremy Corbyn. She spent Christmas Eve Eve, writing sixteen smart arse tweets mocking saint Jeremy Corbyn’s Brexit stance.  Showing that she has joined our big money club in that money has hampered her imagination and made her bitter. The idea of paying more taxes and helping people that may be following in her lowly footsteps is just too much when she is no longer able to write inspirational stories herself.

We love watching the poor that make it rich and then attempt to pull the ladder up behind them, it is so very satisfying.

I joined Mama and Daddy for Christmas today, they have a far superior wine cellar to mine, whilst happily drinking myself into oblivion on wine worth nearly as much as the salary of a lowly paid NHS Nurse we excitedly watched the Queen’s speech.

We were aware that her plea of kindness and respect to others was not directed at us but merely at the oiks who are starting to look at us one-percenter’s with suspicion, especially as yellow vest movements spread worldwide but of course we are hiding that fact, don’t want the people to know all about that. Whilst she spoke of peace on earth and goodwill to all, we know that doesn’t make any money so we’ll carry on fanning the flames of war throughout 2019 just as we have done this year.

It was an inspiring and lovely speech held in a lavish palace room showing our Queens wealth and prosperity, why there was a backlash about a gold piano that could probably house the homeless and feed the hungry if it were sold is beyond us.

Hundreds of thousands of people are visiting food banks because they can’t afford to eat and 1 in 200 people are homeless. But it’s all good, cause the Queen is here to tell us to be nice in front of her golden bloody piano. 🤦‍♂️ https://t.co/yBxnVF4nMc

Christmas over and done with and the day for blood sports seemed like the best day to drop the news that Japan has decided to resume commercial whaling. This was a great story to use to cover up the illegal and inhumane hunts taking place closer to home today.

Then that awful Unity News did it again by publishing an article raising awareness about fox hunting…Those people at Unity News, really do rile us up.

Tory MP Nigel Evans who was falsely accused of rape and sexual assault lost his life savings of £130,000 defending himself in court due to legal aid cuts he voted for. He now sorely regrets voting for the cuts in legal aid and wants them all reversed. We threw this news straight in the bin if the people find out that Tory MP’s are voting for things that affect people so negatively without consideration of the impacts and only change their minds if it ever affects them, people will go mad and may even join those yellow vest protests.

HMV goes into administration putting 2200 jobs at risk, yet another retail catastrophe of 2018 to add to the list, whilst other retailers give profit warnings stating that sales are at the lowest ever recorded.

Jeremy Corbyn (hiss) urged the PM to cut short the parliamentary break in order to hold the Brexit deal vote earlier, proving that he is, in fact, the anti-christ! Who else would call for Christmas holidays to be cut short?

Of course, our sensible PM just got a Downing Street source to accuse Jeremy Corbyn of frustrating Brexit and not having alternative plans, let us just hope that the people do not realise that Jeremy Corbyn is asking for this vote to happen as quickly as possible in order for alternative plans to be put on the table.

A member of the FBPE clan nearly gave themselves away today as she posted on Twitter claiming that a large group of people who are the real currency of the UK and the lifeblood of our country are not capable of having important thoughts and making decisions. Next, they will be claiming that we should stop Brexit because the working class isn’t capable of making important choices and voting in referendums… 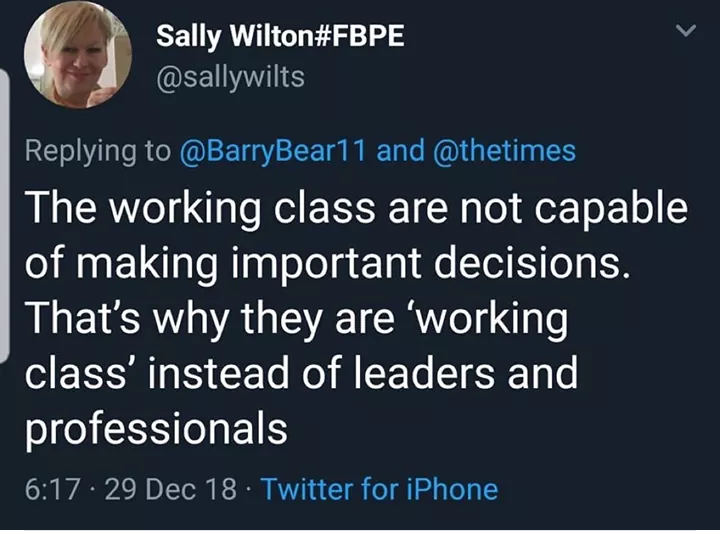 Best keep this one out of the news, those FBPE crews are very good at Corbyn bashing so we quite like them.