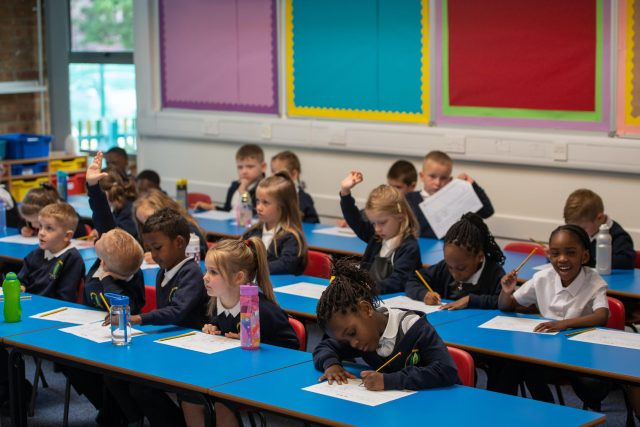 Infection rates in school age children have continued to rise despite the lockdown, with primary and secondary children being the only demographic with an increasing rate of infection. In addition, it was found that secondary and primary schools are the second and third most reported location by people testing positive for Covid-19.

The situation in many schools across the country has been dire for weeks and schools are facing a lack of clarity on how to contain outbreaks, the approach seems to focus entirely on keeping schools open at all costs, whether it is safe to do so or not.

The Department of Education state that 73% of state-funded secondaries and 29% of state-funded primaries in England reported having one or more pupils self-isolating due to potential coronavirus in the school. Figures also released by DFE show that school attendance continues to decrease with 82.9% attendance in all state schools across the country. This equates to 876,000 pupils not attending school due to self-isolation.

A DFE spokesperson said “We are supporting schools to ensure remote education is in place. We recently purchased an additional 96,000 devices which brings the total to over 340,000 laptops and tablets being made available to schools this term to support disadvantaged children.”

However, the NEU state that “Prior to the lockdown, 700,000 children and young people did not have access to a digital device they could complete schoolwork on. Yet despite the Government’s promises to provide laptops to ensure no child would be left behind, less than a third of those eligible received the equipment they needed to learn.”

On the 24th November a secondary school in Hertfordshire was experiencing increased stress to stay open as 23 teachers and 506 students were self-isolating due to continued outbreaks, despite following the advice to keep staff and children safe. One teacher recently lost her elderly father to the virus after taking it home from the school, whilst government policy now seems to be to supress absenteeism by reducing bubbles to smaller numbers. Schools now are being urged to send home only those that sit next to each other instead of whole classes or year groups. This illogical practice will unlikely stem outbreaks and is causing tensions within schools. A National Education Union (NEU), spokesperson said: “members want to work but they want it to be safe to do so.”

A spokesperson for Hertfordshire County Council said: “Hertfordshire’s schools and teachers are doing a fantastic job under difficult circumstances, and we are committed to supporting them. Government guidance is that schools should remain open throughout the pandemic wherever possible, and we’re working closely with schools across Hertfordshire to help them do that safely.

“Our Health Protection Team are working closely with St Michael’s to help them control coronavirus cases at the school, and the infection control specialists are confident that the school has the right measures in place to manage these safely while remaining open for unaffected students.”

St Michaels had outbreaks in years 7,8,10, 12 along with teachers and staff testing positive but despite following the guidelines they were still struggling to contain outbreaks and chose to send the whole of year 11 to self-isolate. This is an example of the losing battle schools are facing during the pandemic.

A source close to the school said: “Teachers are sanitising the hands of every child at the start and end of each lesson and cleaning every desk and chair at the start of each lesson. Teachers and staff are wearing masks in the corridors and communal areas but the fact remains that 32-34 students are packed into classrooms every lesson as well as packed into school buses and this is how the virus is spreading. It is not possible to social distance in the classroom and on the bus.”

A DFE spokesperson said: “The Government made it a national priority to open all nurseries, schools, colleges and universities to all pupils and students because of the clear benefits to children’s and young people’s education and wellbeing.

“The Chief and Deputy Chief Medical Officers have been clear the balance of evidence is firmly in favour of schools remaining open, and have highlighted the damage caused by not being in education to children’s learning, development and mental health.”

What doesn’t seem to be considered is the effect isolation is having on children’s education and the effect social-distancing regimes are impacting their mental health. Not to mention the worry they must have of catching the virus and the impact that may have should it spread to family or school staff.

A spokesperson from the NEU said: ‘We are concerned about pupils that lack access to technology especially due to the dramatic reduction in tech provision from the government. There is a profound disruption to students’ education and a clear lack of acceptance by government that it is having an impact on their learning, they are just hellbent on keeping schools open at all costs.’