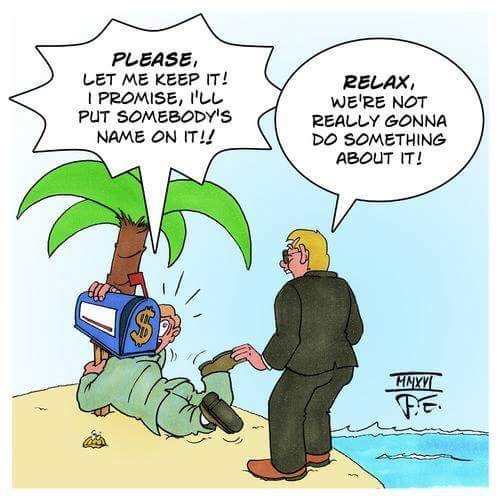 The latest in a series of leaks to expose the extent of off shore investments hit the global media last night. The Paradise Papers are the latest unveiling of the lengths the rich, super rich, and disgustingly filthy rich, will go to in order to avoid their duty – and in most cases tax duty.

Tax evasion is illegal. Tax avoidance is immoral. The definitions to distinguish between the two is actually so, well, indefinable, that all that is required to stay legal side up, is a good accountant or a good lawyer. Preferably both. If you can afford them.

Upon reading about these grubby off shore investment opportunites, one phrase ran through my mind.

For the many. Not the few.

Was there ever a more pertinent moment to stop and consider that by declining Jeremy Corbyn’s offer, the British electorate are allowing the ruling class to ride roughshod over their lives? Off shore investments allow the rich to “avoid” tax.

We live in financially austere times. Inflicted upon us by the Tories. Public service cuts tear at the very fabric of our existence.

Closer examination of this leak, has led some to estimate figures ranging between $7.2 trillion and $32 trillion being invested offshore on a global scale. It’s hard to imagine money on that scale. It’s just as difficult to try to comprehend figures with that many 0’s involved.

Let’s not forget, the Tories led us head-long into austerity to reduce government borrowing. Nevermind that since 2010, government borrowing has increased by upwards of half a trillion pounds and counting: a burden that has been squarely placed on the shoulders of the poor; the disabled; the elderly; the weak; the vulnerable.

Meanwhile the rich are being allowed, indeed encouraged, to enjoy the benefits of society whilst avoiding their rightful contributions.

Why is there a need to have more money than any one person, their spouse, their children can ever spend in a lifetime and yet hide it away whilst others live in abject poverty?

This is not a call to a communist revolution. It is a demand to pay what you owe. To pay your dues.

What we can expect to see now, is just how many of the rich and famous, celebrity and political, from the UK have used off shore tax havens to avoid paying what they should. We can expect to be able to have some level of calculation on what tax is being avoided, and by whom.

Can we expect to see the Government rush to finally address this issue? I doubt it. Because the people do not hold them accountable. This will be a massive lack of public outrage. There IS an apathy of horrific proportions to the level corruption that exists, and results in the “little people” being screwed over again and again and again.

People, huge amounts of people, scrape by from one pay day to the next. Those who are told they are lucky enough to have a job, yet that job barely allows them to survive, let alone live, are taxed to the maximum. To fund public services that are on their knees whilst millions of pounds of missing tax revenue has a casual blind eye turned to it.

When will enough be enough?

People have the ultimate power. The power to end their own exploitation. However that power requires the people to wake up and pay attention.