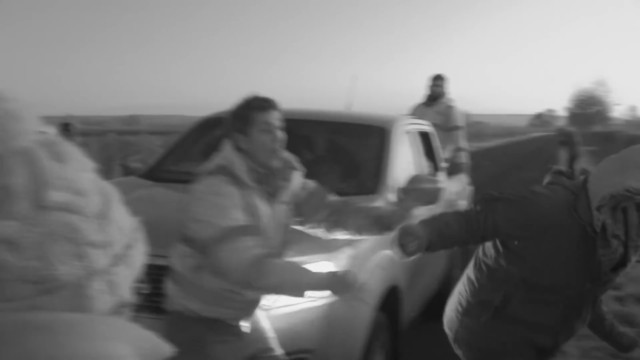 Another day on the frontline at Kirby Misperton for the Protectors in their fight to prevent contamination of drinking water by Third Energy. Protectors were assaulted, detained under spurious use of the mental health act and arrested on a debatable offence of allegedly obstructing the highway.

The first incident was when Protectors who were peacefully protesting and attempting to slow walk a NLSS security pick up subcontracted by Third Energy, were assaulted by security guards from NLSS on a public highway.

This assault was witnessed by two Police Officers who took no action against the offender apart from tell him to get back into his vehicle. Then the vehicle containing the offender was driven off with three security guards in the back of the pickup with no seats and were unrestrained.

This is an offence under the Road Traffic Act 1988 Regulation 40A Using a vehicle in a dangerous condition etc.

A person is guilty of an offence if he uses causes or permits another to use, a motor vehicle or a trailer on a road when –

a. the condition of the motor vehicle or trailer, or of its accessories or equipment or,

b.the purpose for which it is used, or

c. the number of passengers carried by it, or the manner in which they are carried, or

d. the weight, the position or distribution of its load, or the manner in which it is secured, is such that the use of the motor vehicle or trailer involves a danger of injury to any person.

As if that wasn’t enough these two incidents which were witnessed by Police Officers were ignored and the offenders were literally waved on their way.

Later that same morning outside the gates of the proposed fracking site at Kirby Misperton Police Officers detained a male Protector under Section 136 of the Mental Health Act for the heinous offence of singing hymns. This involved the inappropriate use of paramedics and an ambulance to convey the detained man to a place of safety at Scarborough Hospital. He was released the same day “having been pronounced sane”. The waste of NHS resources by the Police mirrors that of their inappropriate use of the Fire Service to assist in the removal of a Protector from a wooden tower a few weeks ago close to the gates of the proposed well site. No doubt elsewhere in North Yorkshire a request for paramedics and ambulance was deferred to assist the Police in their intimidation of peaceful protestors and their continued attempts to reduce the numbers of Protectors by any spurious means possible.

Another Protector was arrested for “obstruction of the highway” when he was in fact on the verge. The heavy handedness had to be seen to be believed, the gentleman was peacefully protesting and offered no threat to the Police or Third Energy’s operations yet he was hauled to the ground by several Police Officers and handcuffed purely because he had walked on the grass (mud) verge.

All of this contrasts with events on Saturday 4th November when over 200 people met at the village of Kirby Misperton in a show of solidarity with the anti-fracking Protectors organised by the Trade Union movement. Trade Union members from Unite, FBU, Unison, along with Labour Party, Lib-Dems, and the Green party and marched from the village to the gates of the well site. There was no violence and only a minimal Police presence. Today normal Police service was resumed with disproportionate numbers of Police Officers compared to Protectors with the Police intent on a show of force to intimidate and disrupt lawful peaceful protest.
The Police are being used as a private army by Third Energy to facilitate vehicle movements in and out of the site with the full support of a Prime Minister who has demonstrated her total lack of understanding of the Fracking process in her response to questions from Dennis Skinner and Tommy Sheppard in successive weeks at Prime Ministers Questions.
Dennis Skinner 18/10/2017

Meanwhile the protests will continue as Third Energy prepare to be the first company to Frack in the UK since Cuadrillas unsuccessful attempt in 2011 which resulted in two earthquakes at Blackpool. They are still awaiting final consent from Greg Clark the Secretary of State for Business, Energy and Industrial Strategy. The fight across the country against Fracking will continue, but in the meantime Kirby Misperton and the proposed well site is the current front line, so today, tomorrow and for the foreseeable future, the peaceful protestors are determined to protect the environment and health of future generations, facing down Theresa Mays shock troops working on behalf of Third Energy to facilitate the embryonic toxic industry and their attempts to ravage the countryside and reduce it to an industrial wasteland of unimaginable proportions on a scale hitherto unknown.
Fracking has no long term future and the politicians instead of supporting it should be seriously examining and promoting renewable energy sources. The technology for Hydro-Power, Wind Power and Solar Power has been around for decades, if the political will was there instead of vested interests in extracting fossil fuels this country could be self sufficient in renewable energy in time to comply with the Paris Climate Agreement. If the dash for gas continues and fossil fuel extraction in the form of Hydraulic Fracturing goes ahead then it is almost certain that the Paris Climate Agreement will fail to achieve it’s objectives and the UK will be a major contributor to global warming.