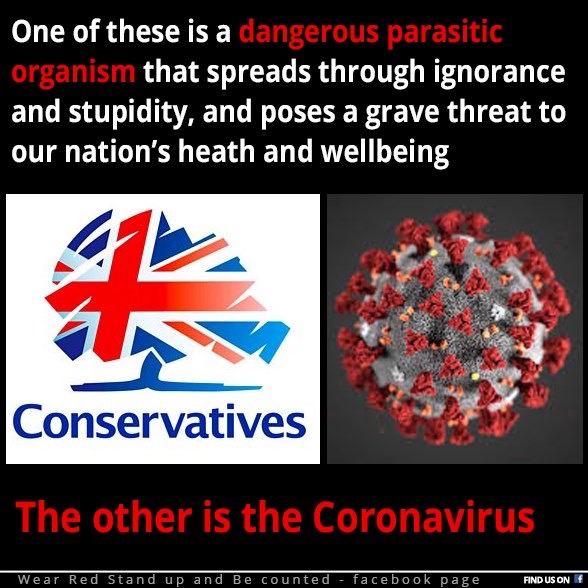 The Covid-19 pandemic which is rapidly spreading throughout the UK was entirely preventable. On January 11th when the first death was reported in Wuhan the warning signs were ignored. The first victim had purchased food from the wet (live animals) market in Wuhan.

At the beginning of the pandemic, cities in China were going into lockdown.

It was at this point when our Government should have taken action to defend the citizens of the UK. As an island nation our borders are easily secured, that was the time to close our airspace, airports and seaports and stop all movement in and out of the country.

The advice emanating from our Government at this time (which was typically arrogant) was that the Coronavirus presented no threat to the UK.

As the virus spread outside of the Chinese borders further warning signs and opportunities were ignored and missed. It was immediately clear that the epidemic was very quickly morphing into a pandemic yet our borders remained open and still are to this day eleven weeks after the first death in Wuhan.

Mass gatherings at sporting events were allowed to continue there was no official Government advice and it was only the various sporting bodies themselves who cancelled the various programmes of Football, Rugby, MotorRacing etc. Yet there was no lead from the Government.

The UK Government seemed to have been either playing catch up throughout this crisis, or employing a deliberate strategy of protecting income streams for the already filthy rich? Your guess is as good as ours.

The government have failed to provide the NHS with the resources required until this week when they were forced to admit that Doctors and Nurses are risking their lives on a daily basis with a shortage of PPE. The number of ventilators available is wholly inadequate and the opportunity to join a joint procurement programme with the EU (which the UK is still part of) was ignored and then compounded by a Government that blatantly LIED, alleging that that they had not received the emails. They were completely aware of the procurement programme as they are members of the EU Health Security Committee which was organising the procurement programme for extra ventilators. It has since been revealed that G-Tech offered ventilators free gratis, made in this country, this offer was ignored and a bargain was struck with Tory donor Dyson to supply Malaysian ventilators sometime in June, perhaps.. 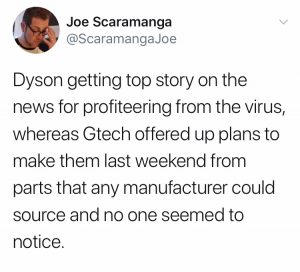 The advice from Downing Street has been both contradictory and chaotic. A Prime Minister who boasted about shaking hands with patients suffering from coronavirus, unfortunately his boasting has rebounded on him as he has now announced he has to self isolate as he is suffering from the initial symptoms of the virus.

When businesses in the hospitality trade were advised to close their doors, the odious Tory donor Tim Martin of Wetherspoons declared that his premises would remain open until he was forced to close the doors of his plastic chain. The equally reprehensible Mike Ashley attempted to keep his shops open and sell his sportswear under the guise that his was an essential business because the advice from our increasingly chaotic Prime Minister was that people could leave their houses for exercise. Ashley was forced to back down and close the doors of his shops, yet his factory in Shirebrook in North Derbyshire is still open. The vulnerable exploited workforce of mainly East Europeans who are living in Houses of multi occupancy (HMO’s) and transported in mini-buses to their workplace are being forced to work in conditions where social distancing is virtually impossible.

HS2 proceeds apace, with evictions taking place today (28/03/20) of the activists who have been starving in the trees for almost a week now since lockdown began, as government forces climb the ancient trees and cut their safety lines in their bid to evict them.

Construction projects are still going ahead and the very nature of the industry obviates any chance of social distancing, yet the workforces are being forced to work or face the threat of unemployment from employers who, because of the lack of government leadership are facing contractual penalties if they can’t finish on time.

The Government have been slow to act when it comes to compensating the employees of business who have had to close down and lay off their staff and only announced financial packages of assistance after pressure from Trade Unions and cross party politicians. They still haven’t offered anything to self employed or zero hour contract workers besides advising them to claim ‘universal credit’ a degrading system which has been overwhelmed by the sheer numbers of people searching for any support to stop them going hungry and/or being evicted from their homes.

The Government should be immediately enforcing the closure of ALL but absolutely essential services for the duration of this pandemic; i.e. NHS, Emergency Services, restricted Council Services waste collection etc, transportation of food and essential goods, food retail outlets and pharmacies. Everything else should be completely shut/locked down.

The government should also have produced universal basic income, so everyone can physically distance and go home safe in the knowledge they can feed their families

The Government are solely responsible for the pandemic which is now spreading throughout the UK, warning signals have been ignored and opportunities to initially prevent and then slow the spread have all been missed. Many thousands in the UK will fall victim to this killer virus and Boris Johnson and his advisors will be entirely culpable. 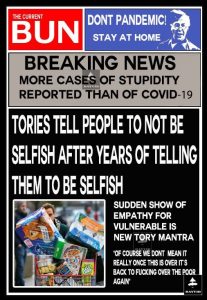