#Chumocracy. I don’t know if it’s a new word or not.
If Johnson’s government gave birth to it, or just prominence. #CONselfservatives ..

The pictures and the story behind it represents that quite well. 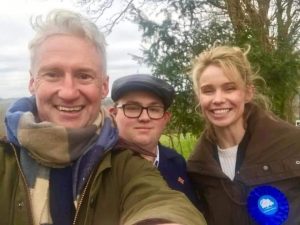 Taken during the last election; on the left is Steve Dechan – ex Tory councillor and newly a millionaire. On the right Siobhan Baillie – ex lawyer and newly Stroud’s MP.

Then an interesting image from the 2019 election campaign. Now I know that Savid Javid has only recently become Health Minister but he, like Siobhan Bailie’s husband is is an ex employee of Deutsche Bank. #Chumocracy

Steve has become famous as one of those people who benefitted from the incredibly generous award of PPE contracts to friends of the Conservative party.

He got about £300m in contracts despite his tiny almost bankrupt company having no track record in PPE supply. And he went through the VIP channel, where the friends were fast tracked and allowed to charge 20% more than typical – without challenge.

That’s how corrupt this government is. Shovelling public money to its friends, under the guise of urgent medical procurement.

Government claims it had to take these extraordinary steps due to the emergency. But was a dad’s army of capitalists and would be capitalists (Steve’s biz record suggests he’s in the latter category) – actually the right way to do this. Were normal procurement channels unavailable? Could the NHS not have managed this better, like they have with the vaccine roll out? Could anyone have handled it worse might be a better question?

Across the board it’s a story of late or non delivery and of supplies not fit for purpose – and hideous value for money.

Steve’s is a classic example – with issues over quality and suitability only 1 in 400 of 120 million face masks delivered have found their way to the frontline, making the average cost of the face masks which were useable – £420 each.

The same thing is available online for less than £1.

Siobhan Baillie MP claims to have had no hand in this exceptional award of vast sums to an inexperienced and virtually bankrupt small business in her new constituency, owned by someone that helped her get elected.
Until recently it was claimed Steve Dechan had not gone through the VIP channel, that turned out not to be true.

I think there’s more to know on this yet. 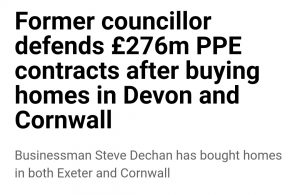