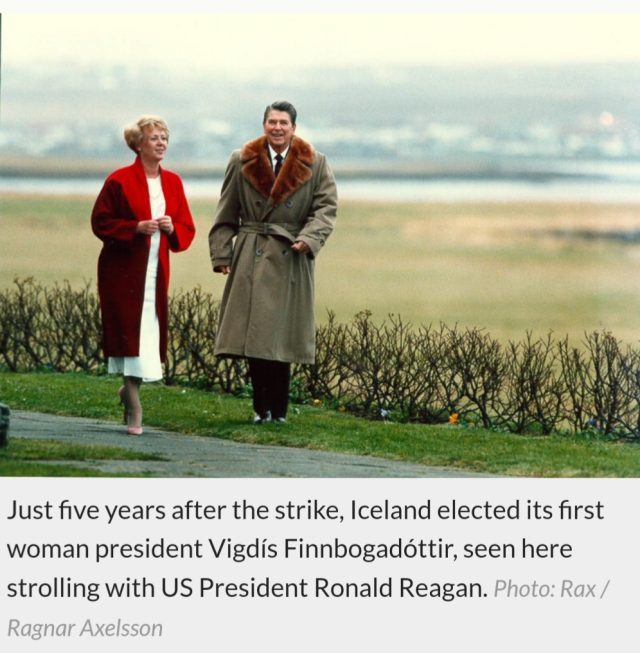 On the 24 October 1975, Icelandic women went on strike for the day to demonstrate the indispensable work women did for the economy and society and to protest wage discrepancy and unfair employment practices.
It was publicized domestically as Women’s Day Off (Kvennafrídagurinn).
Participants, led by women’s organizations, stopped work and did no housework or child-rearing for the whole day. 90% of Iceland’s female population participated in the strike.

Icelandic women who worked outside of the home before 1975 earned less than sixty percent of what men earned. The UN announced that 1975 was going to be International Women’s Year. A representative from a women’s group called the Redstockings put forward the idea of a strike as one of the events in honor of it but decided to call the strike a “day off” as some women could have been fired for going on strike but could not be denied a day off.

Women’s organizations spread the word about the Day Off throughout the country. They got radio, television, and newspapers to run stories about gender-based discrimination and lower wages for women. The event gathered international attention.

During the Day Off, 25,000 out of a population of 220,000 people in Iceland gathered in the centre of Reykjavik, Iceland’s capital, for a rally. There were many speakers, including a housewife, two members of parliament, a representative of the women’s movement, and a female worker. The last speech of the day was by Aðalheiður Bjarnfreðsdóttir, who represented Sókn, the trade union for the lowest-paid women in Iceland.

The Day Off had a lasting impact and became known colloquially as “the long Friday”. Iceland’s parliament passed a law guaranteeing equal pay the following year. The strike also paved the way for the election of Vigdís Finnbogadóttir, the first democratically elected female president in the world in 1980. Every ten years on the anniversary of the Day Off, women stop work early. In 1975, the women strikers left work at 2:05 p.m., and in 2005 they left at 2:08 p.m., reflecting the amount of progress made in 30 years. Increasing the frequency of strikes, in 2010 they left work at 2:25 p.m. and in 2016 at 2:38 p.m.

Black Monday in Poland was modelled on the 1975 Icelandic strike.
The International Women’s Day, a global version inspired by the Icelandic strike, is held every year on the 8th March.
I believe we need to take a day off again.
What are you doing on the 24th October 2022?