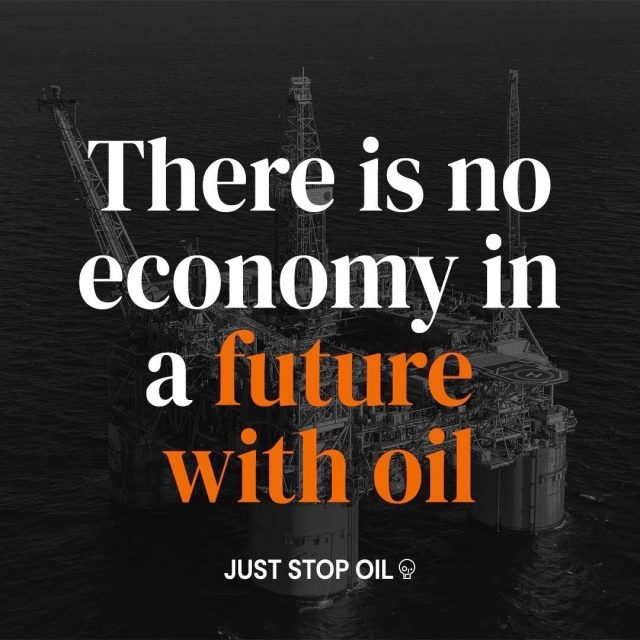 The reality for those of us alive today, is that we face the start of planetary system breakdown. It sounds extreme, alarmist even but irreversible tipping points have been crossed in the Arctic and Antarctic, and one credible future right now is the loss of arable agriculture in the UK and the breakdown of civil society. Think about that for a minute.

If I had been a textile worker in 1860’s Bradford I like to think I would have been part of the movement demanding collective bargaining, breaking the law if necessary to achieve it. If I had been a British woman in the 1900’s I imagine I would have been a Suffragette, disruptive, unpopular, imprisoned. But I find myself in 2022 with the growing consensus that civil collapse is a real possibility, in my lifetime – if it was acceptable to disrupt and break the law in the past, what now is justified, required, to defend our way of life, our communities, our world.

The Chief Executive of the International Energy Agency (IEA) said in 2021 ‘ if governments are serious about climate change, there can be no new investment in fossil fuels from this year’. The IEA, set up almost 50 years ago to manage the continued flow of oil and gas, is saying no more oil. Yet we have airport expansion, coalmine extensions and new oilfields proposed, often supported by individual unions or the wider social movement. What is going on?

Our collective reality is not about whales and polar bears, important though they are, it’s the loss of every pension, every school, our food, law and order gone…  it’s the impact on everyone and everything you love. Every right and freedom that has been struggled and worked for is going to be lost, every cherished place, every culture and every tradition gone. Even the Ministry of Defence recognises that, as we head above 2C, we face increased civil and international conflict over diminishing natural resources. That’s code for war over food and water, and it is only a wartime mobilisation that can now reduce the catastrophe we face.

To support the continuation of the carbon economy and the continued damage of our common home, in the pursuit of growth is now a betrayal of past, present and future generations. It is a betrayal of the struggle of ordinary people who sacrificed so much for our rights and freedoms. Those who do so will be judged, at best as bystanders, or as being complicit in the greatest crime ever perpetrated against the ordinary people of this and every other country.

The only answer as those who fought for Union recognition in the 1870s knew, is civil resistance. Insulate Britain with 170 people, ensured that home retro-fit is no longer the Cinderella of the zero-carbon dance sheet, they may be disliked, but as the cost of living crisis hits it appears that they were right. You know that campaigns of mass nonviolent civil disobedience are not popular, they are either physically, economically or emotionally disruptive.

Think what could have been achieved if the Unions had joined those on the motorways, or joined the school children striking on Fridays. One out, all out. There aren’t endless five minutes to midnight, now we must stand together in the only solidarity that matters anymore, the solidarity with life itself! Standing together for our children, for our futures, together for our world.

The Just Stop Oil Coalition is holding weekly national zoom calls every Sunday 4-6pm, find out what you can do at www.JustStopOil.org