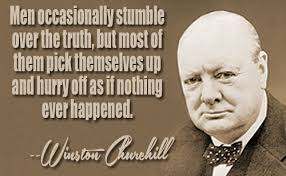 Gary Oldman won an Oscar as best actor for his portrayal of Churchill in the film ‘Darkest Hour’.

It is worth remembering that Churchill who famously stated; “History shall be kind to me because I shall write it” is not the great and wonderful politician that the Media and so-called establishment would wish to portray to the country.

Churchill was a racist and a warmonger with the blood of millions on his hands. The supposedly greatest Prime Minister we allegedly ever had. It should be remembered he was responsible for the deaths of between 3 – 4 million Bengalis during the Bengal famine in 1943.

He wasn’t responsible for the famine, but he was responsible for diverting grain ships from Australia away from India to Europe and declining the offer of aid from Canada and the USA. When told of the famine his response was ‘that they shouldn’t breed like rabbits’.

In December 1944, he was responsible for the massacre of 28 Greek civilians mainly young boys and girls and injuring hundreds more.

Because they were demonstrating in support of communist Partisans who had fought for the allies against the Nazis, in Athens. He ordered British Troops to open fire on them…

Churchill’s logic was that the influence of the Communist Party within the resistance movement (The National Liberation Front and EAM) had grown stronger than he had calculated even though he had backed them throughout the war. This would have skewered his plans to return the Greek king to power and keep Communism at bay. So he treacherously switched allegiances to back the supporters of Hitler against his own erstwhile allies.

This precipitated the outbreak of the Greek civil war which ran from 1946 – 1949.

In February 1945 he ordered the bombing of Dresden in Eastern Germany resulting in the death of up to 135,000 civilians. That is a conservative estimate due to the fact that Dresden was full of refugees fleeing the advancing Red Army.

Dresden had escaped the bombing offensive up until that point of the war as it was not deemed a military target. However, Churchill wanted to send a message to the Russians to show them what Bomber Command could do.

So, instead of the obsequious fawning over the memory of Churchill, we should remember that he was an extremely flawed character capable of inspiring a war-weary public with rousing speeches. However, he was also a man who was not averse to committing atrocities against humanity.

He most definitely was not the greatest Prime Minister this country has ever had. There are many other fine candidates but certainly not the warmongering racist that was Winston Leonard Spencer-Churchill.