The EU election matters and it’s more important than ever to vote Labour.
For the first time ever, the President of the European Commission, Jean-Claude Juncker’s successor, will be elected under the Spitzenkandidat (Lead Candidate) process.

This process means that the group in the European Parliament with the largest bloc will elect the next Commissioner, it is a first past the post system among the parties. For the first time in over 20 years, we could have a socialist leader of Europe but only if the Progressive Alliance of Socialists and Democrats (S&D) which Labour belongs to, get enough seats.

These elections are not PR, the winner will take all and just like First Past the Post we need to make sure people vote for the only party that can defeat the Euro-Conservative, EPP and that is the Labour Party.

Currently, the seats in the EU parliament are:

68 – Alliance of Liberals and Democrats for Europe group (Liberal Democrats)

36 – Europe of Nations and Freedom (UKIP and the National Front)

Find a campaign near you https://events.labour.org.uk/

Create your own campaign https://campaigns.labour.org.uk/ 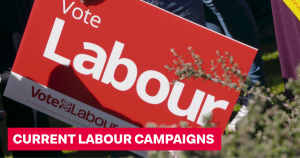