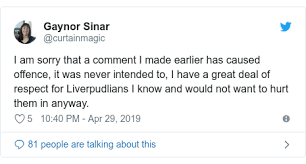 Northwich Councillor for the Tory Party, Gaynor Sinar, came under fire in the run up to local elections regarding a tweet Sinar sent to colleague Mike Jones in a response to an article detailing spending by Cheshire West and Cheshire.

“How to lose a vote: 102, ship in Liverpool Momentum to Northwich. After a few burglaries and drugs incidents traced back to Liverpool over the past few years, we prefer to see local people leafleting and canvassing.” 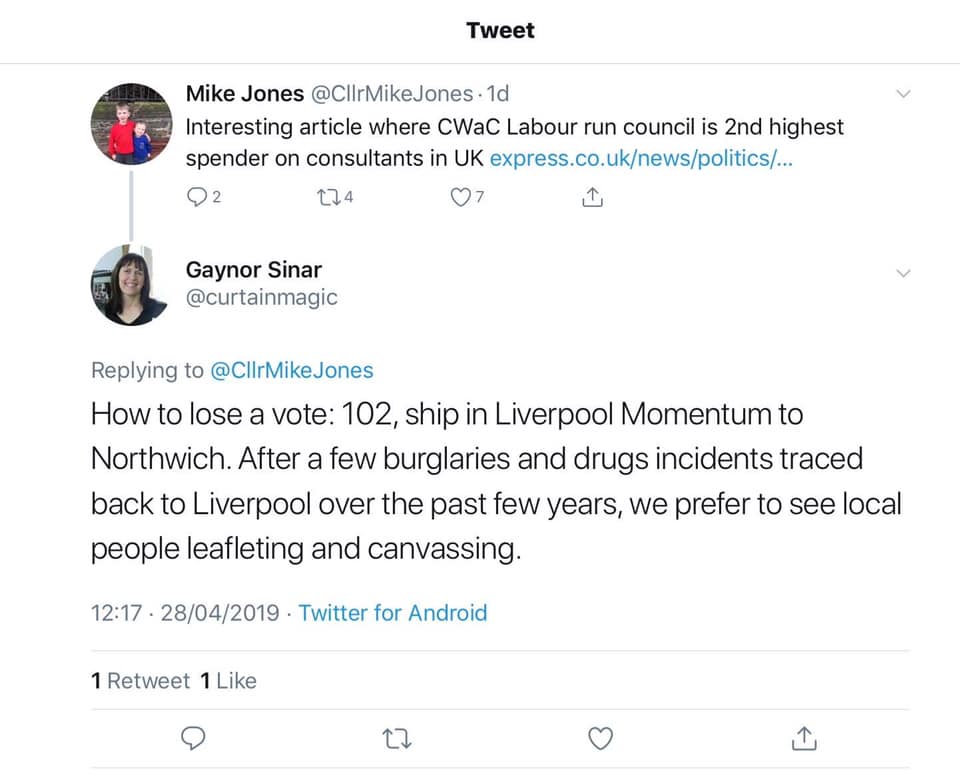 The Conservative Councillor, currently campaigning in a very tight Labour vs Tory battleground, appeared to realise such an inflammatory statement was ill-advised after criticism on Twitter and deleted the tweet. Unfortunately, she was also less than honest about having made the statement at all initially, replying “Only I did not” in response to a tweet sent to Leftwich High School, where Sinar sits as a governor, informing them of her statement. 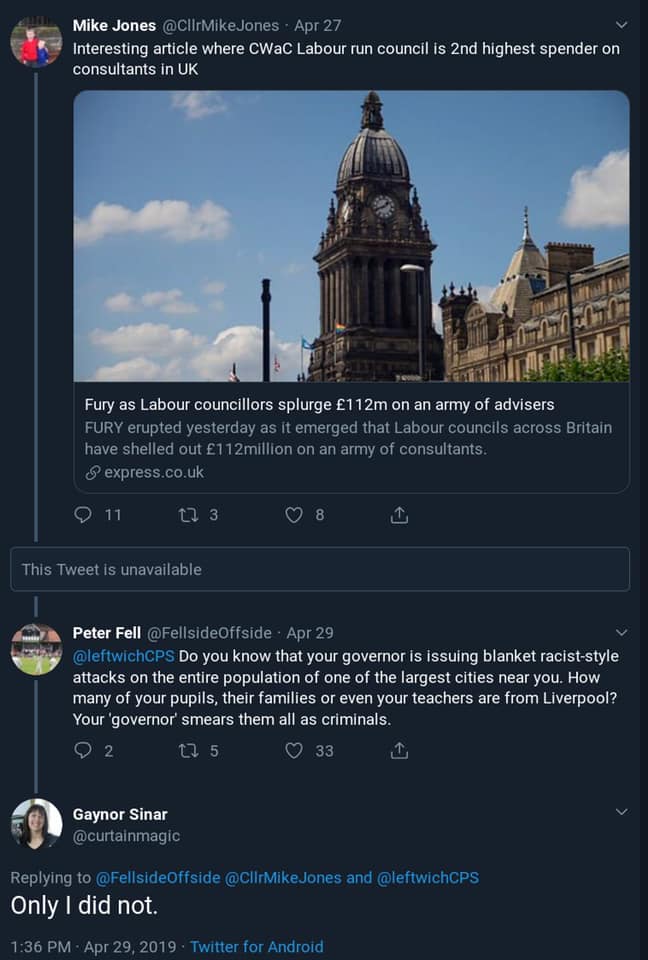 The Tory Councillor and local high school governor followed up the denial made earlier in the day with another tweet, backtracking on the denial:
“I am sorry that a comment I made earlier has caused offense, it was never intended to, I have a great deal of respect for Liverpudlians I know and would not want to hurt them in any way.”

“There was no intention to insult Liverpool or its people whatsoever. I don’t go to Liverpool thinking I’m surrounded by criminals. Liverpool is a great city with great people, and it is the hard work of those people that made the city it is today.

But when you have a stranger knock at the door it can make some people a bit nervous.

This is just how some people play the political game. I was just concerned that people from Winnington might be a bit intimidated if they had people knocking on their door after all the recent burglaries.”

“It does not matter whether they are from Liverpool – it is just the fact that they have got a different accent. It just happens to be that they were from Liverpool. If they were from Birmingham or Manchester or anywhere else it might have been a bit scary for people in Winnington when they have had break-ins. I think it would be better if they had local people canvassing.

“This is a local election about local issues – whether potholes get filled, whether there are charges for parking. I think just it is a good idea to have local people canvassing who know about those issues.”

Oh dear. The Tory Councillor’s apology begins somewhat typically, however soon manages to backpedal straight into another controversial statement, indicating that it is problematic to have a non-local accent in the Northwich area. Unsure as to the “they” Councillor Sinar is referring to in her statements, an investigation into local crime statistics shows as of February this year, there had been 3 burglaries within a mile of the Winnington area mentioned by the Councillor. All that seems to be available in the local press is reports of outbuildings such as sheds and garages being broken into in the Winsford and Northwich area with little to suggest where the perpetrators were from or if indeed any convictions had been obtained.

Also worthy of note, in Councillor Sinar’s original tweet, she references “years” for drugs and burglaries. There were 0 drugs incidents reported in the February statistics for the Winnington area later mentioned in her “clarification”.

The Tory Councillor also appears to suggest that potholes and parking charges are a niche issue for Northwich residents, beyond the comprehension of anyone outside of the area, preferring “local people…who know about those issues”. Further language of note in the “apology” is that she has “a great deal of respect for Liverpudlians I know…” so is the jury still out on ones that she does not know personally? This peculiar wording rings a similar sounding bell to “some of my best friends are (insert demographic here)”.