Back from a lengthy stay abroad and what do I find? – Chris Moncrief having yet another ill-informed pop at Momentum.

He states that “Momentum is regarded as more dangerous and ruthless than the Militant organisation…”, as if that were a given truth, painting a picture of Momentum as a shady soviet-style cabal. The truth is rather more mundane. Momentum is a progressive voice within Labour: the party’s Jiminy Cricket.

Rather than looking to Momentum for plots and intrigues, we should be paying close attention to Chuka Umunna, whom Mr. Moncrief defends with some zeal. Alo.ng with several his right-wing Labour colleagues, Mr. Umunna has been doing all he can to undermine Jeremy Corbyn and set the clock back more than a decade to when Tony “Thatcher’s proudest achievement” Blair and New Labour held sway. 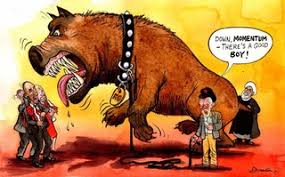 Many of that cohort have since given up politics, a good number of them taking up lucrative posts in the multinationals and privatised services. Some of those who remain are rightly fearful of their positions. The Labour MPs in the pockets of the corporate lobby, and not behind the current party’s commitment to greater equality in this country, will, if mandatory reselection by rank and file party members is introduced, face the prospect of being deselected. This isn’t a sinister “Momentum plot”, it’s true democracy in progress. Labour has around 600,000 party members; they, rather than the party executive, will hold the power to hire and fire.

Survey after survey shows Labour’s centre-left policies are very popular among most of the population. Which explains the succession of smears and fabrications in the mainstream media against Labour and/or Jeremy Corbyn that appear on an almost daily basis. Mr. Umunna’s latest absurd contributions (and Mr. Moncrief’s) only goes to illustrate the point. Far better put out a story about Corbyn being a Czech spy or a warlock grandmaster than discuss Labour’s policies… Because when that happens, people like what they hear.