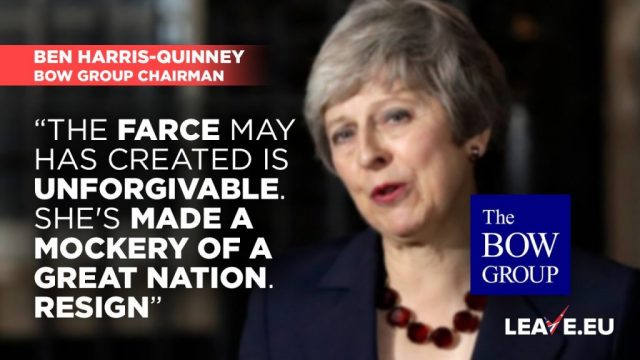 Theresa May has placed herself in an impossible position with no means of escape. Her deal is a non-starter, condemned on all sides of the argument, from Tory Brexiteers to Labour Remainers. A No-Deal Brexit has no friends except the arch Tory Brexiteers who want Brexit whatever’s the catastrophic outcomes for the UK because they are idealogues who have lived and breathed the mantra that EVERYTHING the EU does is bad for so long that they can no longer see anything except through this poisonous miasma. And May refuses to go back to the populace for fear that they may have realised over the past 30 months that they were sold a pup of an idea with lies, fear and not a little tacit racism, and will put her work as PM to the sword and vote to Remain after all.

I watched this morning as Labour MP after Labour MP asked her to tell them what exactly will happen after this deal is destroyed in Parliament, given that no one wants No Deal and she refuses to allow a People’s vote. She could not say and would not say.

The current legislation which means that she cannot even call a General Election without the approval of Parliament means the “Heath” option of calling a GE on the basis of gaining public approval for her deal makes her position untenable. She has staked her position and her career on delivering Brexit and steering it through Parliament, she can’t even steer it past her own Brexit Secretary for a day.

The only answer is for May to offer her resignation not to her party but to the Queen and ask her to offer the Labour Party the opportunity to negotiate a better deal, one that puts people at its heart, that puts jobs and security at its centre. If May truly wants to work in the National interest this is her only route left. Do the right thing Theresa and resign and let Labour do the job which a riven and revolting Tory party cannot and will not do.