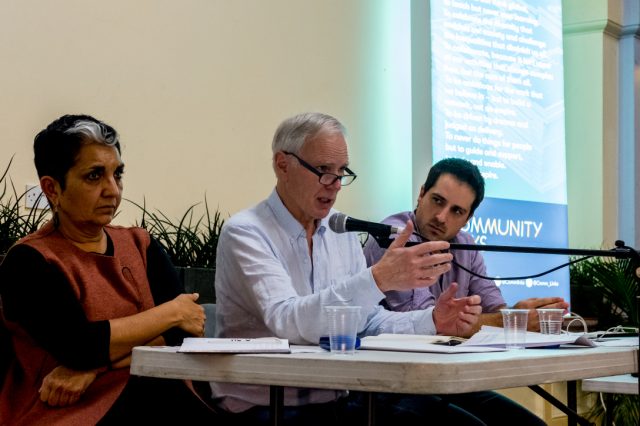 The United Nations Special Rapporteur held a press conference today (16th November 2018), to give his preliminary findings of how the UK Government’s policies are inflicting serious levels of poverty and unnecessary misery in the sixth richest country in the world.

During his visit, the Special Rapporteur traveled to nine cities in England, Northern Ireland, Scotland and Wales, and met with people affected by poverty, civil society, front-line workers, and officials from a range of political parties in local, devolved and UK Governments.

“During my visit I have spoken with people who depend on food banks and charities for their next meal, who are sleeping on friends’ couches because they are homeless and don’t have a safe place for their children to sleep, who have sold sex for money or shelter, children who are growing up in poverty unsure of their future,” Alston said. “I’ve also met young people who feel gangs are the only way out of destitution, and people with disabilities who are being told they need to go back to work or lose benefits, against their doctor’s orders,” Alston said.

He felt that Government Ministers were in denial “The Government has remained in a state of denial, and ministers insisted to me that all is well and running according to plan,” Alston said.

Philip Alston pulled no punches as he described his experiences of what he has seen in his tour of the poorest areas in the United Kingdom.

“In the United Kingdom, 14 million people, a fifth of the population, live in poverty Four million of these are more than 50 percent below the poverty line, and 1.5 million are destitute, unable to afford basics essentials. After years of progress, poverty is rising again, with child poverty predicted to rise 7 percent between 2015 and 2022, homelessness is up 60 percent since 2010, and food banks rapidly multiplying. “In the fifth richest country in the world, this is not just a disgrace, but a social calamity and an economic disaster, all rolled into one,” Alston said.

He expressed how there was a need for a change to the benefits system in this country but how Universal Credit fails to meet the needs of those that need support. “Successive governments have presided over the systematic dismantling of the social safety net in the United Kingdom. The introduction of Universal Credit and significant reductions in the amount of and eligibility for important forms of support have undermined the capacity of benefits to loosen the grip of poverty.”   He went on to say that the benefits system has become as unwelcoming as possible and due to its brutal approach is causing immense hardship.

“The state does not protect you anymore, you are on your own”

He Criticised the waiting period of five weeks or in some cases up to twelve weeks, plunging people into misery and despair. “British compassion for those who are suffering has been replaced by a punitive, mean-spirited, and often callous approach,” Alston said.

He blasted cuts to local authority budgets saying that local governments in England have seen a 49 percent real-terms reduction in Government funding since 2010, with hundreds of libraries closed, community and youth centres shrunk and underfunded, and public spaces and buildings including parks and recreation centres sold off.

“Margaret Thatcher famously said there is no such thing as society.”  Philp Alston said. That we are heading towards an alienated society with the loss of public spaces and community centres resulting in a more unwelcoming society and in the rise of loneliness and isolation for the elderly.

“I was told time and again about important public services being pared down, the loss of institutions that would have previously protected vulnerable people, social care services that are at a breaking point, and local government and devolved administrations stretched far too thin,” Alston said.

Alston condemned the two-child policy and likened it to China’s one-child policy that whilst it wasn’t as extreme it still punished families and most importantly the children of those families.

He was surprised at the British Governments lack of readiness to produce detailed statistics relating to the effects of their policies particularly relating to food insecurity data and the growth in foodbank usage. He advised that child poverty data was left in limbo. He remarked that we should be discovering who is going hungry and why?

He described Capitalism as having winners and losers but that it was an important requirement of a capitalist society to have a safety net to stop the losers falling off the wagon.

“Government policies have inflicted great misery unnecessarily, especially on the working poor, on single mothers struggling against mighty odds, on people with disabilities who are already marginalised, and on millions of children who are locked into a cycle of poverty from which many will have great difficulty escaping,” Alston said.

Robert Wright from the Financial Times asked: “What would you say to a poor person in Chad about what you’re doing looking at the situation in the UK which has less extreme poverty than in other countries?”

Philip Alston replied “You know there’s always someone worse off and I don’t think its a very useful comparison to say my good man you are about to get twenty lashes but in other countries, they give 50”

To ensure that Philip’s findings do not continue to be denied by the Government or are swept under the carpet like previous United Nations reports, please continue to highlight the report and findings. Write to your MPs, raise the concerns, form community groups and fight for our basic rights.

To watch the recording of Philp Alston’s Press Conference, please find it here