Although horrible to watch as a bystander. These riots seem to be exposing some ugly truths that just cant fit under a rug anymore.

Now, just to be clear I’d rather live in a world where George Floyd is still alive. I dont subscribe to sacrificing martyrs. Only in retrospect should we dub them as such. I’d rather have never heard his name or likely met him. Just a random guy in Minneapolis doing his best.

But you cant go back. Only forward. He’s gone and a former police officer isn’t smirking anymore. He’s going to jail for a long time.

Trump is still in the White House but he’s hanging on by a thread. Derailed by a cruel twist of fate after all his tough talk about what should happen to the protesters,

The poor guy was just minutes away from having them breach his security so he could step up and show them just how brave he is in real life only to have his damn bone spurs flare up again.

Shuttled deeper underground like an invalid while real men did his fighting for him.

And the world burns.

Protests are springing up all over the planet. We’re sick of the injustice and would like to help.

There was a huge rally in Trafalgar Square yesterday. I suppose a cynic could challenge its necessity.

Why are America’s problems our problems? In a normal circumstance I’d agree.

To be honest i bristled when a huge rally took place in London to protest the democratic election of trump when the unelected appointment to prime minister of known homophobe Theresa May was met with a shrug from the general population.

He has called black people “piccaninnys with watermelon smiles” and compared Muslim women to letterboxes. You cant defend that. He’s a bigot and a racist. He said it in print, out loud, for money. He’d could’ve written anything for his column but he wrote that. There was a time when that would make you unfit for office but not now.

He won in a landslide. You cant have voted for him AND watch the news right now with dismay. You lost that right in the voting booth.

You are not on the good side. Youre a bad person right now because you didnt think black lives mattered.

Not on Election Day at least. Which makes you and your prime minister a racist. Own it. Today’s your day. Watch the news and know that this is what happens when you accept hate as an opinion. 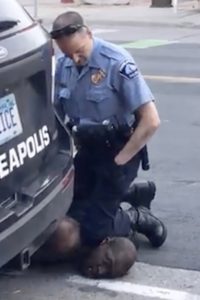 Chancellor, Rishi Sunak plays a blinder placating the low paid and the unemployed.