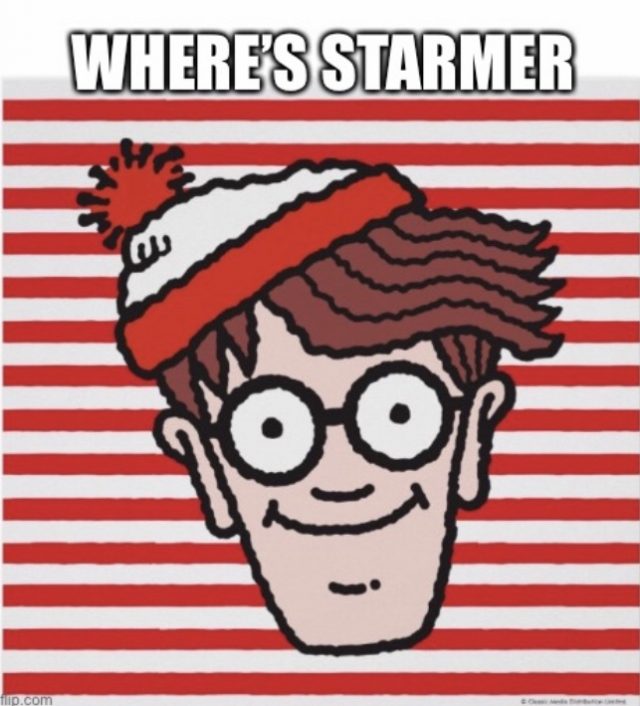 I’ve been roundly told off by a number of people for asking the question ‘Where’s Starmer?’, which I asked in consequence of his apparent lack of any kind of public response to the Cummmings press conference.

Three things to say about that:

1) Kier Starmer is now the Leader of Her Majesty’s Official Opposition. He became so on the understanding that he would accept his constitutional responsibility to question and if necessary criticise government policy and any actions the government or its representatives undertakes in the course of applying that policy.

If he wasn’t there after Cummings’ press-conference to question what Cummings said as the leader of the LibDems managed to be, then he damn well ought to have been.

2) If the Labour Party is to stand any chance of getting the Tories out, it will need a leader who will stand up, loudly and clearly, against the government whenever this government or anybody in it steps out of line.

Starmer is not being paid just to be clever at PMQs. He’s also there to represent an alternative view of the government to the public so that he may persuade the public which still supports Johnson that he is a realistic alternative as Prime Minister.

If the public doesn’t see or hear him, how can we possibly be persuaded of that?

A few tweets and some articles behind a paywall aren’t going to cut it.

3) I am told we must back Starmer because to do otherwise is to be disloyal to the Labour Party and so damage its prospects of winning power.

Apart from making the obvious comment about the degree of loyalty the last leader got from those whom he was elected to lead, there’s another point.

Loyalty has to be earned.

Starmer, like any other politician operating in a democracy has to be held to account by the people who have granted him his responsibilities.

As opposition leader, he no longer answers to himself, he answers to the whole country.

At this crucial, maybe even historic, time, he should be leading the public protest against the government, instead of standing back and watching.

He himself is making it hard for people to think of the Labour Party as an alternative to the Tories for the simple reason that he is failing to present it as one.

Maybe tomorrow or the day after, Starmer will stand up in public and give this government the kind of treatment this government so richly deserves. But until that happens, Labour Party supporters have the right to question him as to what he is actually doing and what his intentions are.

That’s not being disloyal to the Party. That’s wishing that the Party had the kind of strong leadership it ought to have when the government of the day has never been more fragile;