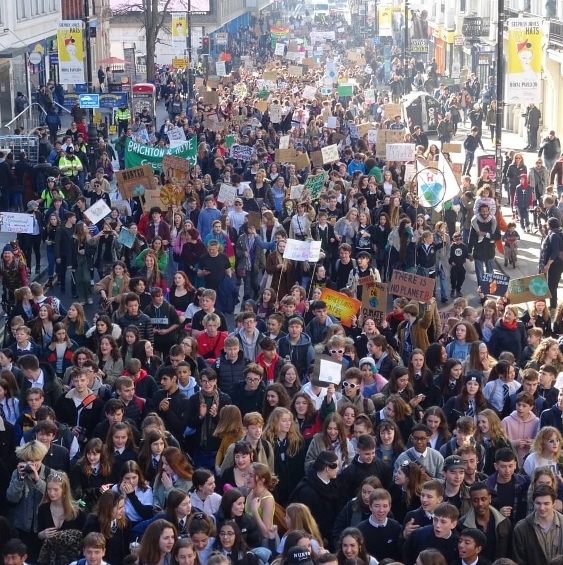 For decades, climate change has been ignored, or sidelined, by our political elites. For decades, the crisis has grown worse, and the consequences more catastrophic. Now, we stand on the edge of collapse, with just a couple of decades left to save human civilisation as we know it.

Warming has already reached 1.3°C, and we’re predicted to reach 2°C by 2035, and 5°C by 2050. What does this mean? Well, the International Panel on Climate Change (IPCC) has warned that 2°C of warming will result in “irreversible climate damage”, more specifically that it may trigger unpredictable ‘feedback loops’ that will prove to be uncontrollable and, thus, result in run-away global warming.

So, what about 5°C? The IPCC, Greenpeace and Extinction Rebellion all largely agree that 5°C of warming would result in the collapse of “organised society” – in other words, the end of human civilisation as we know it. The status quo has no future – ‘business-as-usual’ means the end of organised society.
Time is running out fast; if we are to mitigate the worst effects of ecological collapse then we must act now.

There is one final chance to avert the coming catastrophe, but it’ll take a social effort on a scale not seen in any of our lifetimes. It will take a union of green and red politics – what one of my friends called the “Christmas Alliance”. The Green New Deal must incorporate and combine green politics of ecology – shifting to renewable energy, changes in agriculture and rewilding – with red politics of public ownership – placing the benefits of ‘Green technology’ with society as a whole. Alone, traditional red politics, based on the continuation of fossil fuels, will fall victim to the climate crisis, exposing the world’s poor to devastation on a scale never imagined before. Likewise, green politics alone will not be able to command the popular support necessary to make change, on the required scale, possible. Moreover, green politics alone cannot solve any of the economic or social issues which contribute to environmental disaster. Thus, any Green New Deal brought forward cannot exclude either side. This is the basis of the truly radical Green New Deal which our planet so desperately requires.

What we must do is build an alternative system, one which puts conserving the environment and providing every member of society with comfortable and fulfilling lives at its core. This is the criteria upon which our new economic superstructure must be judged. While for some it is easier to imagine “the end of the world than the end of capitalism”, if we do not end capitalism then the world will indeed end. The current economic system is based around the dominance of massive global corporations – such as Google, Amazon or McDonalds – the goal of the Green New Deal shall be to shift the balance of power towards locally orientated worker-led cooperatives which would give local people more power and make business more accountable to local people. Moreover, this new model of economic composition will make business more grounded in local communities, keeping them more in-tune with their needs.
This model is called ‘localism’. Pioneered in Mondragon, Cleveland and Preston, in this model, local authorities direct spending from “anchor institutions” into the local area and economy. ‘Anchor institutions’ are ‘static’ institutions, meaning that they cannot move, such as schools, hospitals and universities. Localism was adopted in Preston after the collapse of a project to build a large shopping area. After the collapse, the local Labour Council decided to go with another approach and combat out-sourcing rather than continue promoting it. The difference to the local economy has been transformational; while in 2013, anchor institutions invested £38 million in the city, by 2017, this had risen to £111 million. Additionally, the local council has been encouraging anchor institutions to invest in Green businesses and cooperatives. The Preston Cooperative Network was set-up to provide start-up cooperatives with finance and to combat pay-day lenders, along with a not-for-profit energy company, Fairerpower Red Rose, to reduce energy costs for consumers and cooperatives. This model should be adopted on national levels by the Green New Deal; tied to massive increases in regional devolution. Within the UK, this would mean the creation of English regions and granting of substantially more powers to the existing devolved bodies. Moreover, each region would have its own Regional Investment Bank (RIB) whose role would be to encourage investment and development within the allocated region. RIBs would be limited by geographic area, meaning they could not invest in cooperatives outside the region they have been allocated too. In summary, localism offers an opportunity to combat out-sourcing – thus, restricting the power of large corporations – and empower local worker-led cooperatives and local communities.

Localism is only part of how we’re going to build the new economic superstructure, the other part is through Universal Basic Services. While Universal Basic Income (UBI) has become an increasingly popular potential policy, with the Labour Party pledging to trial it in several cities across the UK once they come to power, UBI is not an effective policy for compete economic restructuring. What UBI would do is merely provide people with more disposable income to spend in the same institutions which have caused the climate crisis. Make no mistake, we are in favour of UBI, but not alone. UBI must be implemented as part of a far-wider programme of reform; the mistake of many is assuming UBI can solve our problems by itself. Universal Basic Services (UBS), on the other hand, are a dynamic, 21st-century model of nationalisation. It is the public ownership of the aspects of the economy which are needed to solve the climate crisis and “provide every member of society with comfortable and fulfilling lives”. The most important of these are energy, transport and agriculture. However, other areas also include health and social care, education, utilities and housing.
While the benefits of a complete shift to renewable energy have already been discussed, what a UBS of energy would allow is for these benefits to be shared among the entire population, to benefit everyone. Should our collective efforts be put towards harvesting renewable energy, there is no doubt that we would have a supply of energy far in excess of our demands. The first phase of an energy UBS would be to provide every household with clean energy, this would mean the end of energy poverty. The second phase is to provide energy for all other UBS’s, while in the third phase, energy will be provided to worker-led cooperatives and other social projects – such as scientific research. Any surplus of energy after fulfilling these three phases shall be made available for any other needs required. This would not only mean the end of energy poverty, but also the end of the commodification of energy as well. Simply put, energy would become a public good, utilised in the interests of society as a whole.
Alongside energy, UBS of transport is perhaps the most vital aspect of the Green New Deal. There are an estimated one billion cars in use worldwide and, on average 100,000 flights per day (there were 37.4 million in 2014 alone!). Transport alone accounts for roughly 30% of global greenhouse gas emissions, meaning that this is an area which we simply cannot ignore; a key element of the Green New Deal must be to remove as many cars from our roads and as many planes from our skies as possible. Nationalising transport – just as with other areas – is already an extremely popular policy, renationalising the railways in supported by 76% in the UK. Moreover, localism means that local authorities would be able to manage UBS in transport for their local areas, rather than having large over-centralised monolithic institutions running our transport UBS’s. The Green New Deal will promote a number of modes of mass-transport systems, appropriate for the different areas they will operate in, including railways, monorails, tram and bus systems. Alongside this, there will be a massive expansion of cycling infrastructure, and the pedestrianisation of large city centres.

For the last half-century, our politicians have known about the threat posed by climate ‘change’, but they have done nothing. They will continue to do nothing unless we either force them into radical action or replace them. Charging 5p for plastic bags or banning plastic straws won’t solve the crisis. The system is the root cause; therefore, it is the system we must change. We cannot sit idly-by and wait for our politicians and governments to save us. We must save ourselves. Climate protests have been ongoing for some time now. Protests against inaction, against the use of fossil fuels and against capitalism itself. Protesting against the system is important; but there comes a time when you have to actually campaign for something. That something is the Green New Deal, localism and Universal Basic Services. The Green New Deal offers us the basis for an alternative society, one based on protecting our environment and providing every member of society with comfortable and fulfilling lives.