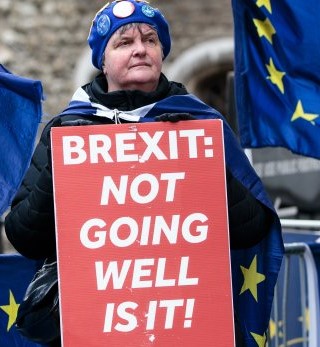 The criminally corrupt Tory Party are entirely responsible for the shambles that is otherwise known as Brexit.

An ex-Prime Minister called a referendum because he didn’t have the balls to stand up to the Racist wing of the Tory Party otherwise known as Ukip or his swivel-eyed backbenchers who are still languishing in the mid 19th century, aka Jacob Grease-Smog and company.

The current unelected PM who was appointed by the men in suits has spent the last 2 3/4 years stubbornly wasting time. She appointed a series of incompetent Brexit Ministers who have all failed miserably to carry out their duties and spent most of their time getting pissed (David Davis) or failing their Geography GCSE Dominic Raab.

The thieving Tories are the only party culpable for this shitstorm no one else. Yet, they attempt to deflect and blame others for their incompetence which is what criminally corrupt Tories always do.

Brexit was born out of institutional Racism which is endemic in the Tory Party and always has been but has been kept just under the surface over the years. However, the referendum result which was based on a campaign of LIES and Racist propaganda let the Genie out of the bottle and now the Tories have been exposed for what they really are; another arm of the KKK as exemplified by the ERG who recently titled themselves as the Grand Wizards.

Tories are led by a woman who has no communication skills and fits all the definitions of insanity by constantly doing the same thing over and over again and expecting a different result.

This mess belongs to the Tories and no one else.

Not fit for purpose, a universal discredit