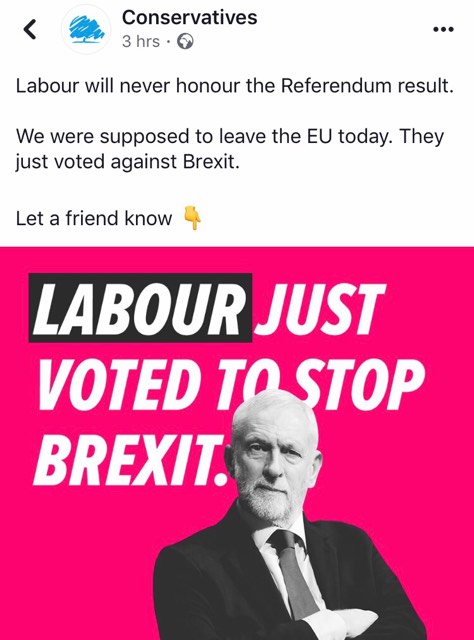 The Conservative party social media team wasted no time today to spread a false narrative after the Prime Minister’s withdrawal bill was defeated for the third time in Parliament.

Spewing forth not only a false statement that “Labour will never honour the referendum” and insinuating that it is Labour’s fault we are not leaving today on the 29th March as we were meant to. “We were meant to leave the EU today and they just voted against Brexit”.

Let’s get this straight, the PM negotiated a bad deal no one wants, it has been defeated twice by the biggest majorities in parliament ever. She didn’t listen and after begging the EU for an extension she then put her awful deal back to the vote again. Her own party members will not vote for this deal but instead of taking responsibility for failing to negotiate a good deal she blames the Labour party…

Not only are the statements false, the photo used does not appear to be the real Jeremy Corbyn but a lookalike. We suspect who it might be but are awaiting confirmation.

We need to act now and ensure that this post is reported as fake news on facebook and twitter. We must show the Torys that we will not allow them to lie their way out of their own messes.