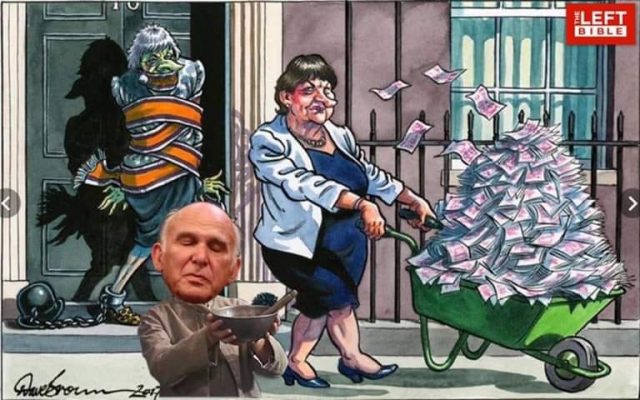 As May bought and blackmailed her way to defeating the vote of no confidence last week, we have to consider the two faces she used as her fall guys. Foster and Cable.

Foster and her band of orange men probably walked away with a huge fee but will it be worth it when the backstop is at her back door ? I’m not sure the people of Northern Ireland will think so, especially as they’re not likely to see a euro of it while Stormont lies dormant.

Cable stood with his begging bowl, initially supporting no confidence, then alternately shaking his bowl at Corbyn and May, begging for a second referendum in return for future support.

Jeremy Corbyn saw straight through May’s posturing, asking for talks, and Caroline Lucas went along to the meeting and confirmed May’s determination not to compromise.

How sad is it that this government that has laid waste to hundreds of thousands of people’s lives in this country, can’t be got rid of ..