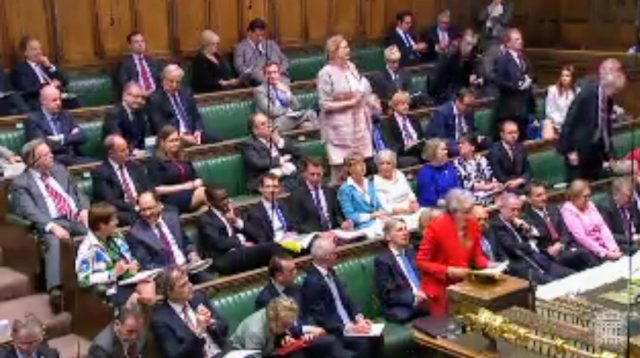 PMQs started today with Theresa May standing up surrounded by a lot of green leather visible on her side of the house. This is unusual for a Prime Minister Questions session and shows that the PM’s colleagues are not willing to support their leader.

Theresa May acknowledged Mental Health Awareness week and advised that she would be traveling to Paris to discuss the use of the internet for terrorism.

Jeremy Corbyn acknowledged Mental health awareness week but also went on to pay tribute to Brian Walden and Doris Day, saying he was tempted to quote her songs. As much noise grew in the chamber Corbyn said “whip crackaway” and apologised to the speaker for starting a parliamentary singalong.

Jeremy Corbyn was enlivened today as he focused on the growing inequality in the UK. He is very strong on this subject and came across passionate and well informed, whilst the responses by the Prime Minister failed to give the import to the subject that is required. This was a silly mistake to make because when the IFS are backing up Corbyn’s views on the effects of governmental policies and Philip Alston’s report on poverty in the UK is being released in the next month, it will really look quite badly on Mrs. May when she fails to take these concerns seriously.

The Leader of the opposition’s first question was in relation to the nine hedge fund tycoons who have donated 2.9 million to the Conservative party and asks is this the government for the many or in the pocket of the few?

The PM answered that income inequality is down since 2010 and went on to claim that Labour wants to bring people down, whilst the Conservatives want to raise them up.

The Leader of the opposition opposed her answer and asked May about Angus Deaton, the Nobel prize-winning economist who after an investigation for the IFS has stated that the UK has the second worst record on inequality in the G7.

May gives a feeble response that wages are rising and that the top 1% are paying more income tax then they were under the last Labour government.

Mr. Corbyn states that real wages are down since 2010 and asks how it is fair that FTSE 100 chief executives are paid 145 times more than the average wage. He referred to his promise to abolish youth rates and asked if the PM agreed with this?

Jeremy Corbyn went on to approach the subject of food banks highlighting that a governmental building had set up a food bank for its low paid workers.

Theresa May repeated one of her favourite lines that the best way to avoid poverty was to work. She went on to use her other favourite soundbites by saying that Mr. Corbyn does not acknowledge the government’s achievement of having employment at record levels (One hour a fortnight is classed as employed). She then turned Corbyn’s own words on him by saying “Who said the last Labour government ensured inequality got worse. who was it? Corbyn himself”.

Mr. Corbyn rightly highlighted that his question was about food banks in a government office, which suggests that in-work poverty is the problem.

Mrs. May went on to say that this government introduced the national living wage which means the low paid are earning more.

Jeremy Corbyn referred to the IFS who reported that child poverty will rise to over five-million by 2022 because of this government’s policies. He went on to say “When the wealth of the richest 1,000 people in Britain has increased by £50bn in one year, but there is not enough money to properly feed our children or pay workers a decent wage then we have failed as a society.”

Theresa May repeats that the top 1% are paying more in income tax than they ever did under Labour and that Labour is proposing a welfare payment for everyone, meaning money for the rich paid for by the poor.