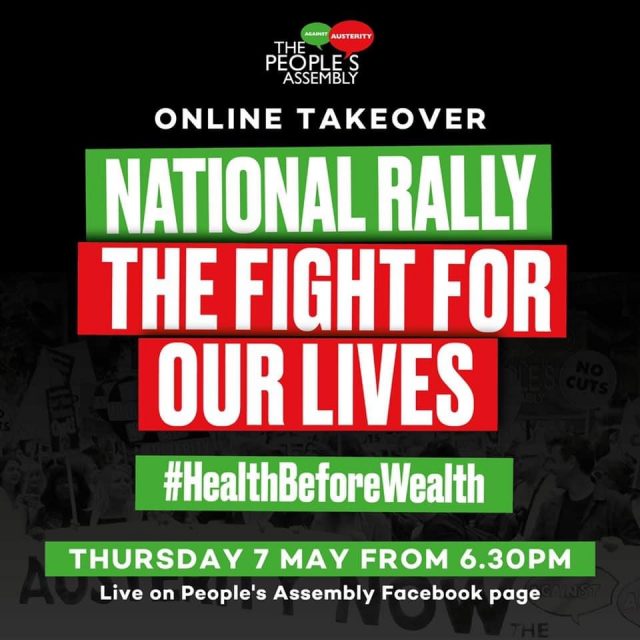 This year because of the pandemic we are not able to come together physically so instead we are standing together virtually.

The people’s assembly are providing their huge platform to all comers to have their say, state their demands and inform us of their plans for the coming year’s actions.

Campaigns such as Dpac, Disabled people against cuts, will be speaking about their suffering under this government and asking us to support them in their struggle to retain what rights they have left and reinstate those lost to them.

Charities such as IoER, the institute of employment rights, will be speaking about the dreadful ‘gig economy’ and what it means to have only a zero hours contract at work.

Unions such as Unite, will be speaking about protecting workers in all manners of ways and how together in a union everyone’s voice is amplified.

Political groups such as the Green Party, will be speaking about their plans to improve our community ‘green values’ and describing how we can all make changes to save our world.

A relative newcomer called Extinction Rebellion will be speaking at this Rally. Born in Stroud in Gloucestershire, it now covers the globe, inspiring young people to stand up against industries and corporations who are destroying our world in the name of profit. Imploring governments and industry to open their eyes to the economic and health wealth opportunities that have arisen out of this crisis which has brought us all nearer to nature and calling for us to NEVER go back to the status quo.

News agencies and independent media will be broadcasting this rally and bringing you links to every group taking part, interviews and vlogs will follow and we will be responsible for keeping this rally at the forefront of the news, at least online, it’s up to every one of you reading this and attending the rally to spread the news and information further..

Be The Change You Want To See

So many pages on Facebook are going to be screening this rally, the list follows. Please share the event   https://facebook.com/events/s/online-takeover-fight-for-our-/234254484316736/?ti=icl   and set your alarm for 6pm Thursday 7th May 2020 to give you time to choose the place you want to watch, invite your friends and family to join you and get the beers or cuppas ready

Charities :
The Institute of Employment Rights

Pages that have agreed to crosspost / stream live :
Jeremy Corbyn
Laura Pidcock
The Communications Union
Unite the union
PCS Union
Stop the War Coalition
The Morning Star
UK Uncut
The Daily Politik
May Day 2020
Pat Bollard
The Left Bible
WEAR RED – Stand up and Be counted
The Socialist Way
The Canary
DPAC
Unite South East Region
Britain Is The People
Attila the Stockbroker
Vote Love Not Hate
Cabinet of Millionaires
Vote of No Confidence in the UK Conservatives 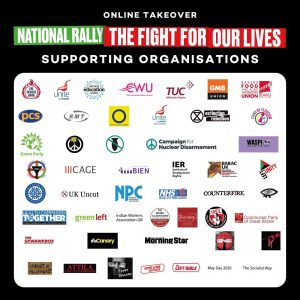