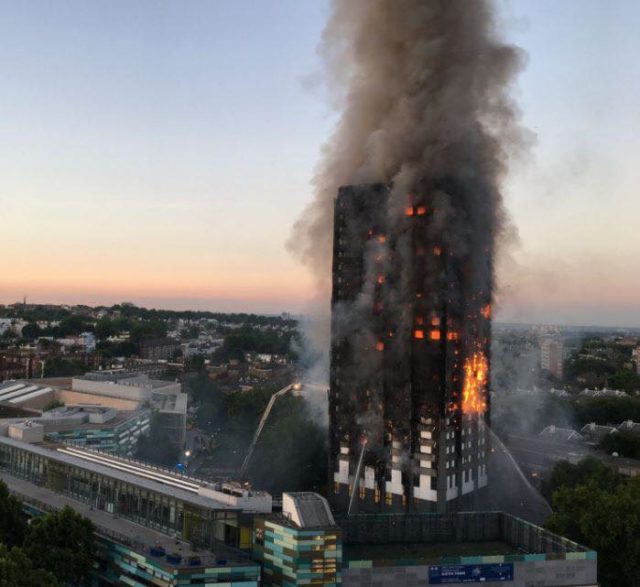 Opening of the Grenfell Tower Inquiry.

Sir Martin Moore-Bick officially opened the Grenfell Tower inquiry at the Great Connaught Rooms in Convent Garden on the 14th September 2017, exactly 3 months to the day since the gutting fire destroyed the tower block in North Kensington.

He began by requesting everyone stand for a minutes silence in respect of those that lost their lives in the terrible fire. Then went on to talk about his sadness of such events and to praise the efforts of the community of Grenfell and the spirit of the survivors before he set out what the inquiry would hope to achieve and how in summary his goal was to find out how such a tragedy could happen in 21st century London.

There was a feeling of unease from the off as the survivors of Grenfell filled a room literally dripping with chandeliers, whilst the chairman stood in front of an impressive ornate gold leaf wall adornment.

Before Sir Moore-Beck even uttered a word, I couldn’t help but think what on earth were they thinking launching this inquiry in such a grand place.
What a contrast this ornate gilded building must be to those survivors who lived in a tower block and now reside in temporary accommodation and in Sir Moore-Bick’s own words ‘are still dependent on the charity of others for their daily needs’.
This luxurious location would do little to diminish the feeling of division between ‘them and us’ .

This can’t have eased the suspicion that the survivors and supporters of Grenfell have for Theresa May’s appointed lead for the public inquiry. A man that has only ever known what it is like to live a privileged life. Indeed, there have already been calls for his resignation and I feel the proceedings will only intensify that call.
He was respectful, solemn and honest about what the inquiry could and could not do.
However, in a court case in November 2014, Sir Moore-Bick gave a judgment to a woman and her children regarding the treatment of her by Westminster City Council after she was evicted from a privately rented property , he upheld that it was not necessary for the council to explain in detail why it had not been able to re-house the family either within its area or closer to the borough.
The decision was reversed in April 2015 by the Supreme Court.

The Westminster council judgment is just one of the reasons the people of Grenfell perhaps don’t hold much hope that he will be a fair and impartial inquirer and what may cause further strife to the survivors was his ruling that he could not allow an ex-Grenfell resident or anyone from the community to be a member of the inquiry team.

“I know that many of the survivors would like me to appoint someone from among their number, or perhaps another local resident, as one of my assessors. Many of them can, of course, provide valuable evidence and I shall ensure that all their evidence is heard and carefully considered, but to appoint as an assessor someone who had had direct involvement in the fire would risk undermining my impartiality in the eyes of others who are deeply involved in the inquiry”

The words ‘would risk undermining my impartiality in the eyes of others who are deeply involved in the inquiry’ are almost an admission that he is under direction from the government and that his hands are tied in this matter .

He did manage to give a little hope to the Grenfell community however , as he encouraged people to come forward to give evidence and interviews so their voices can be heard.

The usual part of his opening speech , that the inquiry was set up only to discover the truth not to punish or compensate , did frustrate those that are desperately seeking justice .

He outlined that the inquiry would be separated into two phases . Phase one would investigate how it started, where it started and the events that took place during the fire including the actions of the emergency services.
Phase two would take much longer as it involved analysing many documents but would investigate the design of the building, modifications and whether regulations had been adhered to including whether the regulations were adequate.

The Chairman of the inquiry also stated the names and posts of the members of his team for the inquiry. These follow below.

Counsel to the Inquiry: Team members whom provide legal advice to the chairman and advise of evidential matters during the inquiry. They will also be responsible for presenting evidence and questioning witnesses.

Richard Millett QC: A judge specialising in commercial disputes and was appointed a member of the Queen’s counsel in 2003, he also sits as a Deputy High Court Judge.

Bernard Richmond QC: A lawyer specialising in Criminal defense with substantial experience of cases involving vulnerable people, he also sits as an assistant coroner. According to his Twitter profile, ‘Injustice and bullies make him mad’. (From his recent twitter posts it can also be seen that he isn’t a fan of Jacob Rees-Mogg.)

Solicitor to the Inquiry
Caroline Featherstone: Retrained as a solicitor in 1998 after a 12-year career as a NHS Nurse. She has worked in a private practice and then moved on to work in the Government Legal Department in 2006.

Secretary to the Inquiry:
Mark Fisher: Previously the director for Civil Society and Innovation in the cabinet office, has worked in the public service for 34 years, mainly in the Department for Work and Pensions.

Sir Martin Moore-Bick announced that he hopes to have the first report presented by Easter 2018 although admitted that would be a challenging goal.

Later in the first evening of the inquest hundreds of people from the Grenfell community took to the streets in Ladbroke Grove in a silent walk , carrying their hope for justice and placards.
They plan to carry out this walk every month on the anniversary of the Grenfell tragedy until justice is served.

Their noble plight was not featured on any mainstream media news outlets , indeed it seems to this observer that the only way anyone can obtain coverage by the media is if they flip cars or riot , even then only so they can be cast as villains to destroy their credibility.

I applaud them for their ability to silently protest and stay peaceful and I hope they know that what they are trying to achieve does not go unnoticed .

They have the full support of Unity News and many more new media groups across the country.