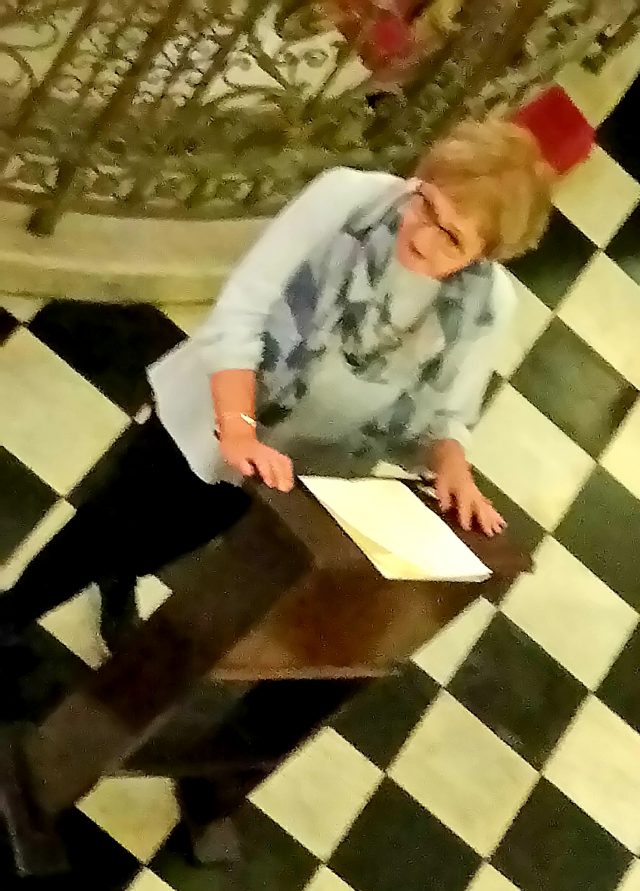 Stepping inside Brighton’s beautiful grade II listed synagogue built in 1875, it was hard not to stop and admire the exquisite stain glass windows, the beautifully crafted mosaics and the majesty of the building itself but one thing it did lack was friendly faces. Being refused empty seats and being treated with suspicion seemed to be the norm at this Jewish Labour Movement (JLM) rally. 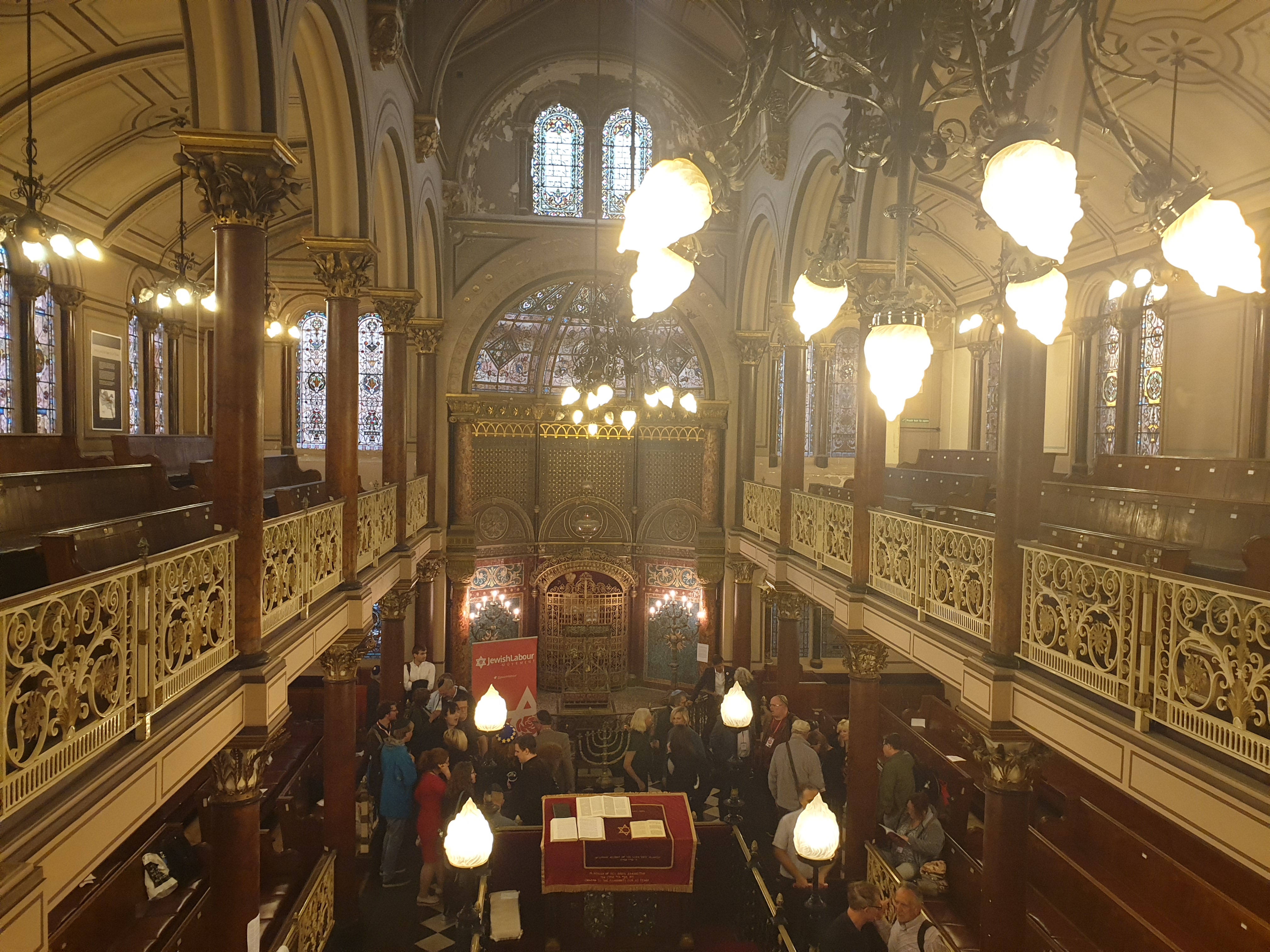 There were thirteen speakers at this event which included high profile names that have become synonymous with the JLM and Labour’s problems with antisemitism, Unsurprisingly the main subject of this meeting but there were some surprising speakers.

The JLM has aligned itself with what some call the “moderate left”. These include Progress a well-funded organisation set up in the era of Tony Blair and Labour First, a slightly older organisation whose aim is to keep the Labour movement safe from the influence of the “hard left”. Both groups had speakers at this event.

Understandably these centrist factions of the party are unhappy with the swing to the left that Jeremy Corbyn initiated when he won his leadership bid by a landslide in 2015 and again in 2016 which saw the membership increase to over half a million. Since then the moderates with the help of the mainstream media have been doing all they can to remove Jeremy Corbyn from the leadership position. As Margaret Hodge MP said at this meeting “I’m not ready to give up until Jeremy Corbyn ceases to be leader of the Labour party”. 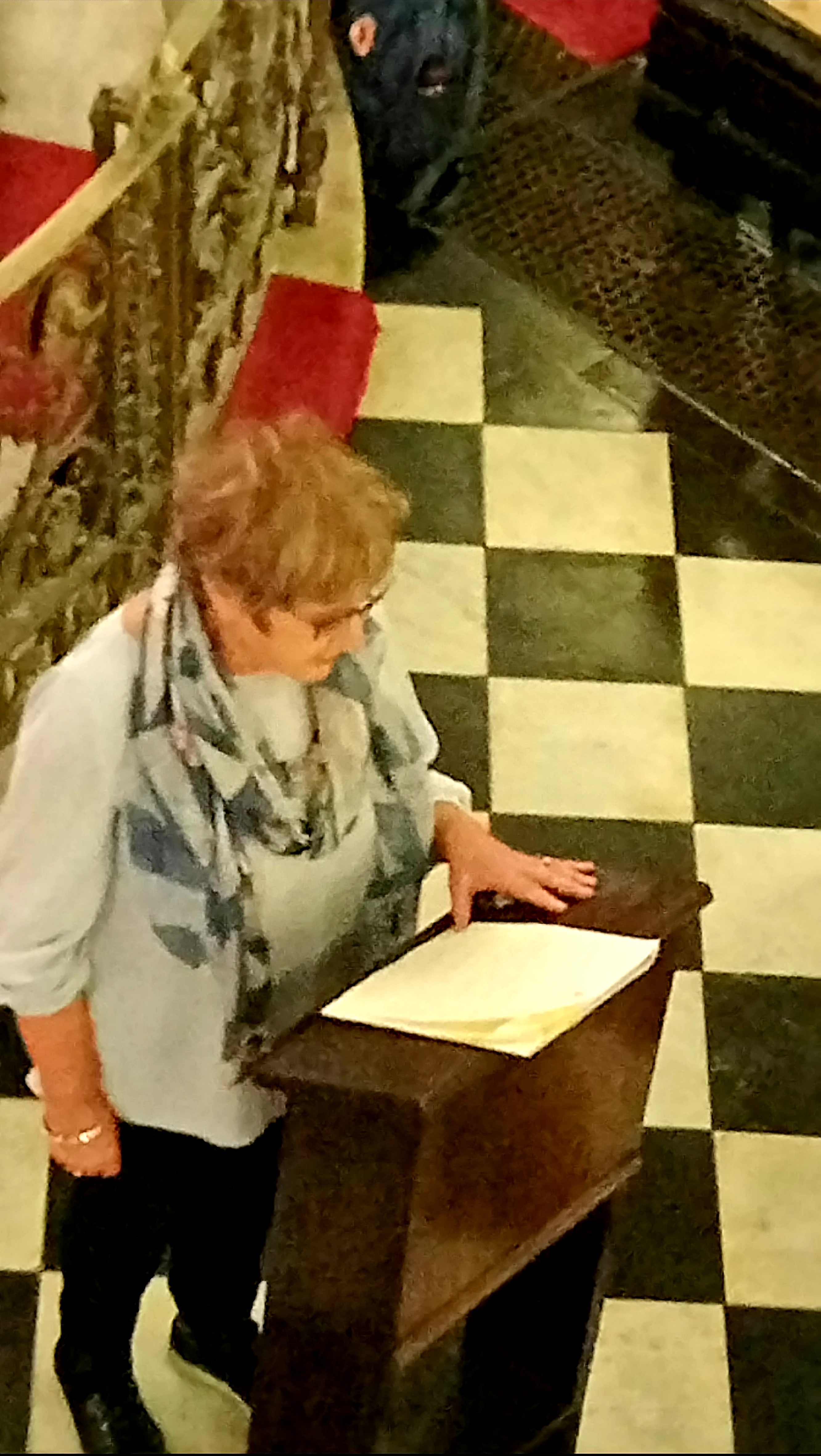 It is unfair to believe that antisemitism is only a stick to beat the leader of the opposition with. We have seen the devastating horrors of antisemitism and the memories are still fresh in the minds, but it isn’t something that remains just in the history books. Antisemitism still rears its ugly head today, the same way that all racism and prejudice does. Listening to Adur District Councillor, Lee Cowen reminiscing about the horrific stories he was told about the holocaust by his family. Immediately your heart breaks for people that had to go through this and an understanding of the fear these people felt and must still feel, every time antisemitism rears its ugly head in the present day. Then he follows that story by stating, “I am a Zionist Jew”.

A Zionist Jew is the “movement of the Jewish people that espouses the re-establishment of and support for a Jewish state in the territory defined as the historic Land of Israel (roughly corresponding to Canaan, the Holy Land, or the region of Palestine).”

For people that have faced so much persecution and still fear persecution. A people that have fresh memories of what it is like to be walled up, their property taken from them and being killed indiscriminately one would think that they would have more empathy than anyone else and would do all they can to ensure no one suffers the way they had, though many Jewish people are this way but to some criticising the actions of the state of Israel equals antisemitism and this is where Labour’s antisemitism crisis begins and ends.

A rabbi, the first speaker said that an important part of the Jewish religion is love “Whether it is love of god, whether it’s love of our neighbour, you should love your neighbour your fellow as yourself or whether it is love of the stranger, a very important part of our religion. You shall love the soul of the stranger, the soul of the foreigner because you were strangers, you were foreigners in the land of Egypt and you know what it’s like. This is a very important part of our religion it is a religion of love.” He followed by saying, “There are 159 Christian countries in the world, there are 56 Muslim countries in the world and there is one Jewish country in the world. It is our country and we have a right to live there in peace and security.” 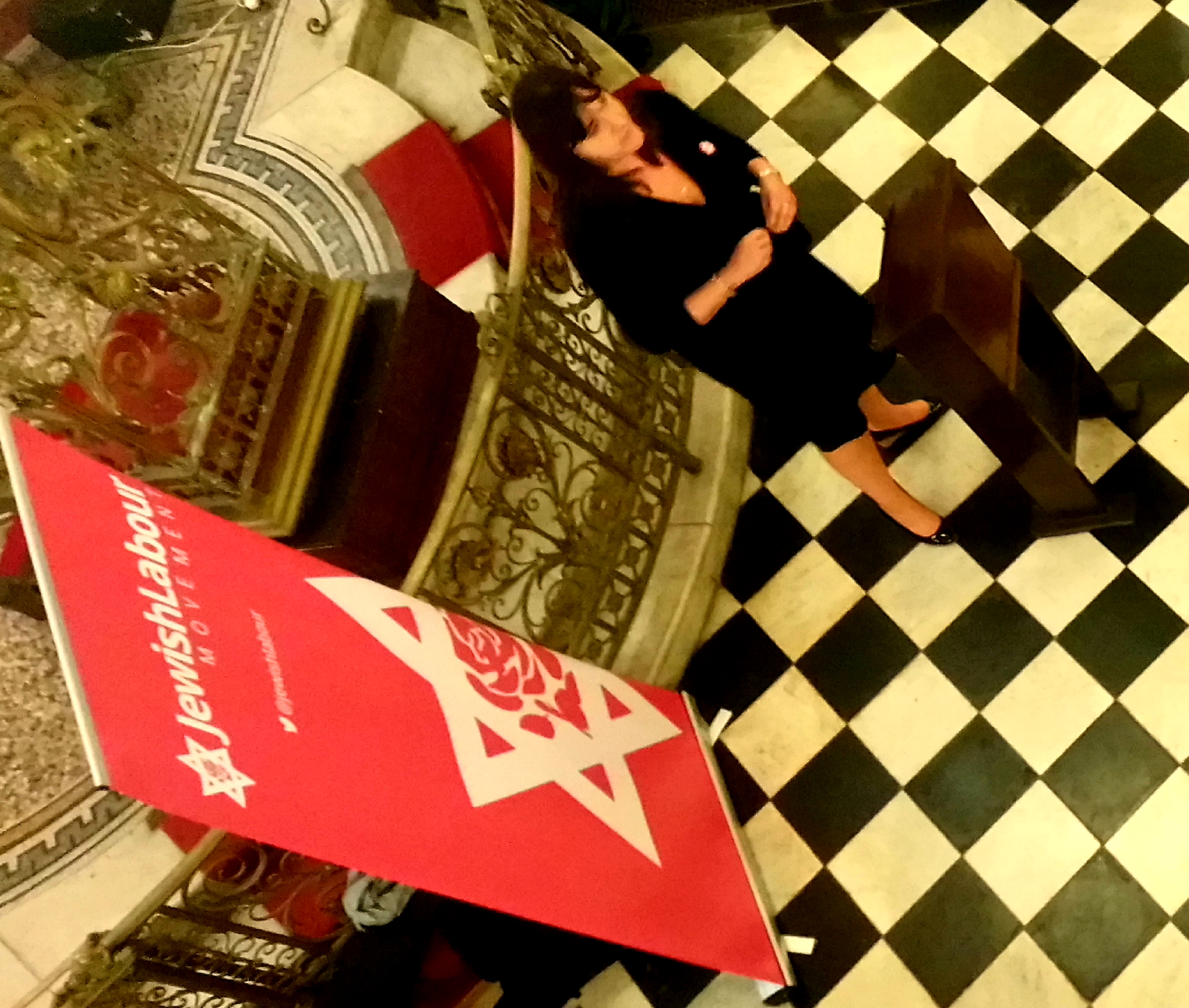 The meeting continued along this theme of ‘them and us’ throughout with Alex Sobel MP claiming superiority over socialism. “Their socialism is not my socialism; their socialism is the socialism of fools.” He added “We need to move back to where we were a few years ago”.

MEP, Seb Dance highlighted the cartoon mural outside the conference centre, depicting Netanyahu gunning down Jeremy Corbyn, this he said was antisemitic.

Louise Ellman MP took over from Seb and explained why the JLM had gathered there today. “We’re here to campaign against the aberration and the horridness in our Labour party, Labours antisemitism and we must keep combatting that and while all the talk is about the impending election and the importance of winning a general election, we must not allow that to stop the argument about antisemitism in our Labour party.  It is also important for JLM to do that very detailed maybe not very glamourous but very, very important work in making that very, very detailed submission to the equalities and human rights commission. A detailed submission, detailing many of the cases of Labours antisemitism where the Labour party has failed to deal with but even worse than that has tried to interfere with the process of those that would try to deal with them.”

Margaret Hodge also falsely accused the leader’s office in interfering with complaints of antisemitism in her speech. A claim that was also echoed in the BBC Panorama documentary, which was embarrassingly found false especially when they used evidence which had been manipulated to present a certain point of view. The problem is that with so many repeating this lie and with the state and mainstream media on board the lie becomes the truth. 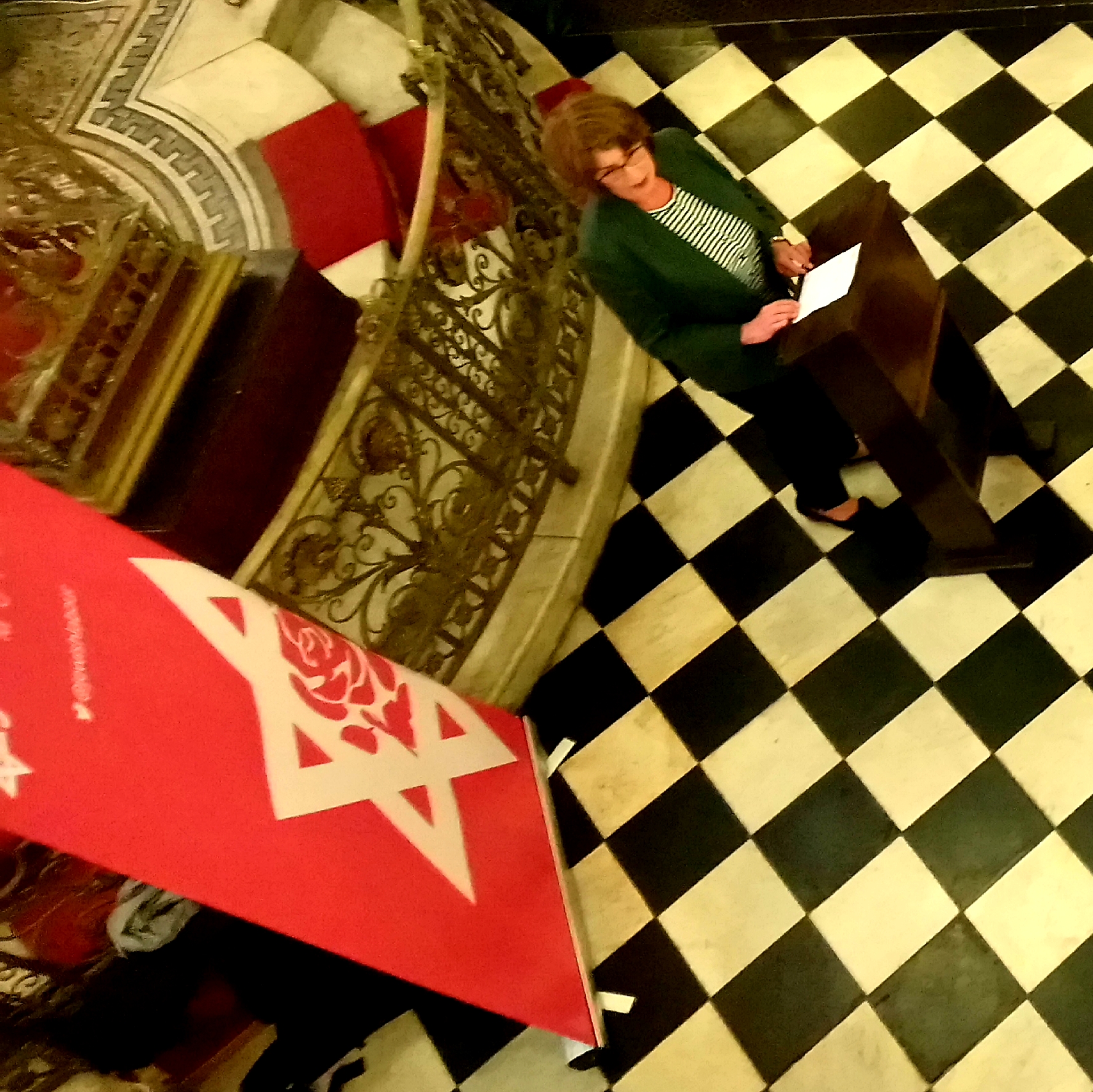 This damaging sermon continued with Rosie Duffield MP asking “Why aren’t these people drummed out of the party instantly? I don’t understand all this talk about processes and things like that, I don’t care.  If I see an email or a tweet and I get emails in my CLP, only one or two, of butchered and maimed bodies of toddlers in Palestine because I dare to speak out against antisemitism because of course those two things are absolutely linked. I’m also the Israel MP apparently along with all my colleagues here.”  She went on to say, “why when we see someone doing a mural like that or one tweet denying the holocaust, why does it take a year, three years, five months of investigation or whatever. Why are they not suspended there and then?”

Many members have been accused of antisemitism and found not guilty, that alone, is a very good reason to not drum people out of the party instantly. Not only that but if people do share social media posts of antisemitic tropes like Jewish bankers running the world or holocaust denial, shouldn’t the emphasis be on trying to educate first and if the behaviour continues to then expel? To be an anti-racist party surely that means to inform and educate to challenge racist views not only within its membership but outside of it? 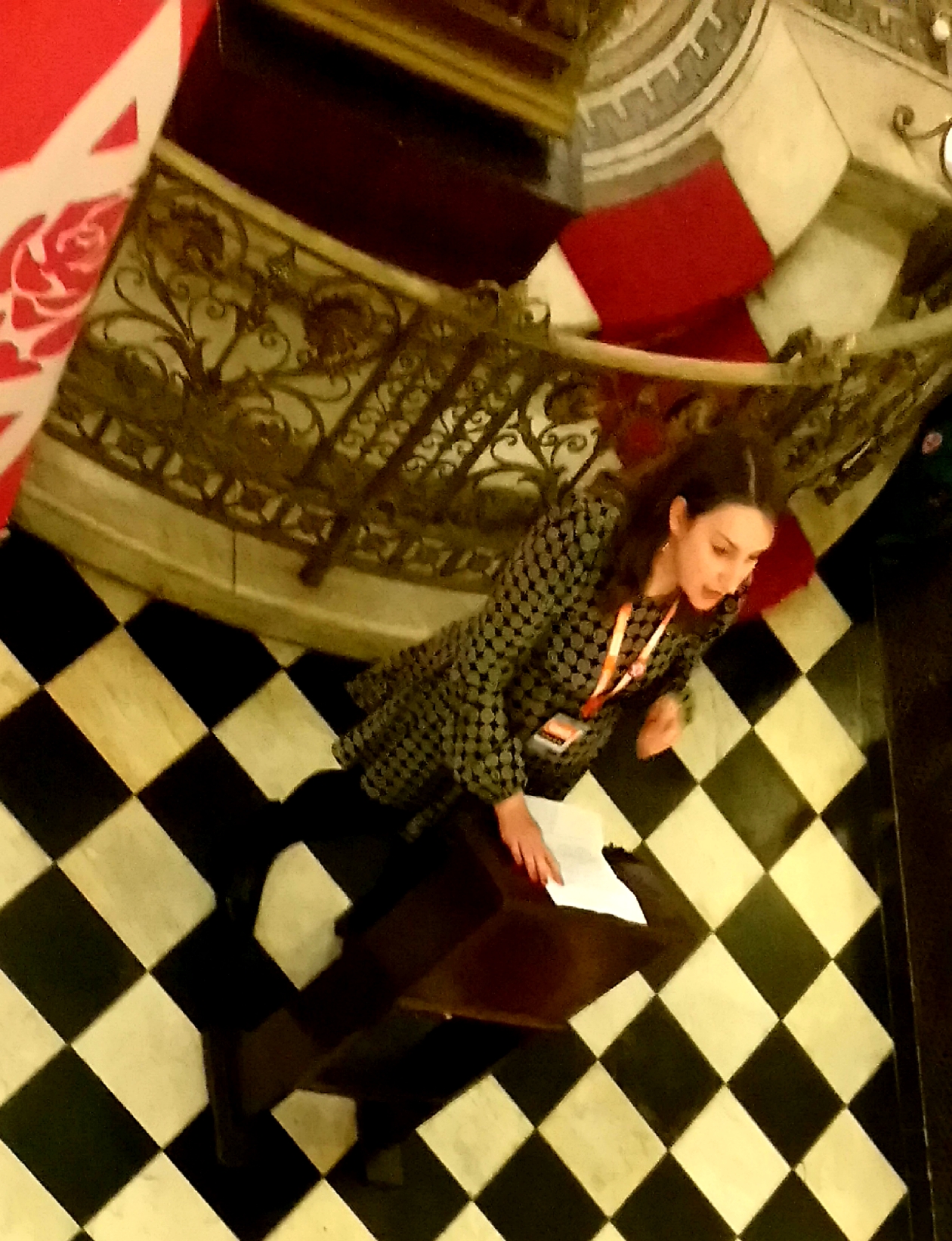 The national chair of young Labour Miriam Mirwitch also spoke entirely focused on antisemitism stating that the next generation will continue to focus on the fight against antisemitism.

The secretary of Labour First, Luke Akehurst was less enthusiastic than his colleague from Progress about their fight back against the left. “I’m not terribly optimistic we are going to meet with much success this week but you will see from our presence handing out our pink leaflets every morning that we’re fighting even though it is an uphill battle.”

He declared that standing in solidarity against antisemitism risks you losing your seat as a councillor or MP. It is a curious thing to say when so far the only MP at risk of losing their membership to the Labour party against their will is an MP that has always stood in solidarity with the Palestinians against Apartheid. 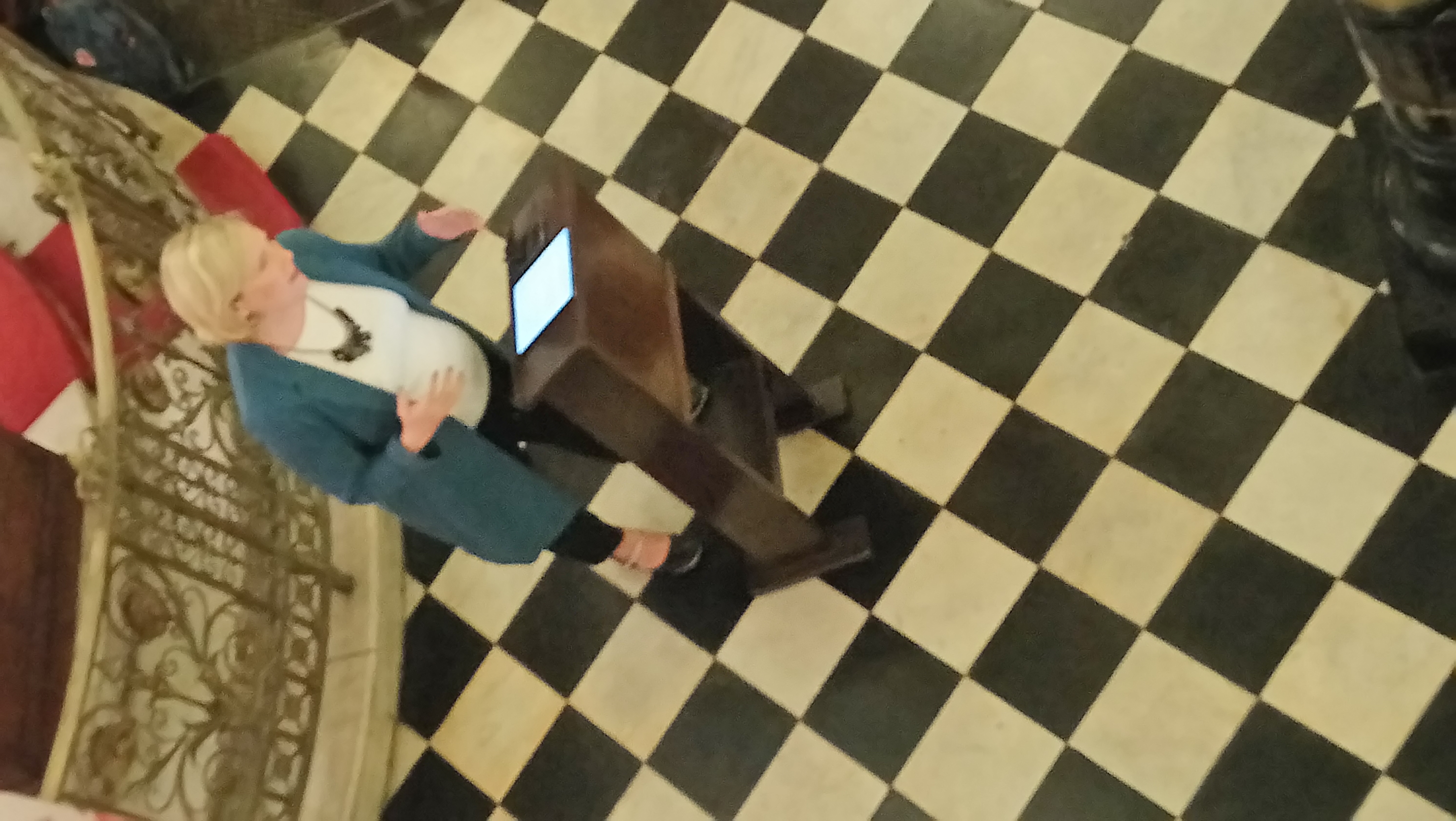 Stella Creasy MP quoted Kier Hardie but then went on to continue the accusations that Labour is stymying the EHRC investigation, “The language, the personalities, the blame, the abuse and the victories that we have seen from the hard left, its fellow travellers and indeed useful idiots, these last four years. I beg all of you in the JLM to never stop explaining and fighting and I pledge to stand with you as you do” Stella used emotive language to evoke the feelings of being at war throughout her speech including a promise. “You will always find people like Rosie and myself in the trenches with you”

Affiliate member of the JLM, Sadiq Khan, Mayor of London was the final speaker and he begun his speech saying “what do people think of Margaret Hodge? We respect you, we support you and we love you.” 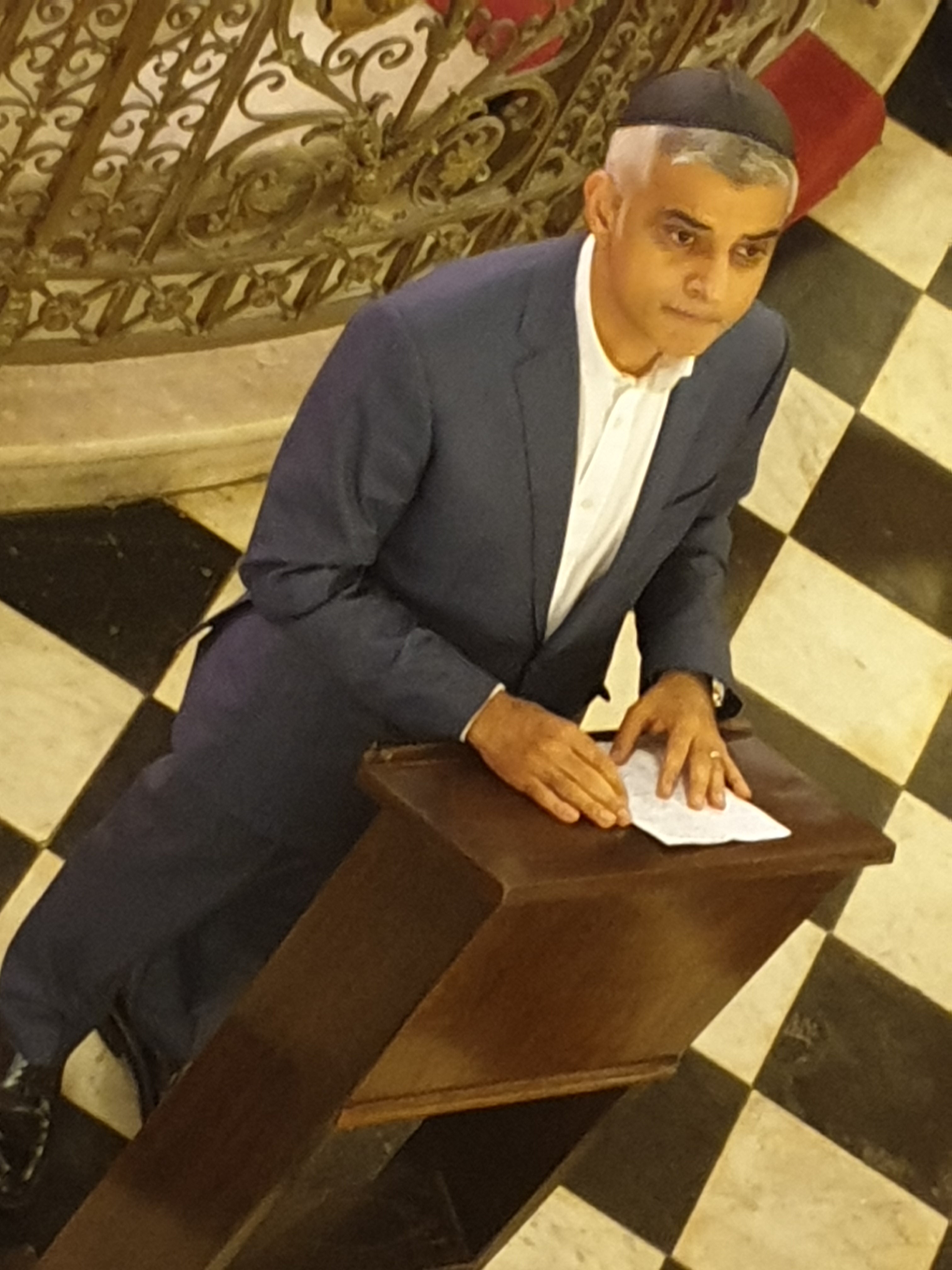 Leaving the synagogue there were plaques in remembrance of the atrocities of the holocaust which can be found below. Once again eye contact or acknowledgment of my presence was ignored, I felt invisible as I walked away from the building but with a sense that what the JLM stand for is not to eradicate racism or even antisemitism but to ensure that the democratically elected leader and the members that support him are removed from the party. 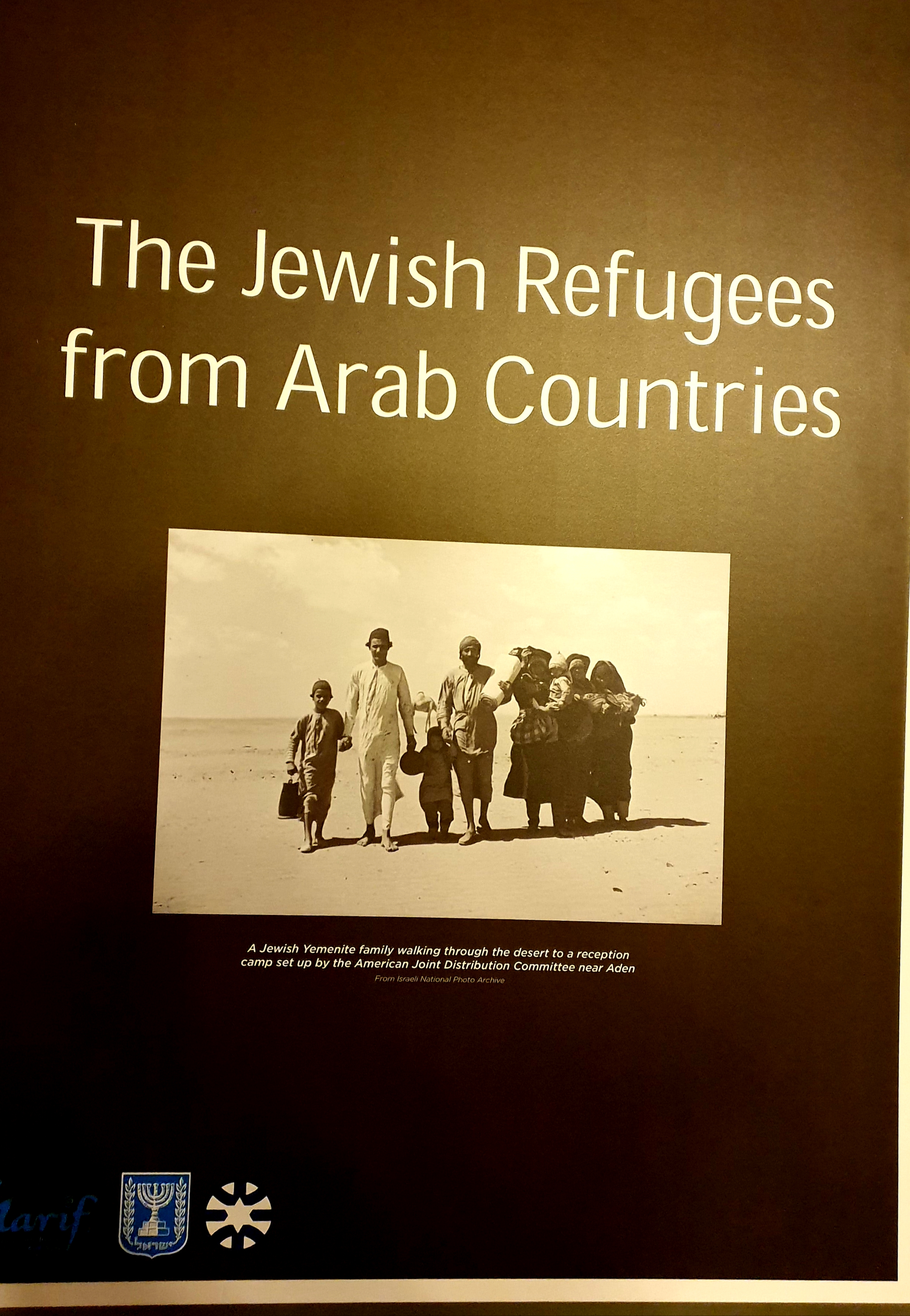 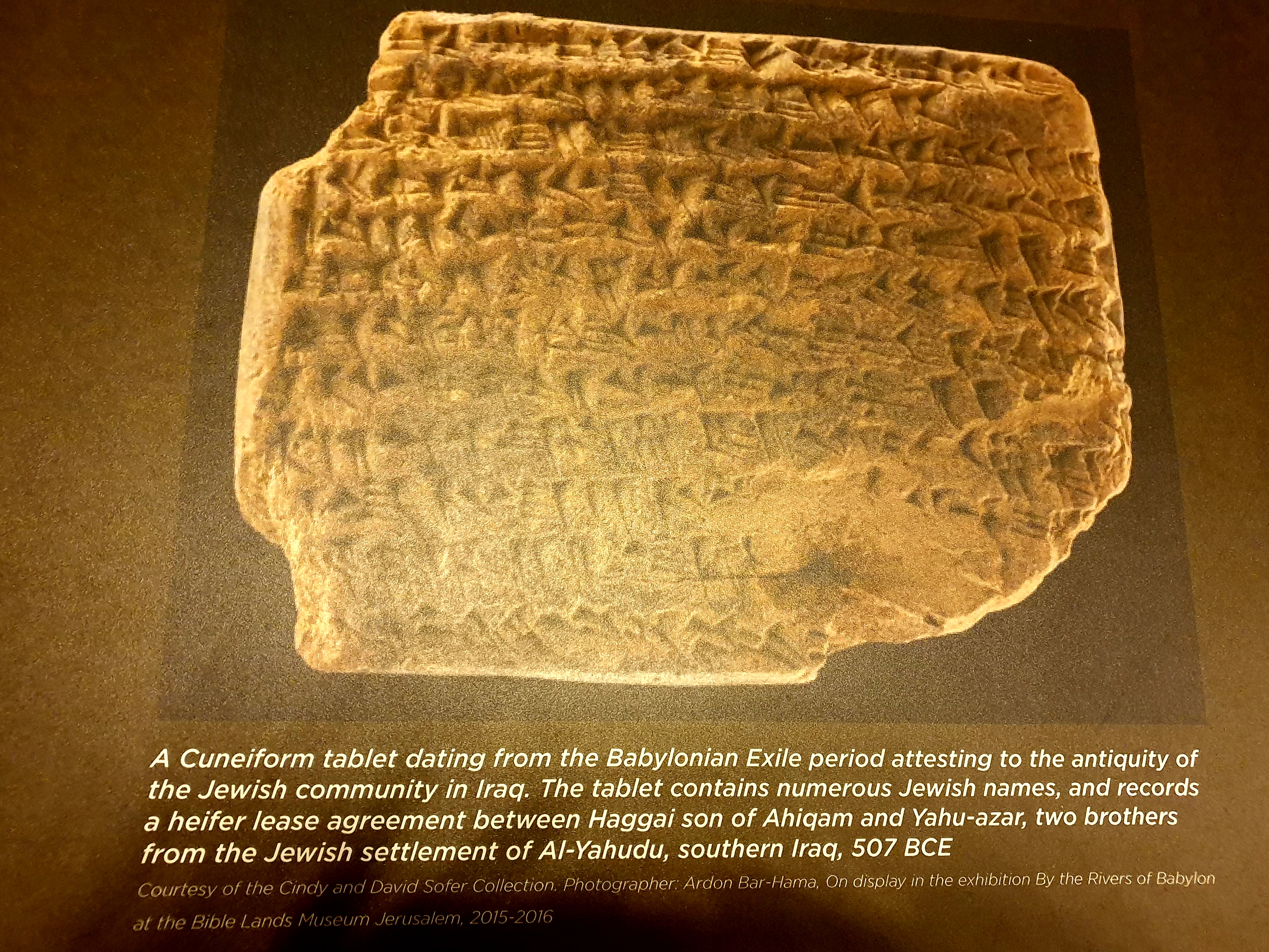 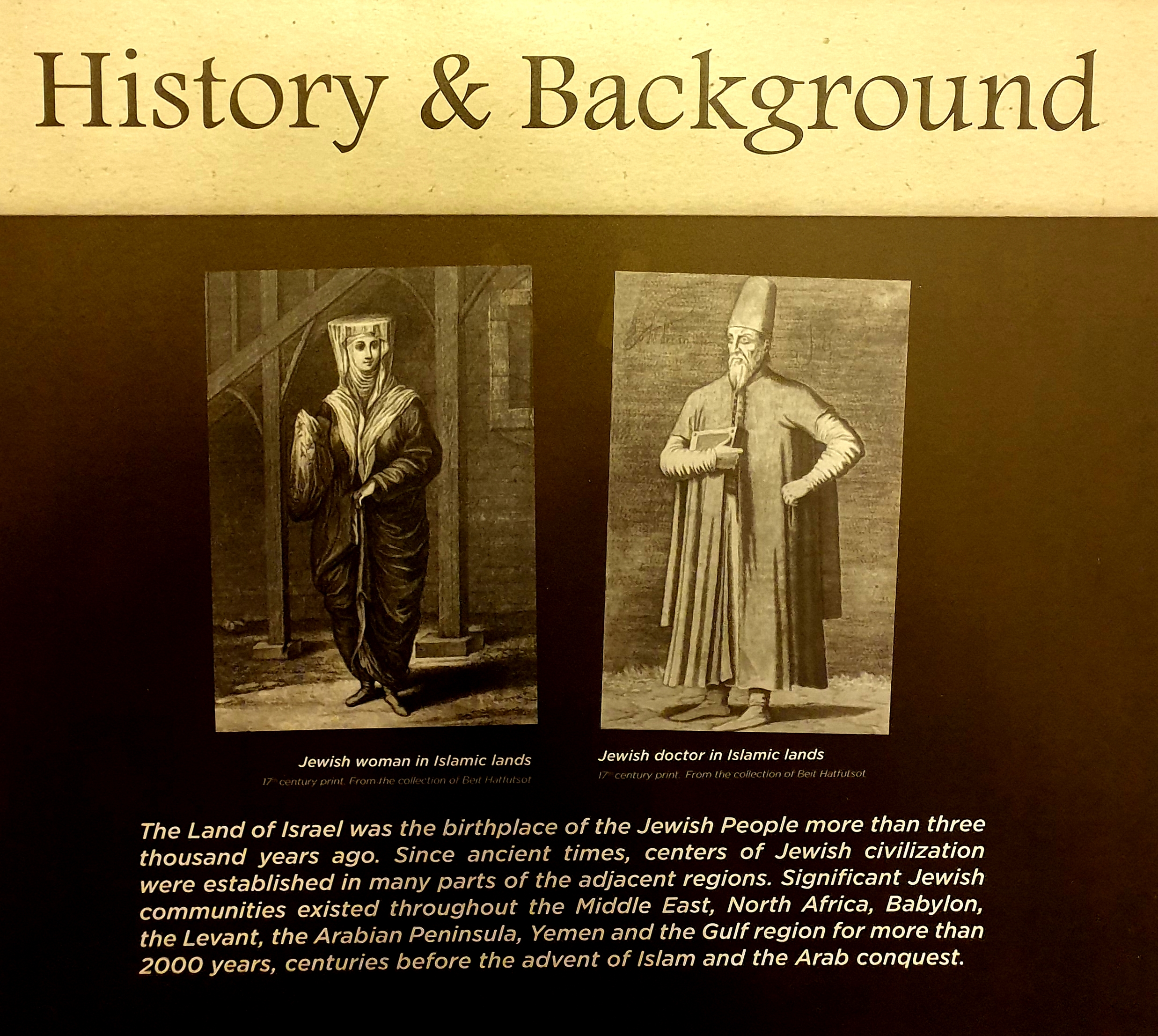 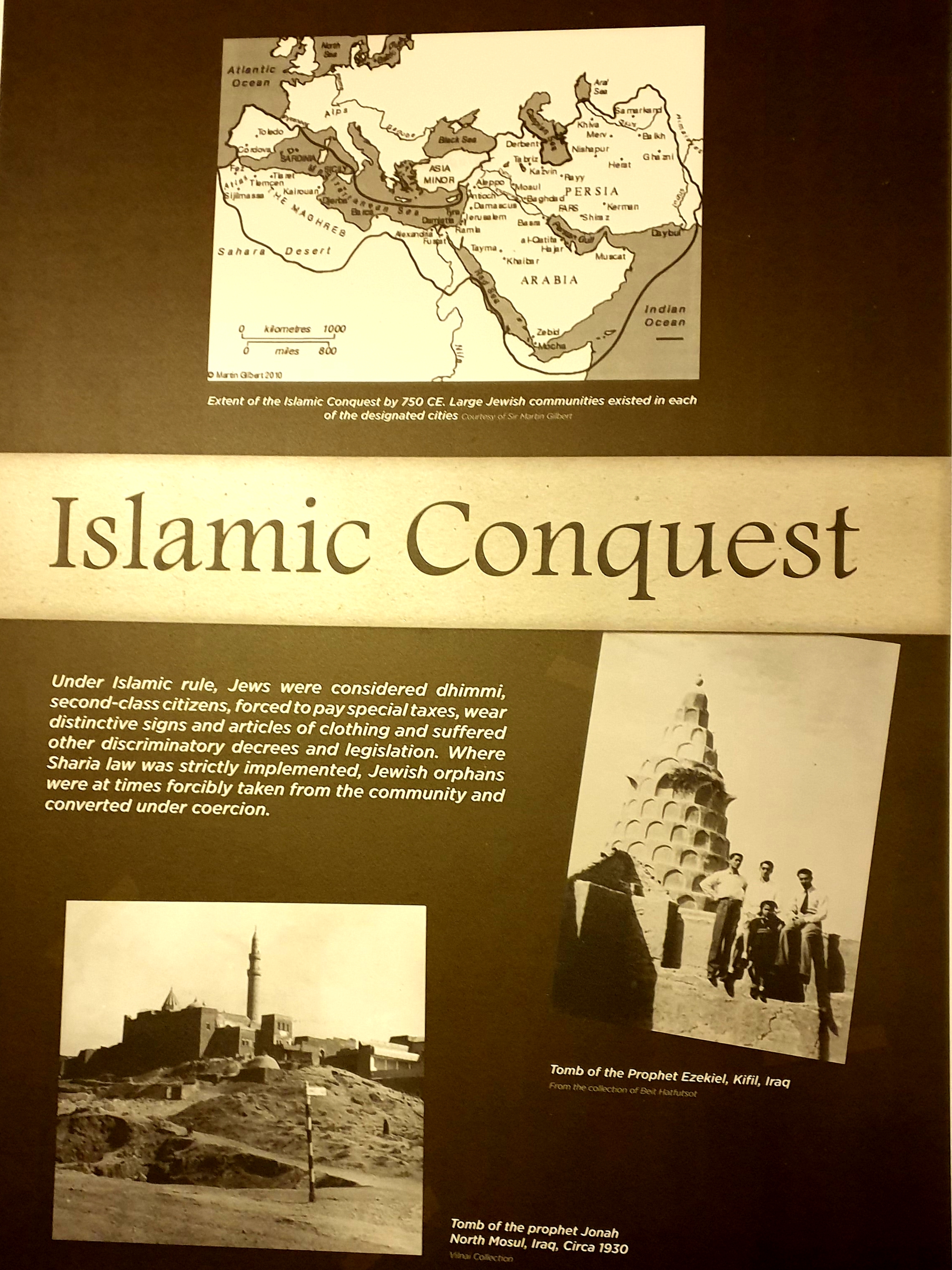 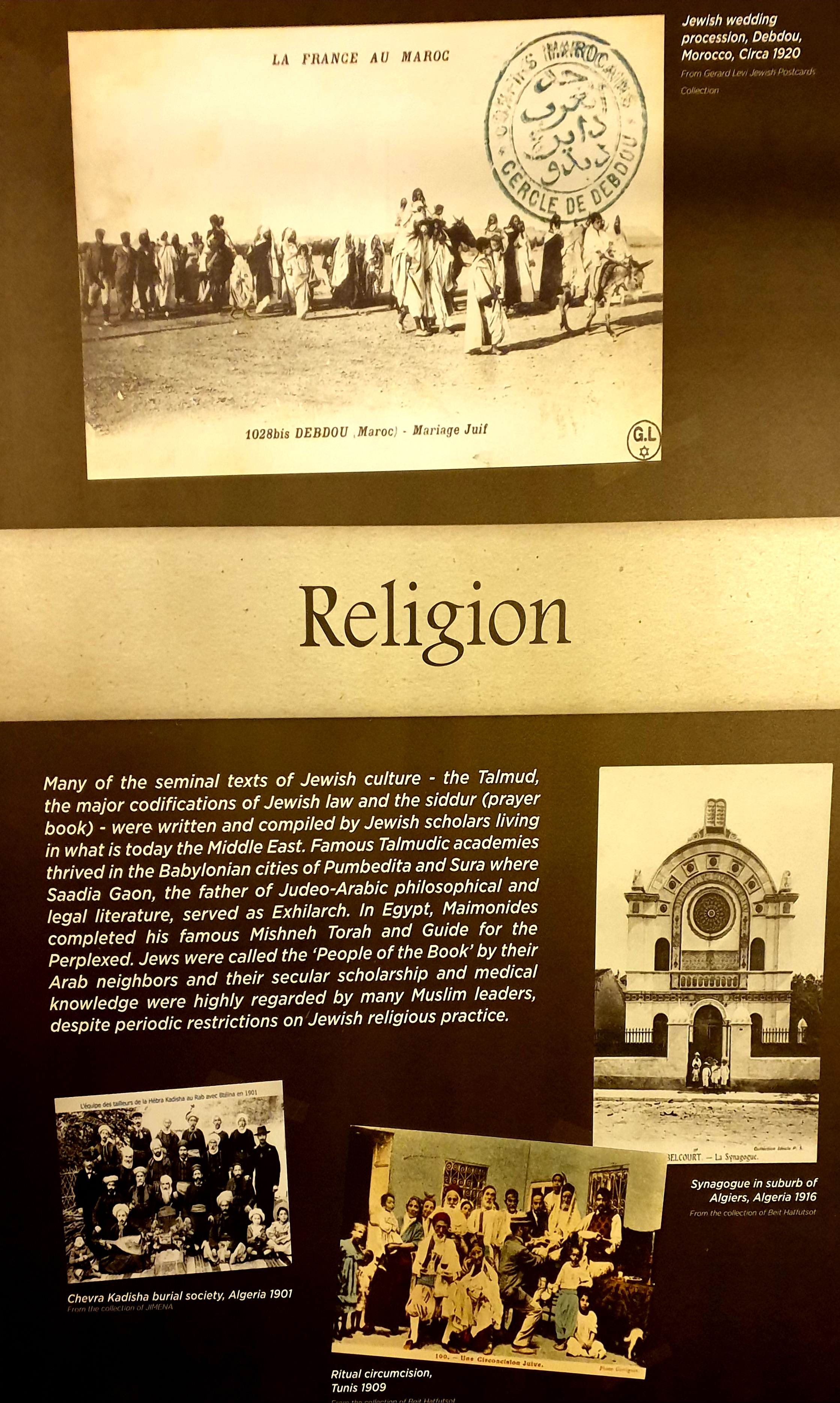 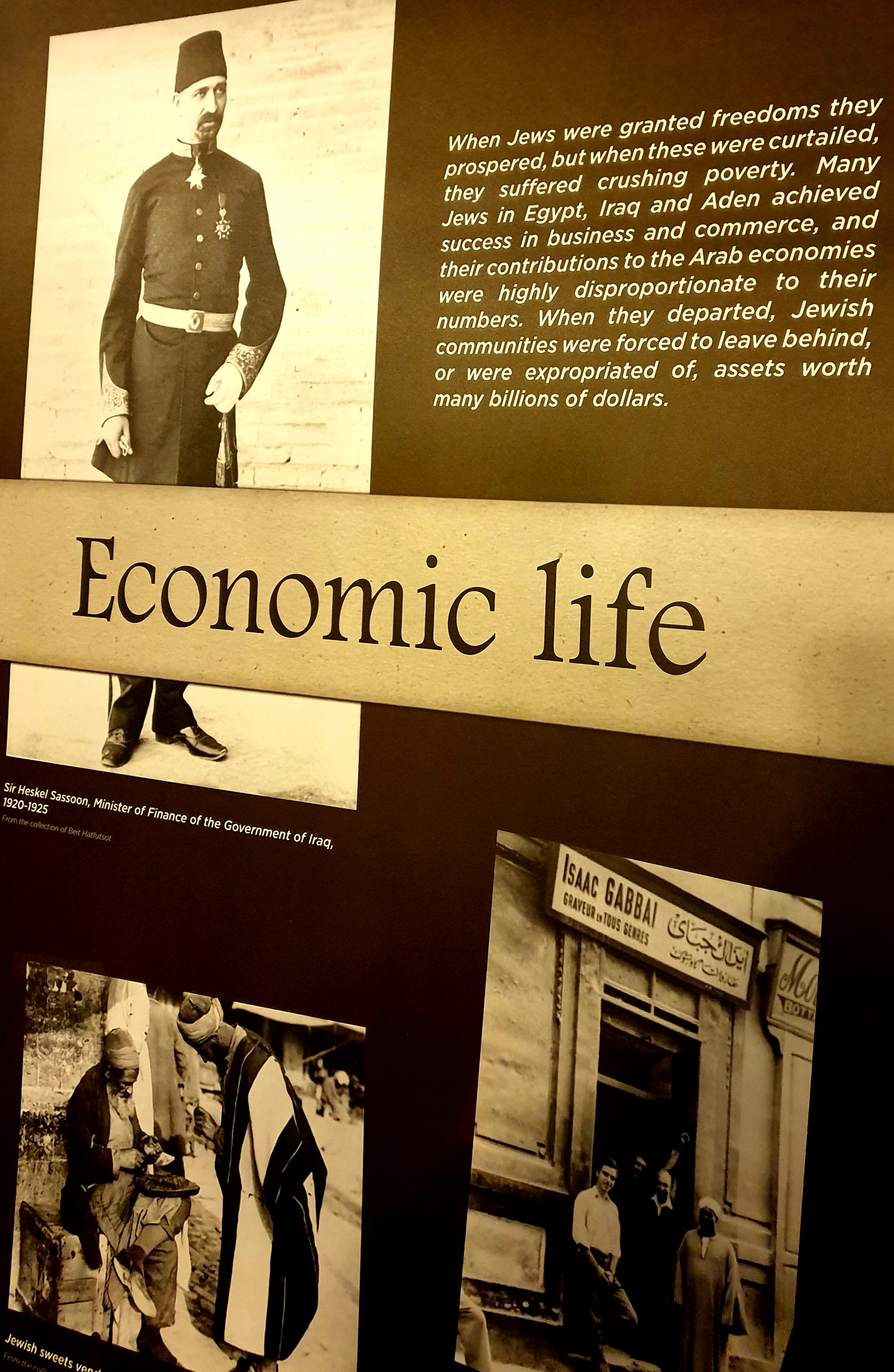 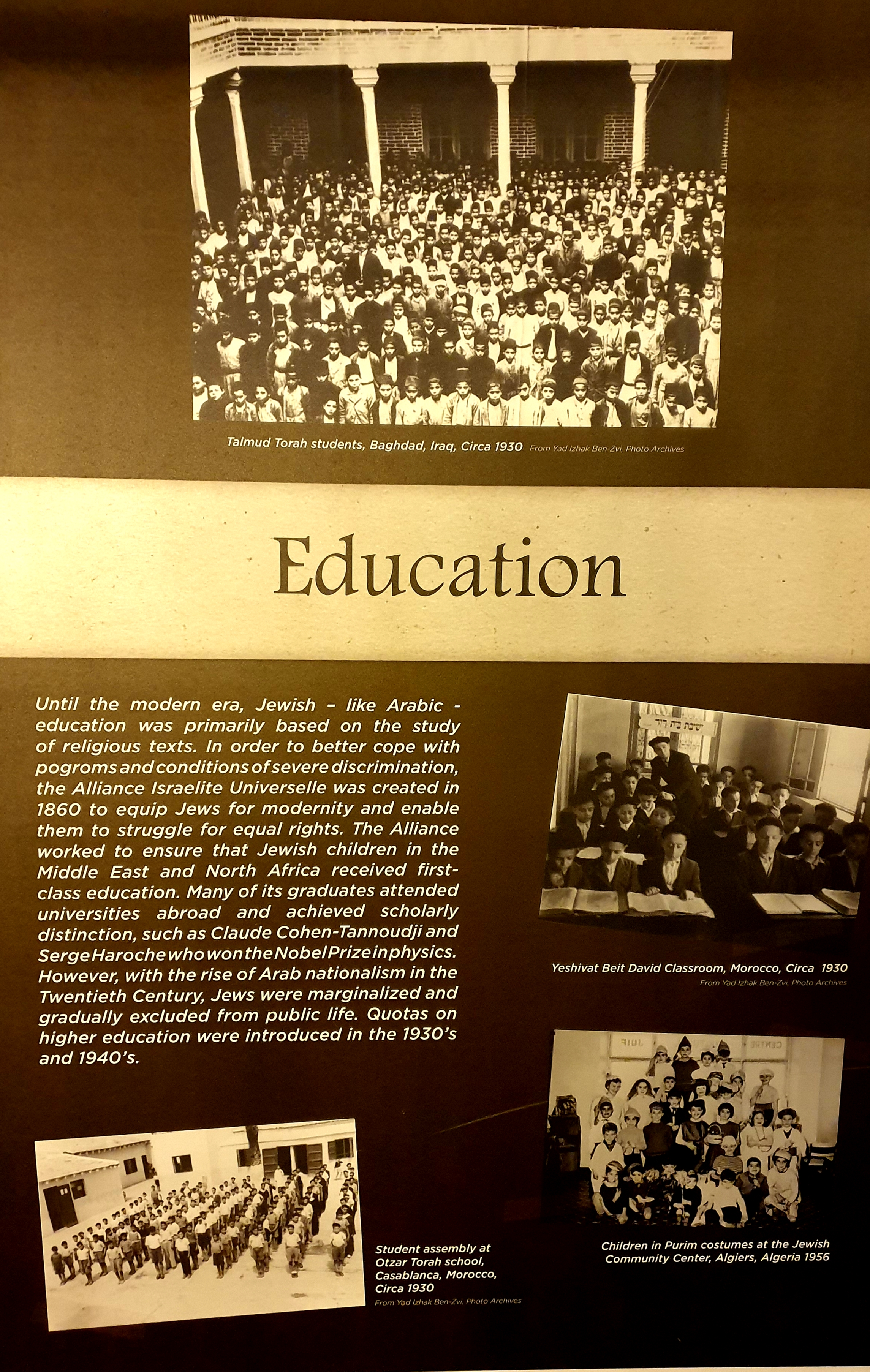 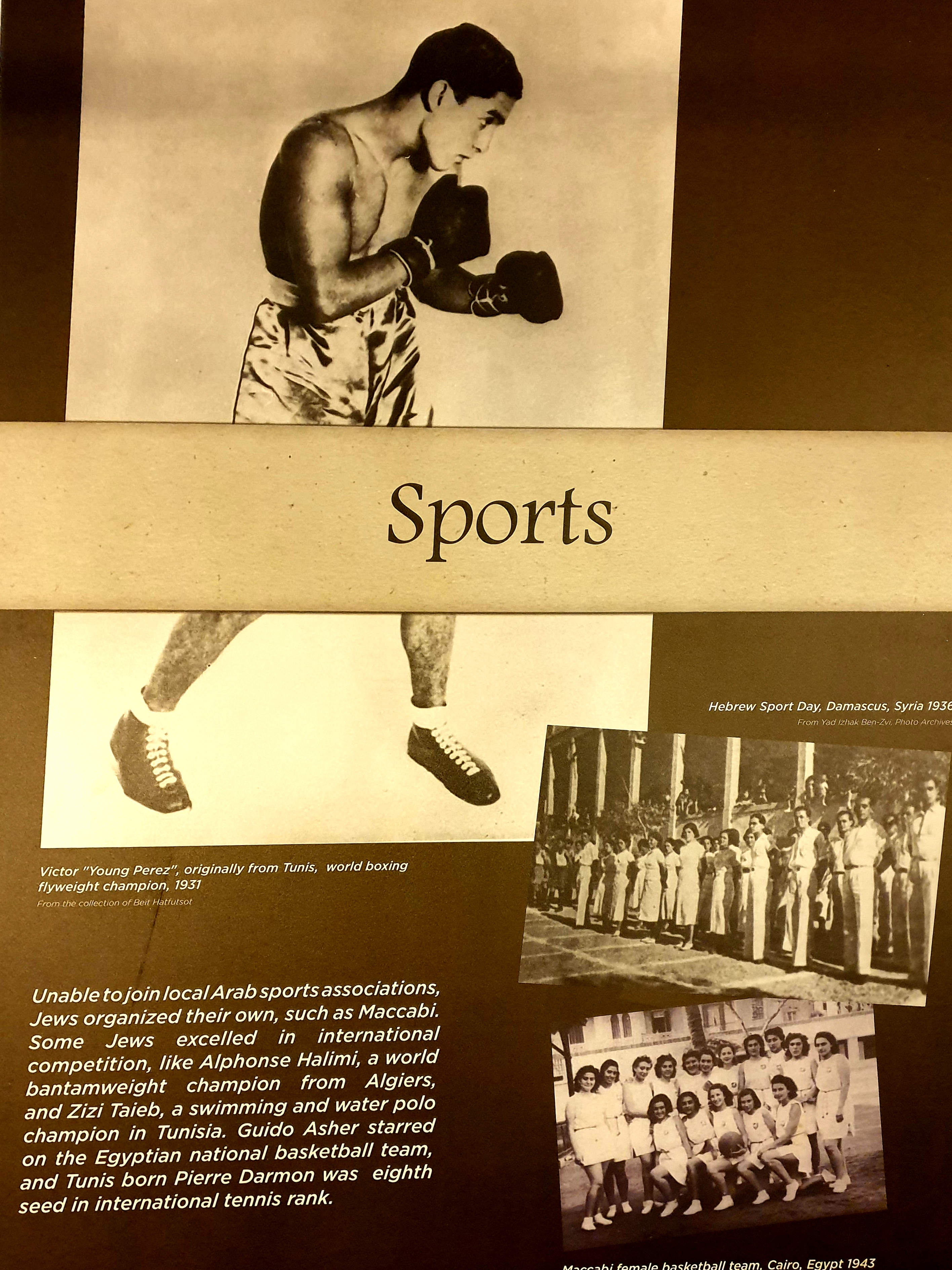 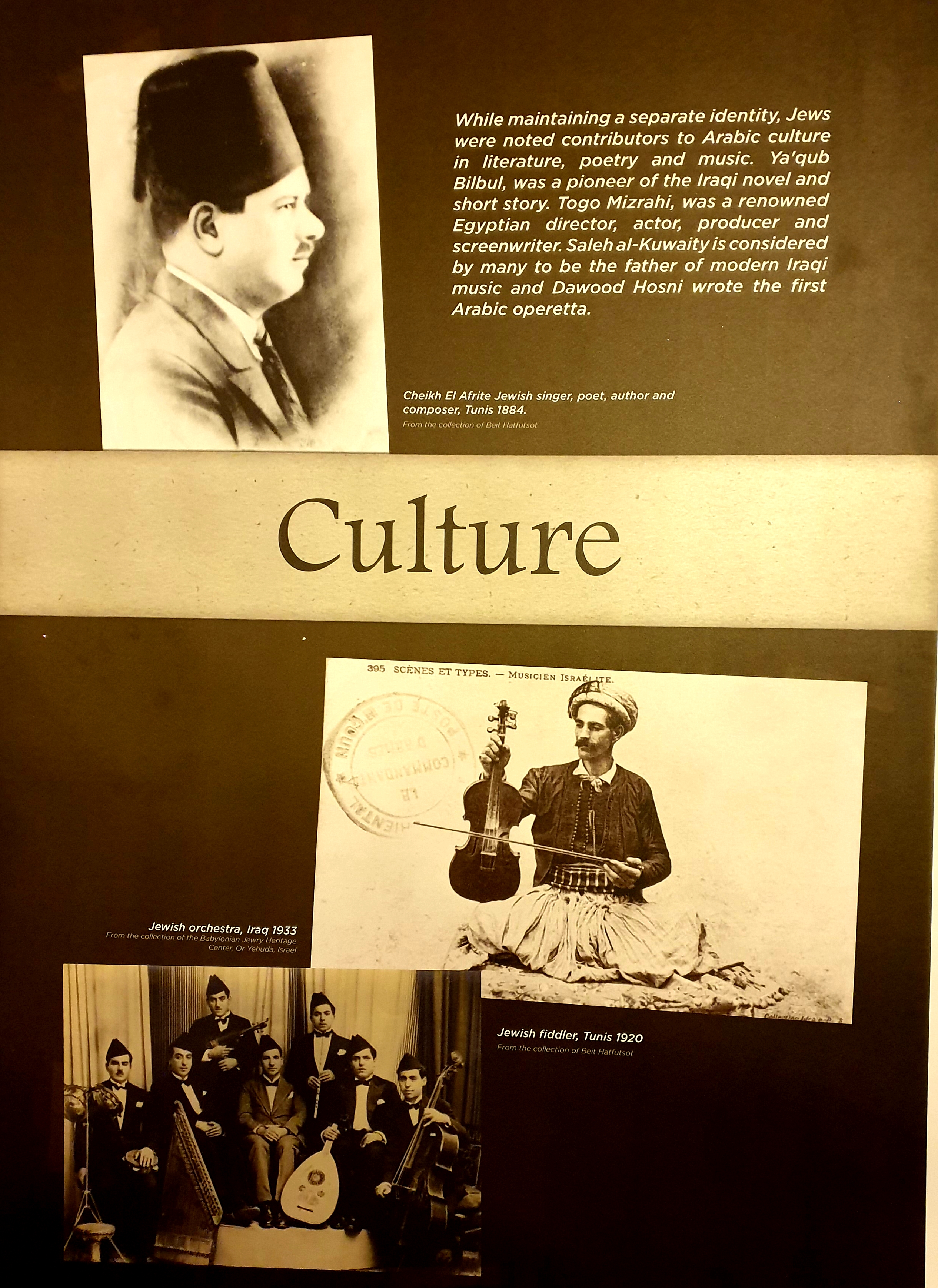 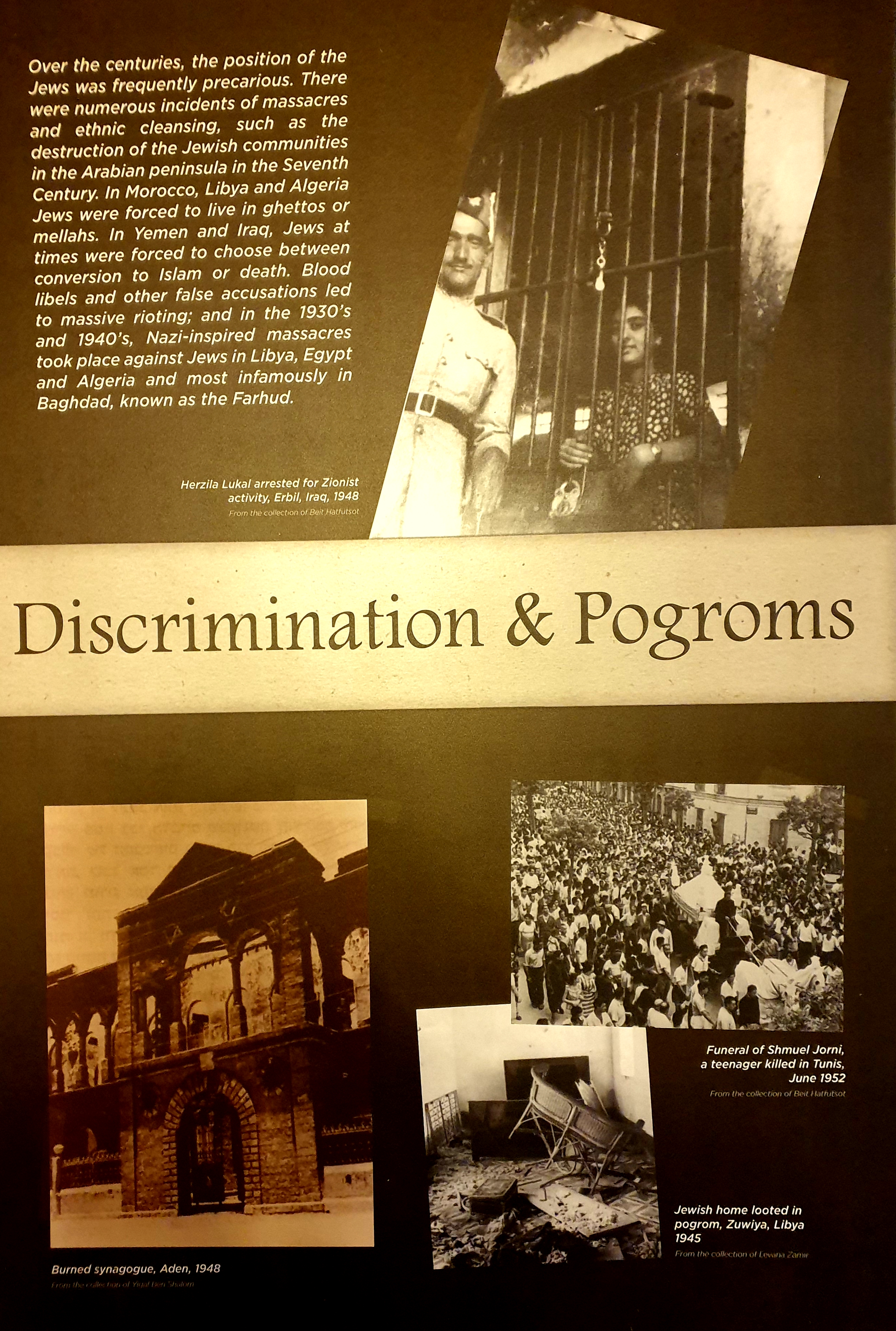 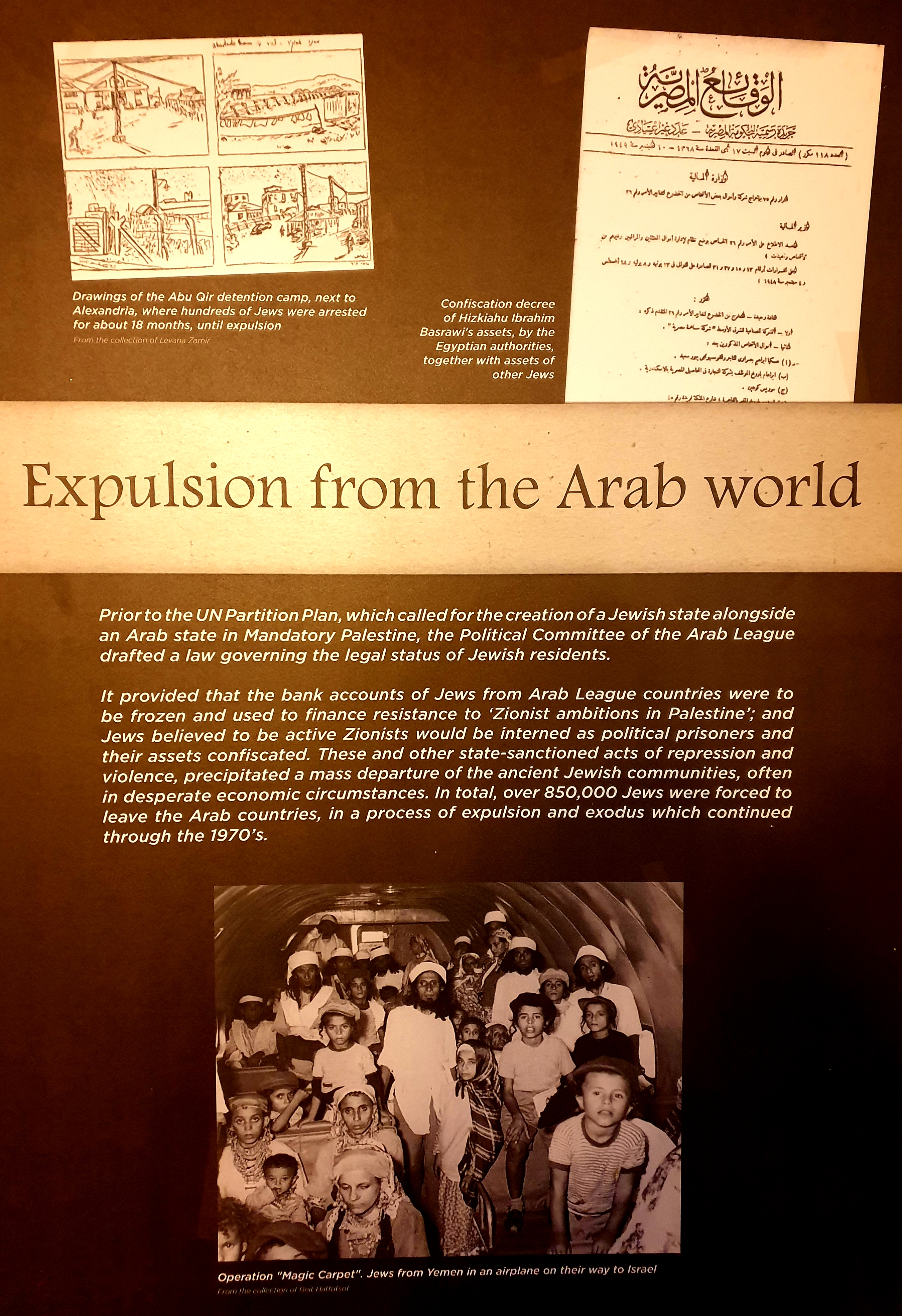 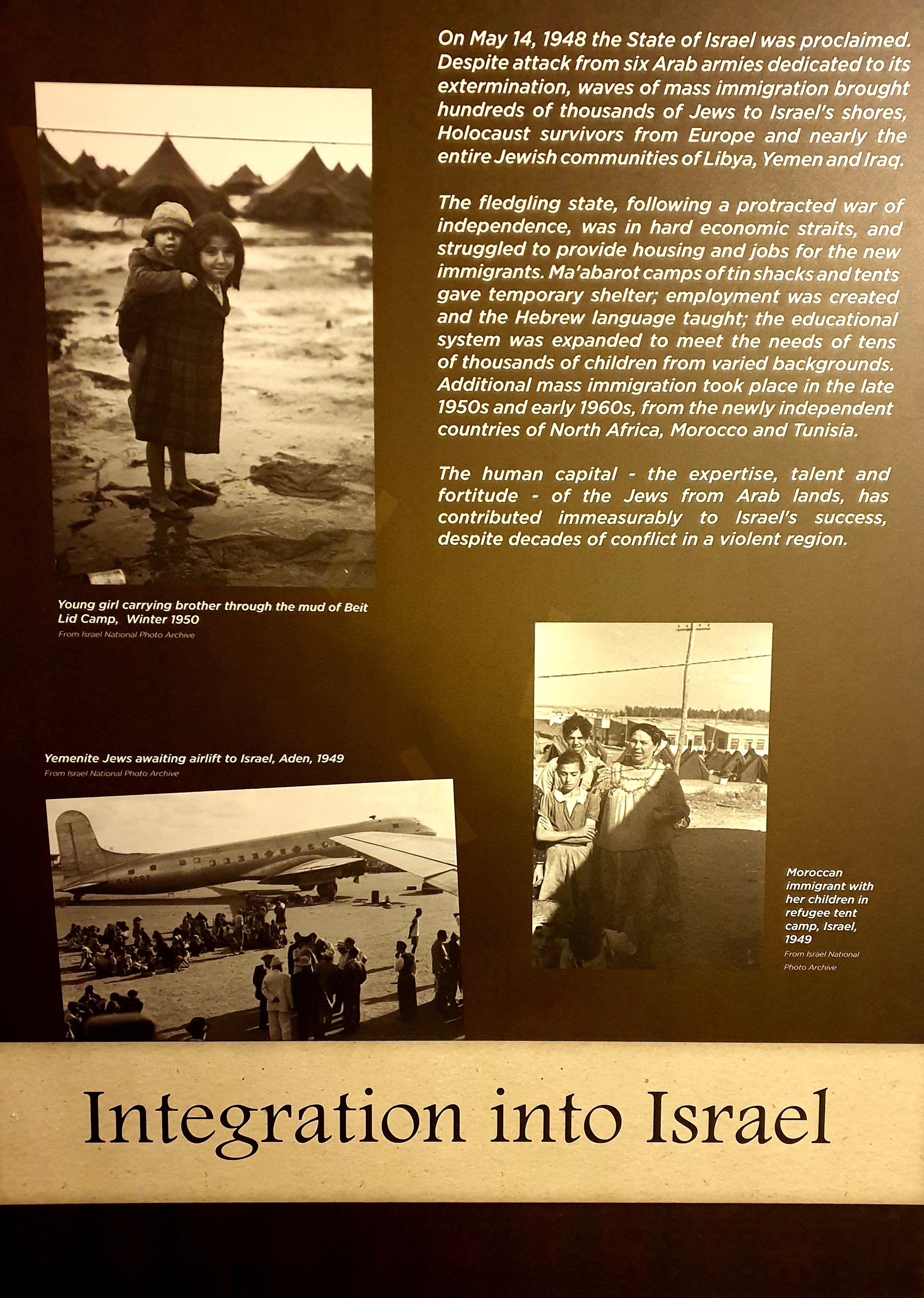 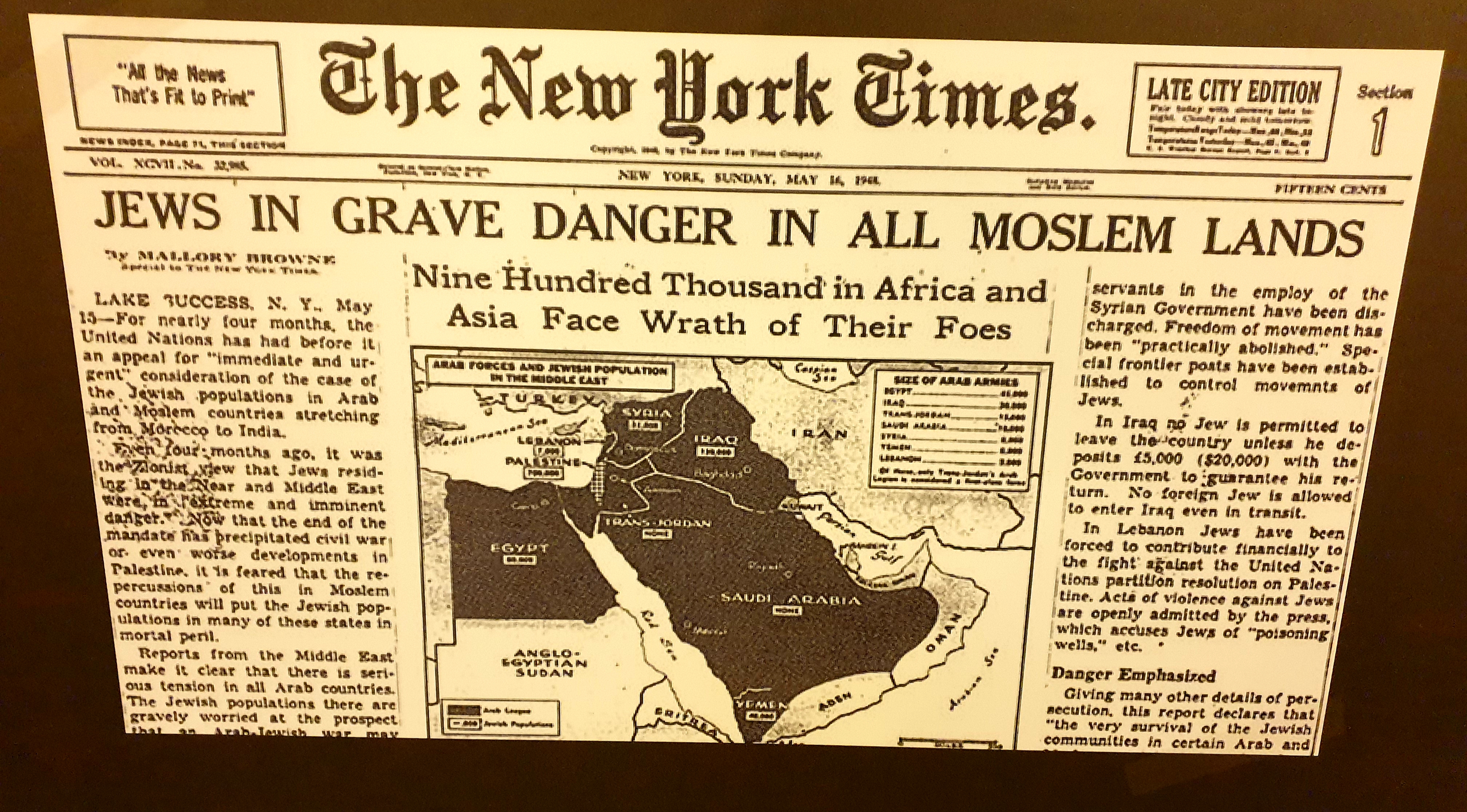 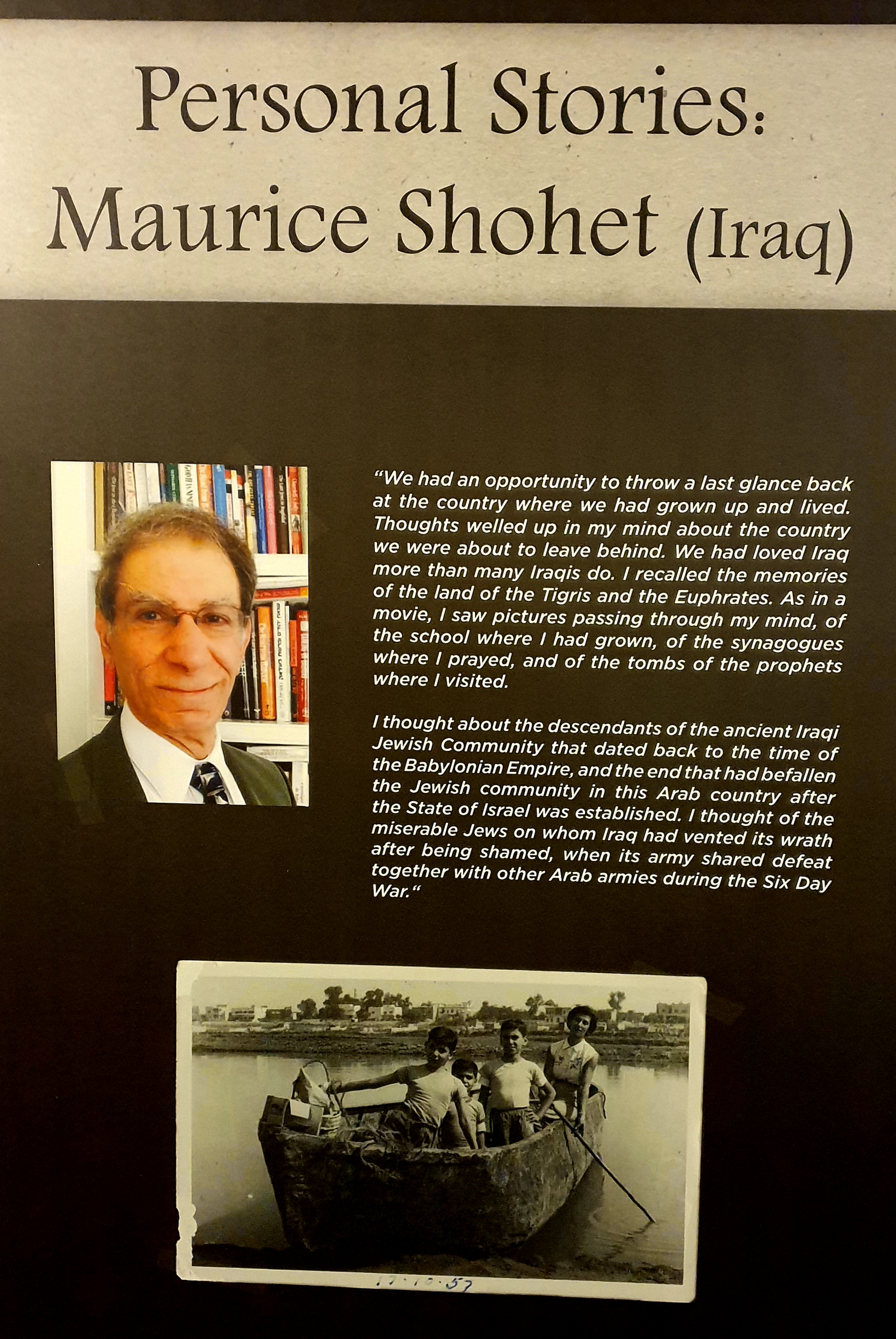 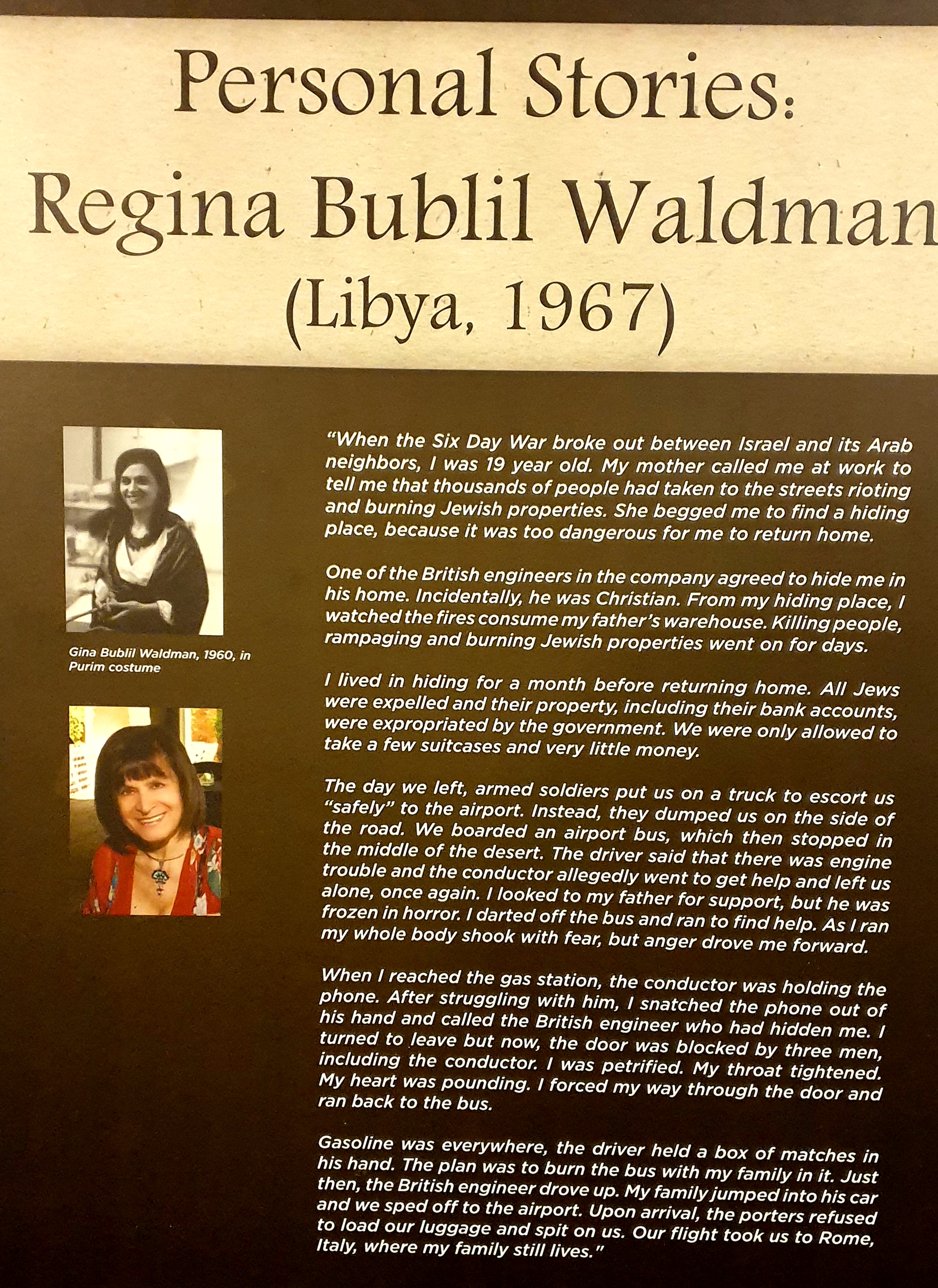 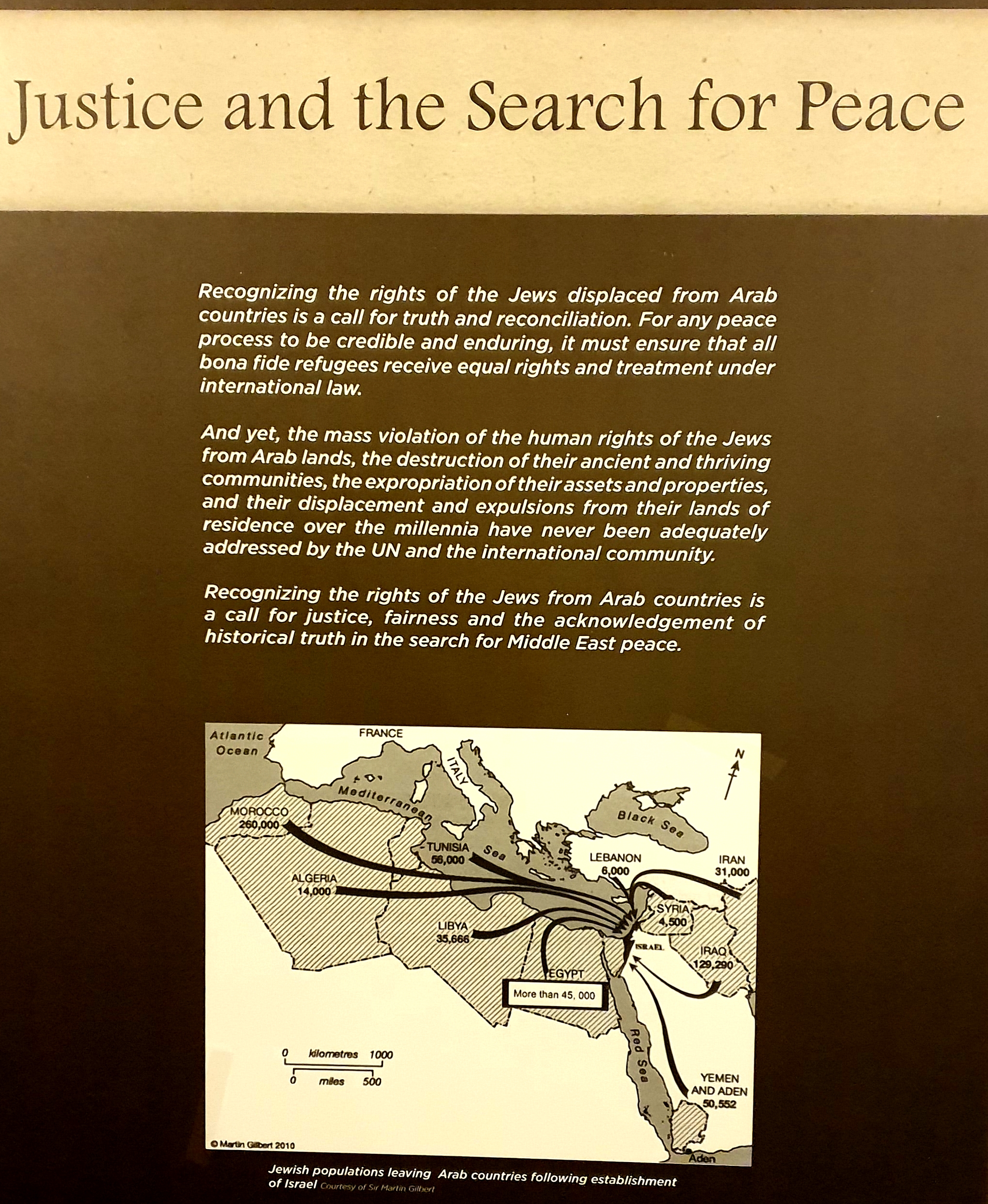