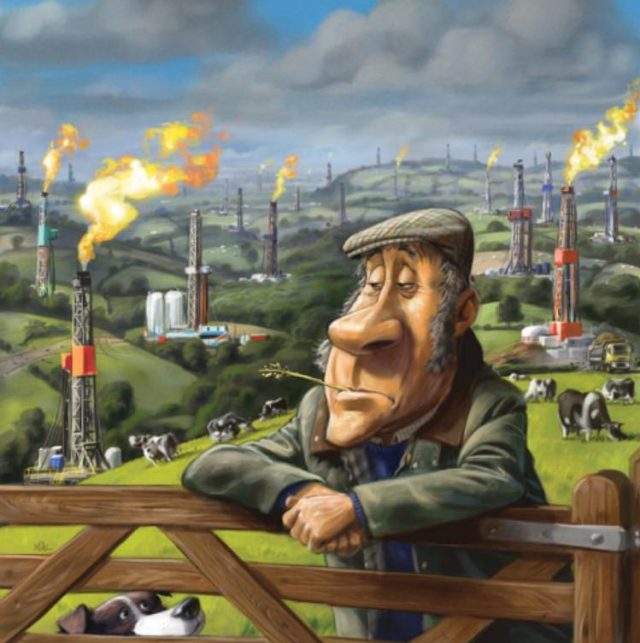 The decision by the Planning Inspector to allow INEOS to site their test drill at Bramley Moor, Marsh Lane will have come as a disappointment to anti-fracking campaigners and local residents. People are right to be furious. The 36 page report produced by Elizabeth Hill, the Planning Inspector dismisses as ‘minor’ or of ‘little adverse impact’ the detailed range of serious issues raised by opponents of the development marshalled by Eckington Against Fracking.

However, we shouldn’t be surprised. The entire planning process is skewed in favour of the frackers and against local communities. This is a pro-big business process whose rules and procedures are deliberately framed by the Tory government to facilitate the interests of their friends, the frackers.

The whole Inquiry process has been a powerful reminder of the way in which the decision-making processes are geared to serve the interest of the profits of capitalist corporations rather than those of people and the environment.

The Planning Inspector refused to consider broader arguments against fracking on the grounds that the application at Marsh Lane is only for a test drill and this is not part of the fracking process. Yet the report gives overwhelming weight to arguments in favour of fracking, stating that,

“great weight should be given to the benefits of mineral extraction, including to the economy, and exploration forms the first part of this process.”

So when it suited INEOS the Inspector was happy to suggest that an exploratory drill was a ’part of the process’, but when it came to hearing evidence against fracking suddenly exploration was a completely different process which has nothing to do with fracking.

The key concluding paragraph of the report makes it clear that the argument about fracked gas being vital to future energy security, about which she refused to consider any counter-arguments, was the key element in her decision making…

“I have taken into account all of the representations made. I have found that there would be slight harm in terms of the living conditions of neighbouring occupiers, in terms of night-time noise, to which I give limited weight. However, this would not outweigh the benefits of the exploration in terms of its potential to improve resources for energy supplies to which I give substantial weight.”

The Inspector wilfully decided to gloss over the fact that INEOS have made it clear that the ethane shale gas they want to extract from Marsh Lane and elsewhere will be used primarily as feedstock for plastics production, not for the “the security of energy supplies”. Her reports state that,

“The primary purpose of extracting the gas would be for fuel”.

This is simply untrue and the appellant, in this case, INEOS has made it clear that their primary interest in fracking is a source of ethane for plastics production. Then, having made energy security the key reason for her decision to support INEOS’s appeal she goes on to say…

”but, even if the gas were not used in this way, the appellant could use it as a raw material in their production processes, which would help to boost the economy.“

You couldn’t make this stuff up… Unfortunately, the Inspector did!

Some voices in the anti-fracking movement have argued that it was a waste of time and energy for Eckington Against Fracking to focus their attention on the planning application, as the result was a foregone conclusion. That in my view is mistaken. EAF’s powerful case as presented to the inquiry plays an important role in firming up community support for opposition to fracking.

Campaigners and the wider communities they seek to represent, need to feel confident that they have strong and sustainable arguments on their side and the case as presented by EAF and others provides a large range of strong arguments.

But, as we have seen, winning the argument doesn’t mean that you win a rigged and one-sided planning procedure. The key issue now for the anti-fracking movement locally is how we continue to develop a strong and effective activist campaign which can now move onto the next phase of the campaign.
This will have to focus on the short and medium term on frustrating, delaying and obstructing INEOS’s ability to develop their test drill site at Bramley Moor. In the longer term, we need to be able to prevent INEOS from moving from the exploration to the fracking stage. This will have to involve a range of mass mobilisations. Some people have said that now we have to make Marsh Lane our Bentley (after the site of the well known Australian anti-fracking victory) and take up some of the lessons of mass community based activism which proved so successful.

It’s inevitable that some of those most involved in the Marsh Lane campaign and living geographically closest to the site might feel demoralised by the outcome of the Inquiry. However, it is important to see this as one setback in what will be a long drawn out campaign in which our side will see a range of successes and also setbacks. It is important to note the strategic strengths of the anti-fracking campaign both locally and nationally.

On a national level, the campaign has been extremely successful in delaying and frustrating the stated wishes of the fracking companies to start production. The industry is way behind the timeline they originally set out to explore and start to frack in the UK. Each delay provides us with an opportunity to build the pressure against the frackers. Every month and year that goes by the case for renewable energy grows . Developing public concern about plastic pollution in our oceans and elsewhere provides us with a growing pressure to use against INEOS and their plans to use fracked ethane to massively expand plastic production.

The decision by Labour in their 2016 manifesto to explicitly reject fracking is also important and it is very welcome that now in North East Derbyshire we have a Labour candidate Chris Peace who is an experienced rights campaigner and a fierce opponent of fracking.

The fact that any incoming Labour government is pledged to withdraw the license to frack from companies like INEOS maintains a key pressure on them. However, it would be a big mistake for the anti-fracking movement to adopt a strategy of “waiting for Jeremy”; we need to build and sustain mass campaigning pressure on the ground now.

The position of the North East Derbyshire Tory MP Lee Rowley is of course a paradox. He has up to now been a firm opponent of fracking in North East Derbyshire (but not elsewhere where he appears quite happy for the frackers to operate at will), yet his seat in parliament helps prop up a Tory government still 100% committed to fracking and supporting the interests of corporate power.

Locally the anti-fracking movement has many real strengths. There are vibrant well rooted groups in communities across North Derbyshire, South Yorkshire and North Notts who will be on hand to help build and sustain mass campaigning. There are scores of now experienced activists well versed in the arguments and willing to do the campaigning work. Importantly we are “early adopters” of anti fracking campaigning.

Despite the setback of losing the Inquiry, INEOS are still a very long way from getting a single cubic meter of fracked gas out of the ground. Anti-fracking campaigners in Lancashire and North Yorkshire, where the process is far more advanced, have shown how active and vibrant campaigns can continue to frustrate and delay the ability of the frackers to start the actual process of extracting gas.

Jim Ratcliffe the INEOS boss has just announced that he is leaving the UK and moving to Monaco…. good riddance!

Let’s make Marsh Lane the place where he regrets ever embarking on his fracking plans.

The Tory government, the key supporter of the frackers is weak and divided. A powerful and successful anti -fracking movement can be part of a process that defeats them and begins to open up the possibility of a world where the priorities of people and planet are put before the profits of giant corporations like INEOS.

Local democracy suffered another setback yesterday from the Tory Party under the guise of the Planning Inspectorate.

In February 2018 the Planning Committee of Derbyshire County Council turned down an application by INEOS to drill a test well at Marsh Lane near Eckington in North Derbyshire by 9 votes to 1. Reasoned arguments were presented by those opposed to this insidious industry, which is an ecological time bomb just waiting to explode and were accepted by the Planning Committee.

However, the Tory Government which has a duty to protect the population of the UK has embarked on a programme of over-ruling local democracy, not only overturning the decision by Derbyshire County Council, but last year they also overturned a decision by Lancashire County Council to not approve an application by Cuadrilla to drill at Preston New Road.

These decisions by the current Government which is slowly but surely morphing into a dictatorship put the local populations at risk of contaminated aquifers/drinking water, increased traffic disruption, seismic activity/earthquakes and exposure to carcinogenic chemicals.

Perversely on the very day that the Government released it’s attack dog aka the Planning Inspectorate a Government survey concluded that 82% of the population supported renewable energy yet they still persist despite all the warnings of global warming to promote and support the extraction of fossil fuels.