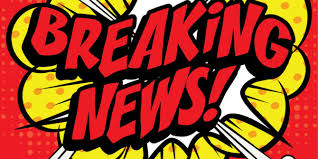 There was still some bad publicity on Monday following Tory MPS using food banks as photo opportunities last weekend. Some would say because they’ve put in place and voted on all the policies that put people in a situation that required food banks in the first place. However, we all agreed in the office that the poor Tory party just can’t win, do something nasty and they get berated for it and then when they pretend to be kind and thoughtful they get berated for it. What are they supposed to do? One of our interns said perhaps they could initiate policies that help people and not destroy their lives. I threw an empty champagne bottle at him and sacked him on the spot, after paying a silence fee for abuse in the workplace

Philip Schofield made Theresa May malfunction quite drastically by asking simple questions about Brexit on This Morning. Theresa May dithered and stuttered through the interview leaving us all wondering why we’ve been supporting her for so long and if she can’t even get through a simple morning TV interview with an ex-childrens presenter that used to work in a broom cupboard we are all doomed…

David Attenborough gave a speech at the United Nations climate change summit in Poland and stated that the collapse of civilisation and the natural world is on the horizon. Attenborough said: “The world’s people have spoken. Time is running out. They want you, the decision-makers, to act now. Leaders of the world, you must lead. The continuation of civilisations and the natural world upon which we depend is in your hands.” So we decided we were going to be better behaved and recycle and all that green stuff but by the next day, we’d already forgotten.

Jeremy Corbyn was accused of blocking an appointment of Jess Phillips to the parliments standards committee, secretly we thought this made sense. She is one of our favourite Labour MPs to use against Jeremy Corbyn and doesn’t actually seem to have any standards anyway.

The French continue to protest today with firefighters, police and ambulance crews uniting and standing with them. This news went straight into the bin as approval ratings for these protests grow across Europe the last thing we want to do is inspire the British people to stand up for themselves.

The biggest news of the day was finding out that the DUP co-authored a letter asking the Speaker of the House of Commons to hold Theresa May’s Government in Contempt of Parliament. We’re glad to see that £1 billion pounds was a good investment for the country…

A group called Welfare Rebellion have become active on Twitter and ask that people join them in sending junk mail to Theresa May at 10 Downing Street in protest of all the junk she is responsible for. It wasn’t even a decision to not give this any coverage, we absolutely won’t cover this junk.

Two-hundred cross-party MPs agreed to divest in fossil fuels, they all agree that in the current climate it is absolutely irresponsible to be investing in fossil fuels. If it had been yesterday after hearing David Attenborough speak, we might have agreed but today all I’m worried about is Daddy’s share prices falling and then he won’t buy me the yacht he promised me for Christmas. I hate having to borrow his.

The biggest news of the day… Theresa May’s Government was found to be in Contempt of Parliament, this has never happened to Parliament before, like ever… It is pretty awful news but we decided to spin it. No one understands parliament and its weird traditions as it is all so archaic so we decided to promote it as a great new and wonderful thing.

“Theresa May’s Government has made history in Parliament today” 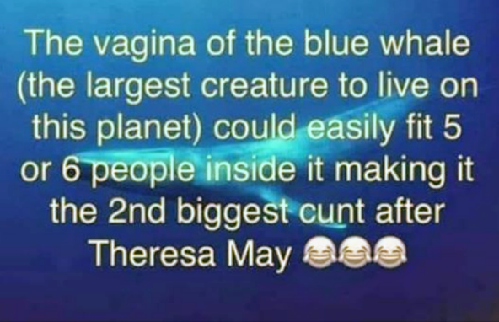 The alternative would have been inching ever closer to Jeremy Corbyn in number 10 and an end to austerity, corruption and injustice, which would be nothing but a nightmare!

£56 billion pounds was wiped off the FTSE 100 in the biggest market fall since Brexit but no one can blame us this time! Blame the overpowered Wotsit, of course we mean Trump. Once again he’s being a bit of a twat and is igniting a trade war with China, which also entailed arresting a Huawei executive in Canada.

Theresa May sends her remaining loyal Ministers out across the country today with the mission to gain support for her Brexit deal. 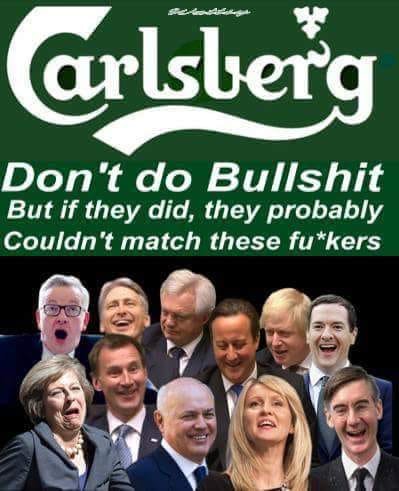 Theresa May found something in common with many being transferred on to Universal Credit this Christmas as they all wonder how and if they will survive Christmas.

Dominic Raab tried to regain his reputation for having a brain by actually talking a little sense for once. He said Mrs. May has to say no to Brussell next week in order to save her job and Brexit! Nope still pretty brainless, we’re not sure Theresa could do anything now to save her job or Brexit. That ship might have sailed, but not from Dover because that isn’t an important trade route, right Dom…

One of the dwindling loyal members of May’s Government set to work trying to convince the country that Theresa May’s Brexit deal is not going to be a failure by making black pudding. Yup, we don’t have to worry about starving if we can’t arrange trade deals, there is so much blood on the Conservatives hands they can feed us with black pudding. Brexit is saved!

Oh yeah, we said dwindling loyal ministers to May, another one bites the dust today as Will Quince resigns from the cabinet over May’s Brexit deal.

Protests in France continued as hundreds were arrested in Paris, the army was called in as the police had sided with the people. We tried very hard to ignore this news but Unity News was on the scene in Paris and sharing pictures on social media… We really dislike Independent Media undermining us and our control over the news.

Dominic Raab once again showed his unrivalled intelligence today after he blocked BBC journalist Victoria Derbyshire on Twitter. Raab had joined the Tory food bank PR stunt and Victoria Derbyshire cruelly highlighted Raabs prior comments stating that people using food banks had cash flow problems and weren’t languishing in poverty. Raab instantly put the kibosh on her ever sticking her ore in on his tweets again! 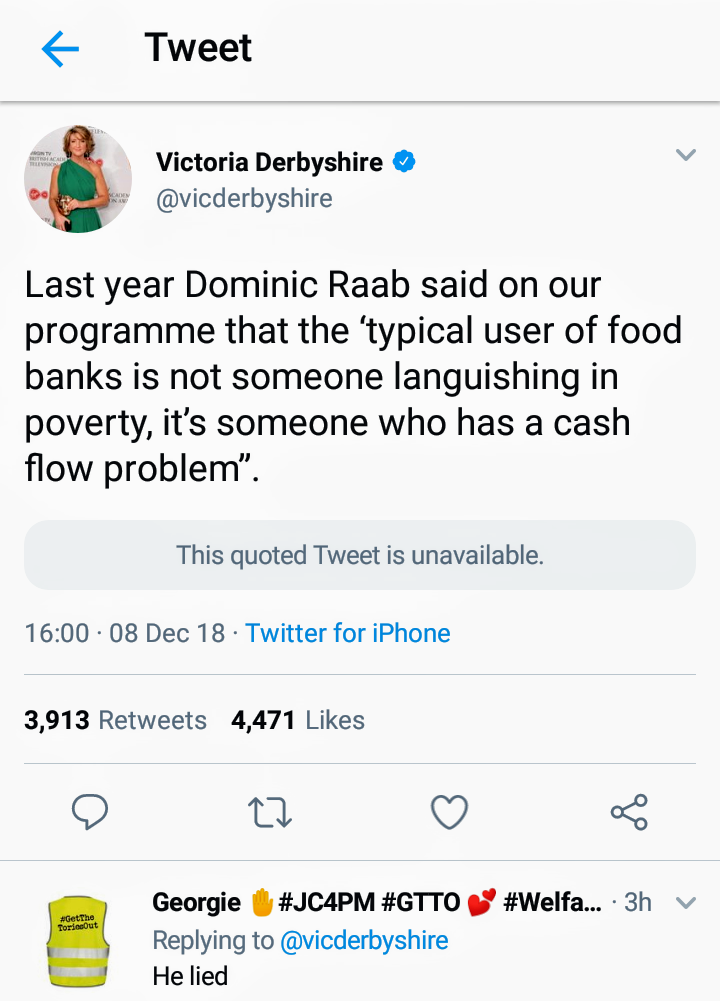