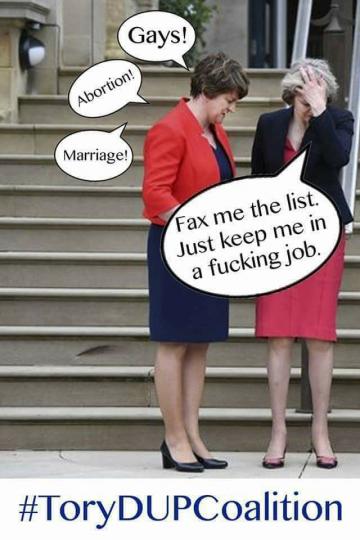 Editors note :
We started to get numerous requests for publication of Northern Irish referenced political posts but didn’t have an editor with the requisite knowledge . So we are proud to introduce our young intern Cara Ellen Rose .
The following piece is her first so please don’t be too harsh if any errors are contained because it’s not her fault it’s my fault as editor .
It is an observation and opinion piece so feel free to differ

Major errors and calamities have beleaguered the conservative government over the last year .

Could a coalition of chaos with the DUP be the final straw for Teresa May?

With much hostility on the streets amongst the public due to austerity cuts and a dubious Brexit referendum result and main stream media struggling to find a narrative to paper over the cracks of a shoddy and shambolic snap election, it would appear May’s days as Prime minister could well be on course for a quick exit out the back door.

The Democratic Unionist Party could be seen by many as a culmination of the extreme values many in society have become increasingly disenfranchised by.

Their extreme right-wing ideologies stem back to days when they were known as the Protestant Unionist Party with their strong historical links to the Free Presbyterian church of Ulster, who describe themselves as fundamentalist, evangelical, and separatist.

This does not impart feelings of warmth and security to the public , it could be argued that their severe ideology could give the conservative government an even frostier edge in the eyes of the public.

Many beliefs held by the DUP could be detrimental to the freedoms afforded to us in the UK and giving this party a platform to express views that oppose these freedoms could be met with venom from the public.

Many of the DUP’s core beliefs also clash with current law and legislation in the UK, and could cause tighter restrictions here .

The current HMRC tax credits system states that the third child and above will not receive cover from tax credits, no matter how needed it is.
This caused outrage when it was announced and the only exclusion to this rule are people who can prove they have been a victim of rape, causing those who fit these criteria untold torment and suffering in being forced once again to relive the torture they experienced.

But this issue could become even more complex with a possible DUP coalition, due to the DUP stance on women’s rights issues, such as abortion and contraception .

It was reported in the evening standard on the 10th of June, that a deal with the DUP

“could lead to vote on reducing abortion time limits”

This should create a real problem with current legislation regarding tax credits.
Abortion is not a decision taken lightly by most women in this difficult position . How would they cope financially, when austerity is hitting many people with full force.

It makes very difficult decisions even harder , being caught between two different opinions on the ethics of abortion and any limits imposed on support for children does not give us the strong and stable leadership Theresa May claimed to be able to offer us.

The effect of a DUP and conservative coalition will not just affect women , it will be felt by many people both here in Britain and in Northern Ireland .

Sinn Fein have become increasingly angry about the possible union, stating for the Irish Times

“It is a coalition for chaos in the time ahead. We don’t believe that any deal between the DUP here and the English Tories will be good for the people here. Any deal that undercuts in any way the process here of the Good Friday and other agreements is one that has to be opposed by progressives.”

The Good Friday Agreement was a monumental political achievement in establishing peace in Northern Ireland during the 1990’s, bringing an end to years of sectarian conflict, known as ‘The Troubles’.

Northern Ireland’s present structure in government is based on the Agreement which allowed the creation of a power-sharing assembly to govern by cross-community consent. This deal was then amended by the St Andrews agreement in 2006, which proved to be easier to implement.

After decades of peace, it would seem many have forgotten the chaos and violence caused by unrest and conflict in Northern Ireland, and with Theresa May’s record, many are distrustful that she will put the people ahead of the conservative party and be an honest broker in negotiations with the DUP. With the government’s ever increasing lack of traction and waning public support due to their political ideology of unsympathetic cuts and distrust regarding a fair deal in a possible alliance, the DUP stand to have more to gain from negotiations, and the conservatives more to lose.
If Theresa May is on the backfoot ? how much will she sacrifice to save the conservative government from collapse and keep her position of power?

Hopefully she will be encouraged to put the people in the forefront of any negotiations and decisions that need to be made.