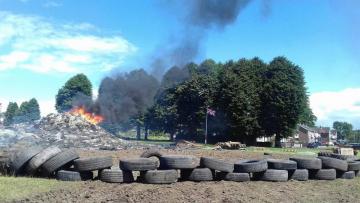 As Acrid smoke still blackens the sky in Northern Ireland on the twelfth, many will be questioning what this celebration of ‘culture’ is about?

The 11th July is a yearly Protestant/unionist tradition where bonfires are lit and street parties ensue before The Twelfth or Orangemen’s Day. Sinn Fein described the celebrations as ‘An annual display of hate”.

A celebration which began in the 1800’s for the battle of Boyne (1690), which saw Protestant King William III land in County Antrim, Northern Ireland in 1688 to victoriously fight Catholic forces against the exiled King James II who was trying to regain the throne of England but fled when William of Orange subdued his army with a much larger force in Ireland.

The battle has significance to the Protestant/Unionists because the Protestants of Ireland, had been given more rights under Cromwell, whilst Catholics had been weakened by Cromwell’s rule, having land confiscated and their rights removed.
Protestants of Ireland saw the Catholic King of England reclaiming the throne as a threat to their somewhat newly claimed advantages in Ireland and worried that a Catholic King of England would mean that Protestants would be massacred or driven from the country.

The whole thing stinks of hypocrisy, Unionists celebrate by bedecking streets with British Flags and bunting.
Unionists wish for Northern Ireland to remain part of Great Britain, but they celebrate yearly a battle which saw a Dutch King defeat an English monarch and do not want English laws, which do not conform to their extreme religious ideologies.

The bonfires themselves are decked with the national Irish Flag or effigies of Sinn Fein members, posters and this year one bonfire was decked with racist remarks about a black footballer.
Palestinian flags are often found on the bonfires as unionists are aware of the similarities of the Palestinian plight to that of the situation in Northern Ireland.

The Bonfires which light up the skies of Northern Ireland can be up to 100ft high and are built of illegal burning materials such as tyres, which pollute the air and cause toxic smoke which is harmful not only to the environment but for anyone breathing in and can cause serious health issues.

Orangemen’s day has been notorious for acts of violence since its beginning which ferocity grew during the thirty years of The Troubles.
One of these acts of violence sees the 19th anniversary of three young brothers burnt to death in their home after an Ulster Volunteer force member had set it alight with a petrol bomb. http://news.bbc.co.uk/…/…/july/12/newsid_2500000/2500503.stm

The celebrations this year grew more irresponsible than previous years since the troubles with bonfires being built too close to properties and reports of windows cracking from the heat and windowsills melting.
Firefighters tackled 40 bonfires, up by 21% from the previous year, at the worst points of the evening there was a call made to 999 every minute.

This is somewhat the cause of the problems we are seeing with Stormont. Stormont currently does not have an executive due to a disagreement between Martin McGuiness and Arlene Foster. Without an executive, decisions on running Northern Ireland cannot be made and if an agreement between the two parties cannot be reached in due course it could see Westminster taking control of Northern Ireland. http://www.bbc.co.uk/news/uk-northern-ireland-38612860

Thankfully this year The Orange Marches went by without violence but it is a wonder after the hate crimes of the eleventh.

One of the most illogical aspects of these bonfires is the burning of the national flag of Ireland. A flag which colours represent the very things the Protestants/unionists should be aspiring to.

The Green = Irish Republicans, the white = peace, and the Orange = Protestants/unionists.

Note from the editors –  https://www.unitymarch.org.uk/article/open-letter-all-supporters-and-rea…