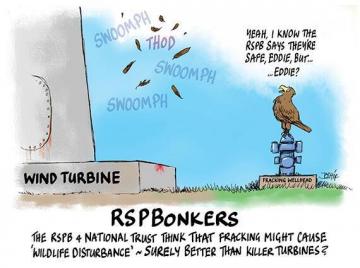 The single biggest evil threatening the environment in the UK right now is the Fracking Industry.

The current Tory Government have made no secret of their support of the process of high powered hydraulic fracking. This is partly due to the fact that many Tory MP’s have interests in energy companies and as such their opinions and views are tainted and at worst biased. All the other major political parties have stated their opposition to fracking, the Green Party and the Labour Party have categorically stated they will ban it.

The process hydraulic fracking involves drilling vertically for approximately 6,000 to 8,000 feet then horizontally for half a mile before fracturing the rocks with massive quantities of extremely high pressurised water sand and chemicals to release the gas contained in the layers of shale rock.

The majority of licences issued so far by the government are to Cuadrilla, GDF Suez, Hutton Energy, UK Oil and Gas, and Aurora Energy Resources, the biggest winner was Ineos, the Anglo-Swiss chemicals group, with 21 licences. The majority of these companies are based in the North of England and the East Midlands which is known as the Bowland Hodder Shale Study Area.

The area identified as being of interest to the energy companies is predominantly the old coalfields of Nottinghamshire, Derbyshire, South Yorkshire & Lancashire. The risks of drilling in old coalfields with vast pockets of methane gas is of potentially catastrophic proportions. Although the old pit heads are mapped and charted, the location of the old roadways and coalfaces of many of the older pits which closed many years ago are unknown. To drill through these old mines is fraught with immense danger and the risk of explosion is highly probable.

There have been several examples of the dangers of methane gas in old mining areas; Methane gas was discovered in 1980 in properties in Barnsley, resulting in properties having to be evacuated and boarded up, the same thing has happened in Rotherham where council houses have had to be permanently boarded as they were unsafe for people to live in.in 1988 in Sutton Scarsdale Derbyshire the house of a retired British Coal Manager; Don Gent was destroyed after an explosion following a build up of methane gas in the cupboard under the stairs was ignited by the central heating timer switching on. He was fortunate to escape from the explosion but his house was destroyed by the explosion and subsequent fire.The following year in Arkwright an old mining community on the outskirts of Chesterfield methane was found to be seeping from the recently closed colliery into the houses of the village. After an investigation by British Coal and the local council they came to the conclusion that too many homes were at risk of explosion and the whole village was rebuilt on land to the north of village which was deemed to be safe. the entire old village including the school, chapel, pub, shops, club and 200 terraced miners cottages were completely demolished.

In 2011 there were two earthquakes just outside Blackpool caused by the drilling at Preese Hall drilling site, which was operated by Cuadrilla. A report by the British Geological Survey (BGS), stated; “Most likely, the repeated seismicity was induced by direct injection of fluid into the fault zone.”
The first quake on April 1st measured 2.3 on the Richter scale, the second quake on May 27th was of a magnitude of 1.5. The quakes were not caused by the violent rupturing of the rocks as you might expect, but by the presence of water. The rocks are lubricated by the water as it pushes them apart, allowing them to slip past each other. “It’s a bit like oiling the fault” said Brian Baptise of the BGS.

The use of carcinogenic chemicals in the drilling process is yet another hazard to human health and the environment. Chemicals such as; arsenic, benzene, cadmium, lead, formaldehyde, chlorine, and mercury are used in the process. These chemicals are known to have the highest probability of health impact, and most likely be the cause of reproductive and developmental problems. The process of fracking itself also has the potential to cause air pollution, increase greenhouse emissions and to contaminate drinking water supplies with toxic chemicals and heavy metals. The wastewater produced in the fracking process will be so toxic and water treatment plants in the UK do not have the capability to treat or clean this waste. Consequently the only way that it can be disposed off is by transporting it away from the fracking sites in large tankers to specialised waste disposal sites around the country.

Ineos who currently have 21 licences to carry out exploratory fracking tests have stated that they intend to dump waste water from the fracking process at sea once it has been treated. The problem with this statement from Ineos is that the waste water containing radioactive and chemical waste cannot be treated at any plant in the UK as they do not have the capability to do so.

The effects on human health due to pollutants emitted into the atmosphere during the flaring at drilling wells has yet to be quantified, but research so far which is limited due to the shortage of data available from an as yet unproven industry suggests that there will be an increase in respiratory diseases and conditions due to the toxic irritants contained in the Silica sand which is used in the process along with water and chemicals which are pumped at extremely high pressure into the shale rock in the fracturing process.It can impede breathing and cause respiratory irritation, coughing, airway obstruction and poor lung function.

Ineos who have licences in the East Midlands and Yorkshire area to carry out exploratory drilling (which is a pre-cursor to fracking) have recently lied to landowners in Harthill South Yorkshire by telling them that the seismic testing they wished to carry out was for the HS2 project to gain access to their land. Since they have started seismic testing in Harthill the skylark population has disappeared due to the disturbance because Ineos failed to carry out an ecological survey prior to seismic testing. The skylark is protected under the 1981 Countryside and Wildlife Act which makes it an offence to kill, injure or take an adult skylark, or to take, damage or destroy an active nest or its contents.
Read more at https://www.rspb.org.uk/…/bi…/bird-a-z/s/skylark/legal.aspx….

The fracking companies are unscrupulous and not averse to the use of heavy handed tactics when dealing with landowners by lying to them to gain access or when reacting to protestors at sites that supply the fracking industry or where exploratory drilling is taking place. Two such examples are Preston New Road, Preston and PR Marriotts at Danesmoor Clay Cross. At both sites protestors have been assaulted by security and Police. The level of force against protestors who offer no resistance or violence has to be seen to be believed, security forces using pressure points such as the carotid artery in the neck to subdue individuals whilst Police Officers look on and fail to intervene (Preston New Road) and Police Sgt throwing a female protestor across the road (PR Marriotts Danesmoor) with no regard to her welfare or safety.

The protestors at all the protection sites are all there on behalf of the wider community and putting their liberty and lives at risk for the benefit of others and our children and our childrens children. They are protesting on our behalf to protect the environment and our water supplies despite the governments use of the Police as a private army to enforce their unprincipled policies of the use of fossil fuels as opposed to pursuing renewable energy schemes such as; hydro-power, solar power and wind power. they are not the great unwashed as the mainstream media (MSM) would wish to portray them but very brave people who have given up their careers to protect the environment and their fellow human beings.

The Police are supposed to facilitate peaceful protest, but it would appear that they are siding with the fracking companies to assist them in their business by arresting protestors on trumped up charges such as aggravated trespass usually on the words of one individual working for a fracking company with no evidence to back up such an assertion. A case in point being on the evening of 15th July at Old Pit Lane Danesmoor when 10 protestors were arrested on the alleged offence of aggravated trespass on the say so of one person working for the drilling company who alleged his van had been touched, when he in fact had driven into them whilst the protestors were legally participating in a slow walk. The Police Superintendent (Bronze Commander) refused to engage in any dialogue with other protestors when they asked why their colleagues had been arrested and what offences had been committed and what powers they had been arrested for.

So instead of pursuing ethical means of energy production such as renewable energy; i.e. Hydro-Power, Solar Power and Wind Power the current Tory government is intent on extracting the remaining fossil fuel deposits in order to line the pockets of those in the energy industry and those MP’s who have shares and directorships in the energy companies involved in the fracking industry. The government are once again using the Police as they did at Orgreave as their own private army of shock troops to intimidate and unlawfully arrest peaceful protestors at various locations around the country, most notably Danesmoor in Derbyshire and Preson New Road in Lancashire.

History is repeating itself, only this time it is not being reported in the MSM and instead of the miners being the target of the Police it is peaceful protestors who throughout their protest have maintained a dignified vigil in the face of appalling violence from private security thugs and the Police who using heavy handed tactics and arresting protestors for spurious offences and quoting incorrect powers.

Until the public are made aware of these abuses of power by the Police and their acquiescence of the fracking companies intimidatory business practices then this industry will be allowed to continue to harm the environment, pollute our drinking water, contribute to further global warming and potentially store up a time bomb of all sorts of diseases and life threatening conditions for the population of this country and our children and our childrens children.

Now is the time to unite, fight back and resist this evil toxic industry before it is too late. Once Fracking is under way there will be no going back and this country will become an ecological time bomb. Most civilised countries in Europe have already banned fracking or placed a moratorium on fracking, it is time the UK did the same.

Note from the editors –  https://www.unitymarch.org.uk/article/open-letter-all-supporters-and-rea…