Corbyn Vs May Round Fourteen

The Leader of the Opposition kicked off PMQ’s by challenging The Prime Ministers “national Crisis” He went on… “She refused Parliament the right to vote on her Brexit Deal, she did that to seek further assurances, she failed, she now says she is seeking further assurances, while all the time running down the clock on the alternatives. So can the Prime Minister explain to us when the European Council will meet to approve the changes they have already ruled out?”

Theresa May said she is still working with the EU, she went on to say “Can I just correct the Right Honorable Gentleman” She then proceeded to advise that she has stated when the meaningful vote will take place. The Prime Minister then continued to point the finger at Jeremy Corbyn for standing opposite and saying what he is against but not saying what he is for and said that if he wants to support the referendum and avoid no deal then he needs to vote for this deal (the one she denied Parliament voting on). She finished with an insulting quip “He can talk all he likes about a meaningful vote, all he gives us is a meaningless position.”

Jeremy Corbyn retaliated that the vote should have been taken a week ago. He followed up his first question by asking how will she achieve legally binding assurances prior to the return of Parliament on the 7th of January?

Theresa May didn’t answer his question and then accused Jeremy Corbyn of not having a Brexit plan, she said: “The Right Honourable Gentleman has to accept his responsibility on delivering on Brexit.” 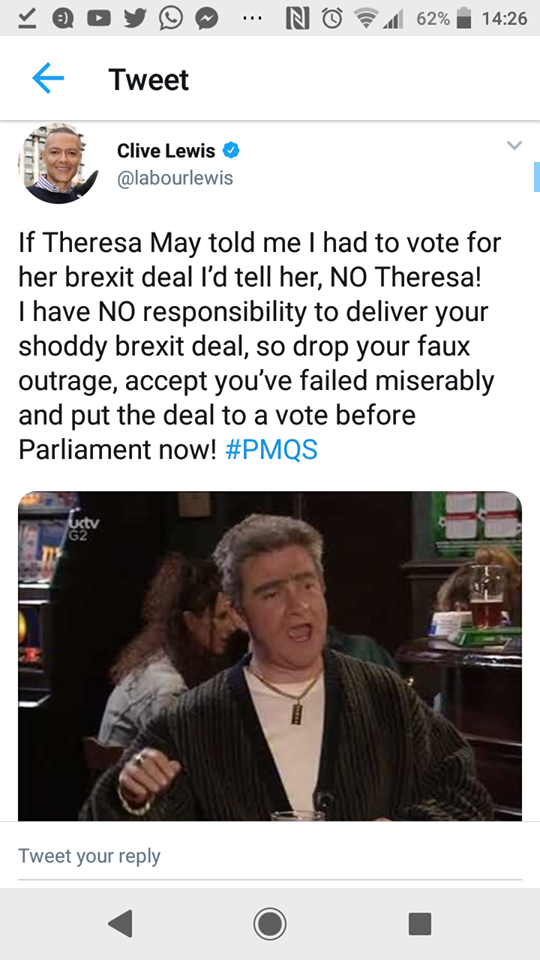 Mr. Corbyn went on to state that the Prime Minister was stalling for time and that there was still no majority support in the house for her “shoddy deal”.  He tackled the subject of her failed renegotiations and asked the PM “So can the Prime Minister give us a cast iron guarantee the vote in the house will not be delayed again?”

Theresa May stood and responded saying we have been very clear (On the morning her meaningful vote was to take place there were assurances that it would take place and then it was pulled at the last minute). She jumped on the attacking horse again accusing Jeremy Corbyn of bottling it if he doesn’t recognise his responsibility to deliver on Brexit. 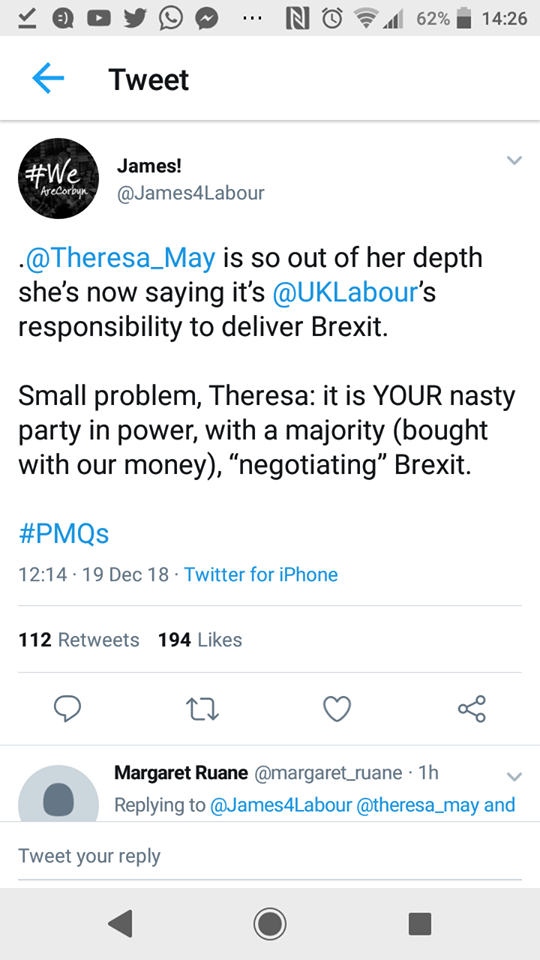 Mr. Corbyn stood and highlighted that the Prime Minister didn’t answer his question (By not answering she doesn’t allow for confidence in the house that she will put her deal to Parliament in January).

Jeremy Corbyn expressed his anger when he once again stated the obvious “She is the one that has denied Parliament the right to vote on this subject. So please no lectures to Parliament when it is the Prime Minister for denying MPs the possibility a vote on this, we should have had a vote a week ago, we should be now debating practical alternatives, she is behaving in a disgraceful way which is frankly an outrage.”

He then went on to challenge the Prime Minister on no deal and asked why she was wasting money preparing for a no deal when any responsible Government would not consider a No Deal Brexit.

It appears she is threatening Parliament with the prospect of a no deal so that MPs will be backed in a corner to vote for her bad deal as she runs down the clock there will be no time to debate alternative actions.

Jeremy Corbyn picked up on this straight away stating that the PM was recklessly running down the clock. “All in a shameful attempt to make her own bad deal look like the lesser of two evils”.

He asked how she could waste that money when police funding had been reduced with 20,000 fewer police and 100,000 NHS vacancies with the worst November on record.

Mrs. May responded that there had to be money for contingency and once again repeated that he had to vote for her deal. She then stated that extra funding had been put forward for the police this year but Labour voted it down.

This is extremely misleading from a what appears to be a compulsive lying PM. Back in March, she was rebuked for misleading MPs and the public for continuously claiming that there was an extra £450 million in funding for local police forces. However, the chair of the UK Statistics Authority, Sir David Norgrove, rules that claim made by May was misleading.

In the 2018 Autumn Budget, Phillip Hammond was accused of prioritising potholes over crime as he announced £160m for counterterrorism but gave no extra money towards other police areas despite rocketing crime rates.

This Government holds the police in contempt as it raises more money for potholes then police services, there are 44,000 fewer officers and staff in the police force since the Conservatives came to power in 2010.

The Leader of the Opposition asked when would Theresa May stop dithering and said that her current no deal preparations were a cynical move from a failing and reckless PM.

Theresa May responded by auditioning for the pantomime with a performance that might earn her the role of the dame but certainly did not impress the opposition benches especially as she ended her tirade by telling Jeremy to look behind him and stated that his backbenchers were not impressed with him.

This coming from the woman that has just survived a vote of no confidence in her from her own members just last week. 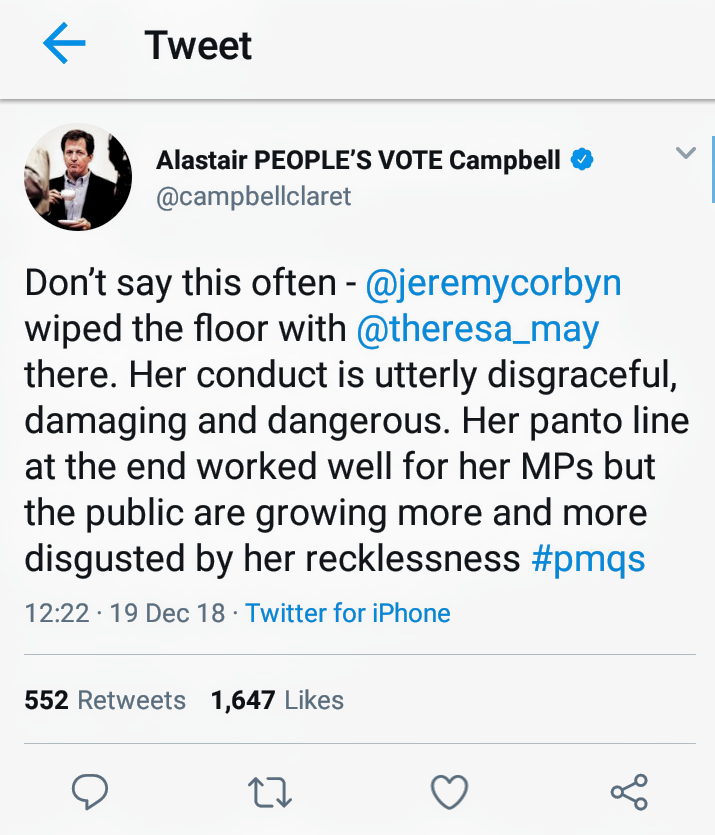 Another week where Jeremy Corbyn looked strong and pressured Theresa May on the subjects that matter. Theresa May avoided answering questions as she always does and resorted to quips, insults, attacks and lies. Yet despite Mr. Corbyn’s attempts of honest and direct politics, social media are more concerned that it looks like Corbyn said the words “stupid woman” at the end of PMQ’s. Perhaps he did or did not, but if that is all that people focus on instead of the absolute calamity we seem to be faced with because of the actions of this stupid woman then there is something grossly wrong with our society. 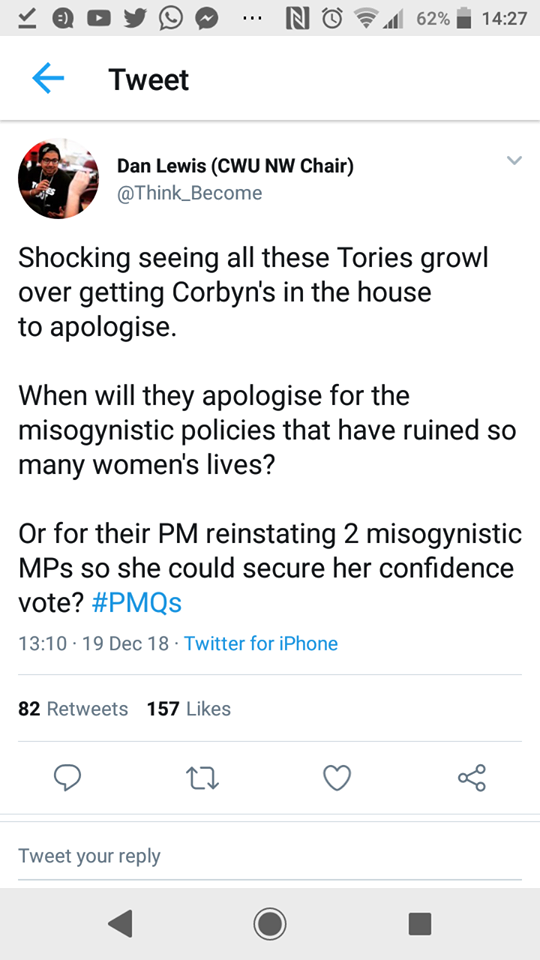 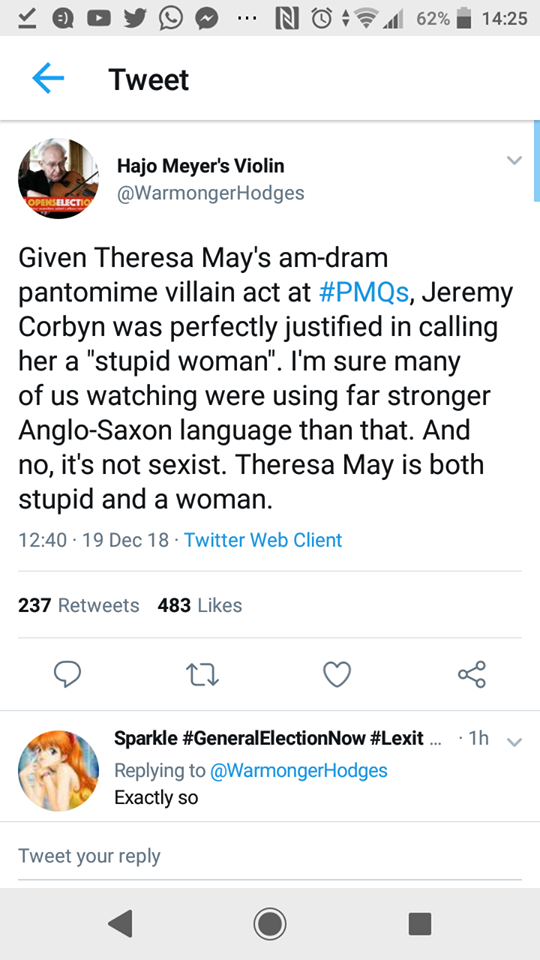 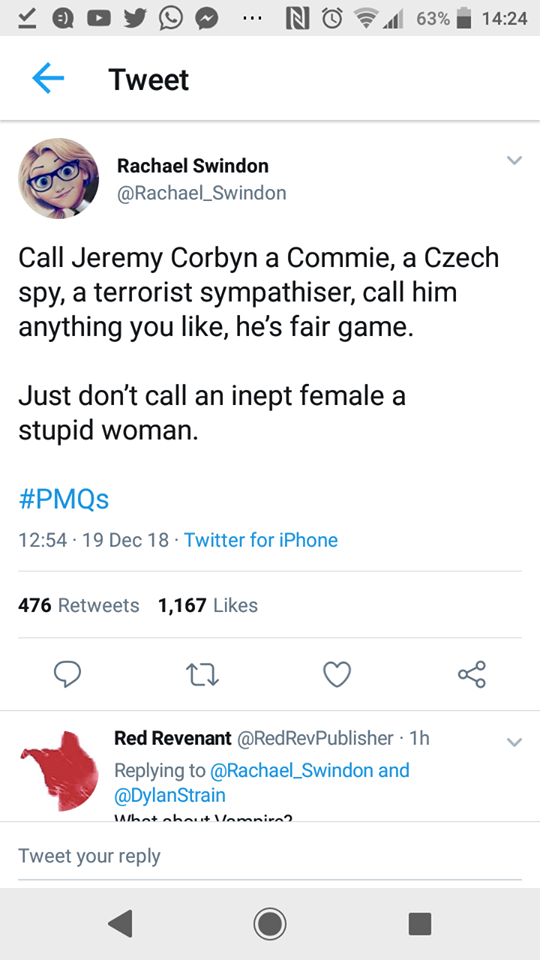