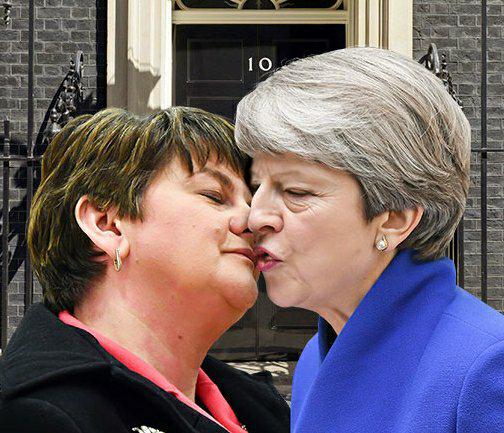 When Dr King Shultz and Django Freeman sauntered into Candyland, it was with a devious plan to hoodwink Monsieur Calvin Candie with a glittering, too-good-to-be-true offer for the worthless Eskimo Joe in order to steal away their real objective of Broomhilda. And even though their cunning plot was unmasked and a bloodbath ensued, Django eventually prevailed and was able to seize back his prized Broomhilda.
Yesterday we saw a desperate Prime Minister attempt to lever a Brexit deal for the UK, having believed she had distracted the DUP sufficiently with the £1BN bung. And it was so close to being completed until the DUP’s Arlene Foster spoke to the world’s media from Stormont, clearly shaken. Clearly furious.
And with the speed of a Formula 1 champion, the momentum of the phase 1 deal came to an almost instant stop. The Duppers had bared their teeth; Snarlene had been spooked. Under no circumstance would the DUP accept any divergence from the rest of the UK.
Except they do when it suits them.
In Northern Ireland there are many differences from the rest of the UK. Like Scotland, the legal system is different to England and Wales. In terms of currency, NI issues their own bank notes, and not Bank of England notes used in England and Wales. And that’s before we talk about marriage equality, women’s right to chose and a myriad of nuances that mark NI as different from Britain.
Yet the £1BN confidence and supply deal had the DUP cock-a-hoop. They have relentlessly crowed to all who would listen that they have delivered for the people of Northern Ireland.
Yet that is wearing a bit thin in the province. Like the fake offer made at Candyland, we have yet to see the colour of this money. It has become akin to the emperor’s new clothes. The DUP seek constant appreciation for it, but invisible to everyone. Almost incredulously, the DUP’s Nigel Dodd’s was named “Negotiator of the Year”. The Tories must be sniggering up their sleeves at that one. 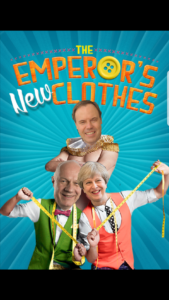 But delivering for the people with an invisible promise sits cheek by jowl with their current incomprehensible stance. Almost independently, the DUP insist they do not want a hard border on the island of Ireland, yet they insist that the North must leave the EU on the same terms as the rest of the UK.
However, is that true? As things stands it is impossible to have both. The leaks from Brussels indicated that alignment for NI with the rest of Ireland was essentially requiring the North to remain in the customs union. The DUP have also insisted, consistently, that Brexit means no customs union, no single market membership. They find it unpalatable to remain in these structures with no representation in the European Parliament to influence them.
It’s time to call the DUP stance for what it is. No matter what they insist publicly, the restoration of a hard border on the island of Ireland post Brexit reinforces, in their minds, the Union with Britain. The invisible border and seamless crossings gave the impression of one country on one island. They protest that they are only working in the best interests of the people they represent, knowing the damage that a hard border will have on rural communities, on farming and agriculture. On the fishing industries. On the small business owner. And consistently dismiss that Northern Ireland, their territory voted against Brexit. And still they refuse to represent their peoples’ interests.
They continue to operate on the only mode they have. Sectarian protectionism above all else.
There is a very short window for Theresa May now to move the Brexit negotiations to phase 2. We all wait to see if the DUP threat to bring her down will supersede the Prime Minister’s primary responsibility to deliver for ALL of the nation.
The whole sorry tale in Brussels yesterday was nothing more than a DUP Debacle – and the D is not ,  most definitely not , silent.