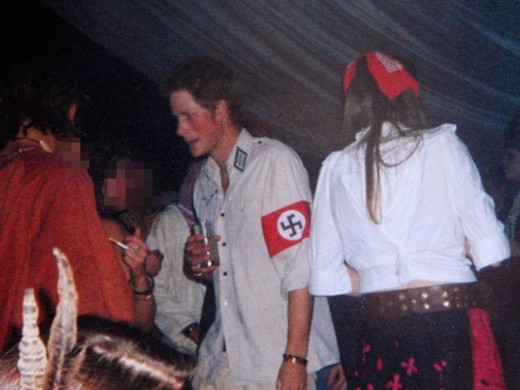 After what can only be considered intense bullying from the mainstream media towards Christine Shawcroft, she has taken the difficult decision to quit her post on the NEC after resigning from her role as Chair of the Disputes Panel.

“It is clear that my continued membership of the NEC has become a distraction for the Party and an excuse for endless intrusive media harassment of myself, my family and friends.”

Christine Shawcroft started her career as a teacher before becoming a Labour councilor in 1985. However, she was discriminated against for her left-wing views and was refused permission to defend her council seat in 1998 after she was vetted by a selection panel.

It is very unlikely Shawcroft is an anti-Semite, though she has made an error of judgment in an unforgiving environment. Whilst it is pointless raking over the past to try to change the situation, it is easy to see how Christine could make such an error when you consider her past, her empathy for others and her own experiences of discrimination which may have led her to be defensive of those she feels are being treated unfairly.

Christine is a socialist, which means she will fight injustice when she sees it 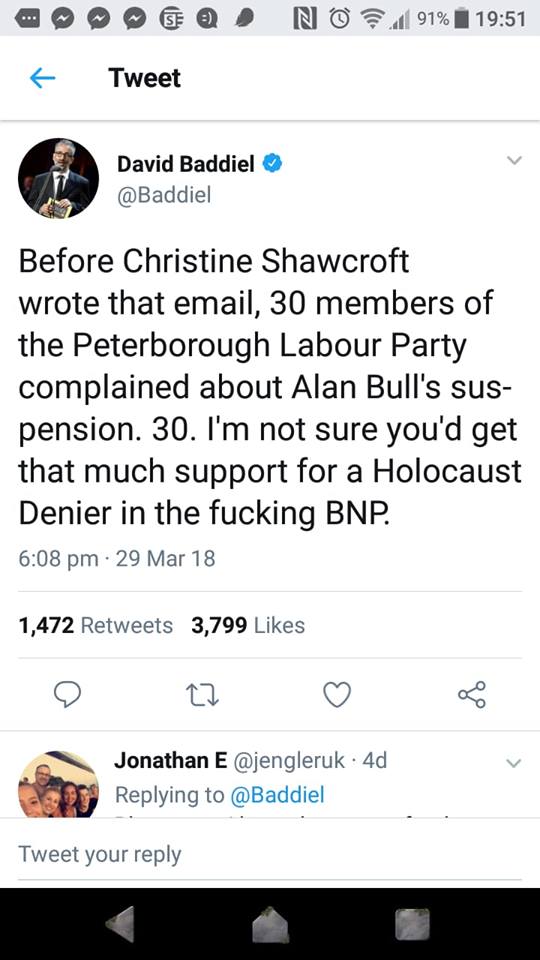 and this is not the first time she has made an error in defense of someone without being aware of the full information at hand. However, a full investigation of the accusations against her was never made. Instead, the media have dictated Labour’s disciplinary procedures and through a fear of the backlash of an already febrile situation surrounding anti-Semitism within the party, Jeremy Corbyn has had to ask Shawcroft to resign her post as the Chair of the Disputes Panel.

Due to her resignation from the NEC, Eddie Izzard takes her place as the next nearest candidate in the recent NEC elections.

It has also come to light that Labour’s Rossendale Councilor, Pam Bromley has been 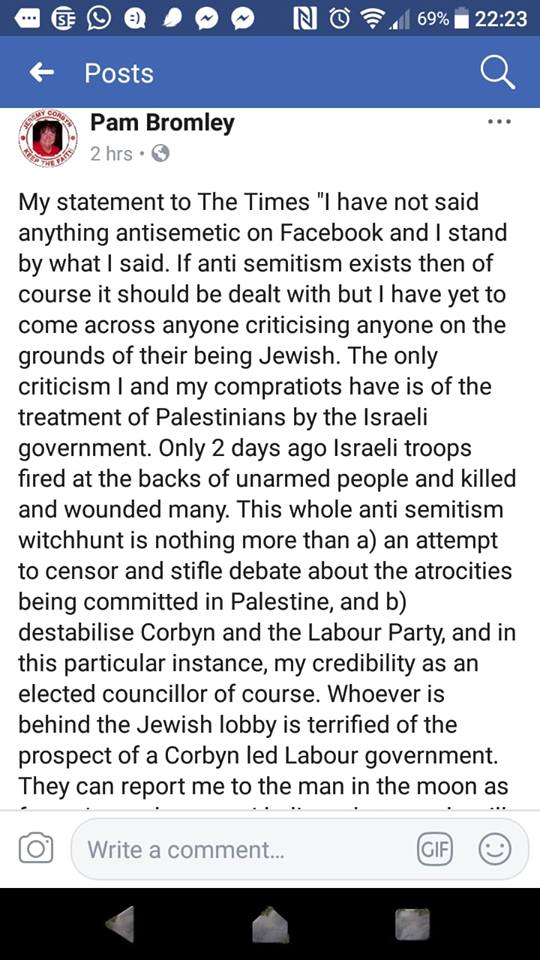 accused by The Times and Buzzfeed of Anti-semitism and faces unwarranted slander by the National Press. This is due to a complaint made against her by Campaign Against Anti-Semitism.

Only two days ago 773 Palestinian protesters were shot at with live ammunition and 17 died of their wounds. Israel has ruled out an inquiry into their military actions against unarmed protesters. With just this instance in mind, and there are many other instances, which can be evidenced, it is easy to question and criticise Israel.

Pam’s supposed anti-semitic crime is due to a status she wrote regarding the Rothschild family. There is nothing to suggest that she has ever personally expressed hatred towards Jews.

The same could be said of Alan Bull, the gentleman for whom all the trouble with Christine Shawcroft begun. Alan Bull has been accused of anti-semitism and has been suspended from the Labour party due to an anti-semitic post he shared on Facebook. However, despite this post being considered dreadfully inappropriate.

Holocaust denial is something that no one should share or debate, it happened and it was one of the worst events in modern history.

Alan Bull has since given an apology for making such a misguided error.

Despite the poor choice of judgment in this case by Alan, he has never incited hatred toward the Jewish People but does criticise Israel for the treatment of the Palestinians.

He states that he is being condemned for sharing posts with friends that were shared with him for debating purposes and assumed it was in a private atmosphere, not a public forum. He writes

“The habit I adopted then, as now, is as follows: (FB) friends send me posts they think may be of interest. I repost mostly without comment to discover what other friends have to say. Often when an (FB) friend comments, I would cut and paste this comment complete with their name above the article before reposting, which stimulated more comments and we all benefited from the diverse opinions we shared.”

He also goes on to write “The most controversial article that I re-posted privately to my (FB) friends, not the public, was in 2015, before I became active in the Labour Party. It was an article with a documentary, with the controversial title, “Red cross confirm holocaust is a hoax”. This article was not reposted with intent to offend anybody and I regret that others have made this public, thus giving it coverage I do not think it deserves. I re-posted it to (FB) friends only, without comment, with the sole purpose of gaining insight from more knowledgeable FB friends, hoping they would confirm my suspicion that it was not genuine. I have not re-posted it since I received guidance that this article had been widely discredited, and would not post anything like it again. In hindsight, I fully accept that I was naive to assume that our right to free speech could, or should, include such a controversial and unacceptable article, even if only to a closed group, and I will not do so again.”

However, Alan also states that within the comments which were omitted from the screenshots someone asked him if he was a holocaust denier and Alan replied: “Not at all, just posting for discussion and debate, as usual, best wishes, Alan”.

Christine Shawcroft has lost her well-earned positions within the Labour party because she failed to trawl through social media and ensure that she was aware of anything inappropriate that Alan Bull had posted. She was aware that he was suspended for anti-semitism as her e-mail states but she declares that she had not seen the post in question. So Christine is guilty by association. 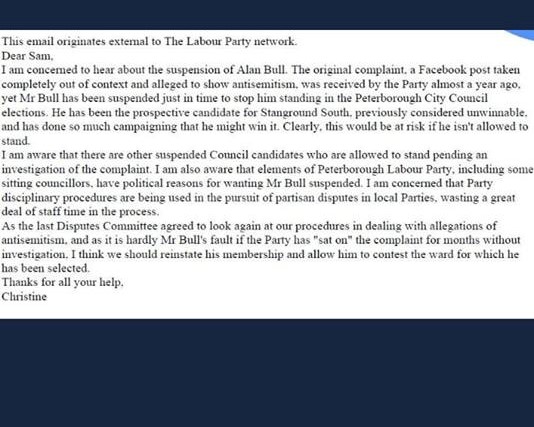 Pam Bromley finds herself the new target for accusations of anti-semitism along with other Labour members coming under attack.

We should be ashamed that we are allowing our corrupt press to keep spinning this story, not in any attempt to help the Jewish Community of the United Kingdom, but purely for political gain.

The press have been allowed to harass and intimidate a woman resulting in her resigning two of her professional positions and shutting down her social media accounts when Tories and even a member of our own Royal family goes unremarked dressing up as a  Nazi . 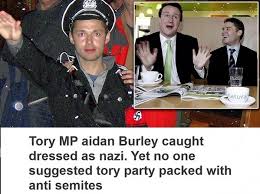 Ask yourselves why is there such a difference in the way the press treats the privileged individuals of our society.

The attacks against Labour continue to mount as the May local elections approach. Corbyn meeting a Czechoslovakian spy, to calling him a Russian stooge during the Salisbury poisoning scandal and now the press is dredging the depths of Facebook for anything they can use to discredit Jeremy Corbyn and his allies.

The Sunday Times is guilty of just that, having trawled through Corbyn-supporting Facebook groups and slandering Corbyn because some individuals made inappropriate comments.

Let’s get some perspective on this.

Firstly, these groups are open to the public with one click you can join the group. Admins of the group can remove inappropriate posts/comments when they see them but with hundreds of comments, not all will be spotted.

Secondly, you cannot be guilty by association. It is absurd to state that because someone writes something you object to in a post you created with a long thread that you are tainted by their opinions. You can only be held responsible for what you personally write.

That is not to say that anti-Semitism isn’t an important issue, which unfortunately is still a threat to Jewish members of society. Labour must and do deal with any cases of racism, anti-Semitism, sexism etc.

The Mirror reported that Labour had a backlog of Seventy-four cases of anti-Semitism but with a surging membership of over 550,000 this is a small number and certainly fewer than the Conservative party whose Foreign Secretary, Boris Johnson is a serial offender when it comes down to racism, sexism and general inappropriateness. 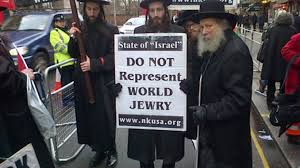 complete the investigations into claims of anti-Semitism within the party.

One point we must make clear is that disapproval of the Israelis treatment of Palestinians and Palestinian land is not the same as anti-Semitism. This is also stated in the agreed international definition of antisemitism, copied below or found here https://antisemitism.uk/definition/

Antisemitism is a certain perception of Jews, which may be expressed as hatred toward Jews. Rhetorical and physical manifestations of antisemitism are directed toward Jewish or non-Jewish individuals and/or their property, toward Jewish community institutions and religious facilities.

Manifestations might include the targeting of the state of Israel, conceived as a Jewish collectivity. However, criticism of Israel similar to that levelled against any other country cannot be regarded as antisemitic. Antisemitism frequently charges Jews with conspiring to harm humanity, and it is often used to blame Jews for “why things go wrong.” It is expressed in speech, writing, visual forms and action, and employs sinister stereotypes and negative character traits.

Contemporary examples of antisemitism in public life, the media, schools, the workplace, and in the religious sphere could, taking into account the overall context, include, but are not limited to:

Holding Jews collectively responsible for actions of the state of Israel.