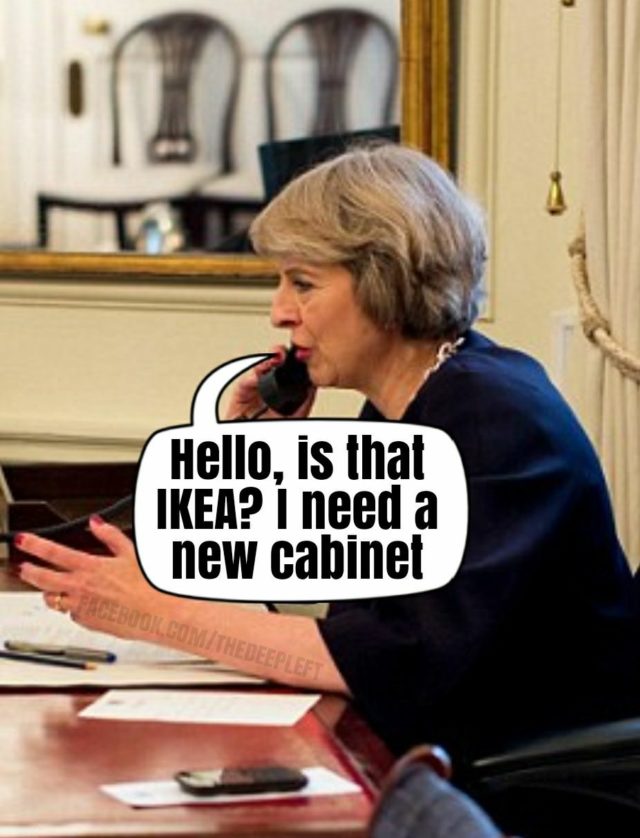 As a cutting retort to the Conservative Party mantra that Theresa May would provide “strong and stable” leadership and government, weak and wobbly was sufficient to dismiss this Tory assertion. It was a slogan to belittle the Tory leader, and dripped with the humour of sarcasm, so much so that the Conservatives were forced to change tact, and try to distance themselves from the burden of the strong and stable tag line that morphed into a millstone around May’s neck.

The General Election result returned May in a position that was anything but strong and stable. In fact, so marooned was she in her own bluster, May went to the Queen to assert that she was, there and then, in a position to form a government.

As it transpired, it took two weeks of negotiation with the socially ultra-conservative DUP, and a £1bn bung, for May to actually manoeuvre herself into anything resembling a position of being able to form a government. She certainly was not strong. And the arrangement not stable.

Since then May has been plagued by weak governance. Her keynote speech to conference was an unmitigated disaster. The Brexit negotiations are beyond pitiful, so much so, that a no deal hard Brexit is now being countenanced as a distinct possibility. This though has highlighted the deep divisions within the Cabinet, with the Chancellor stating he will not yet budget for a No Deal exit from the European Union.

The effect Brexit will have in Northern Ireland, the UK’s sole land border with the European Union, is at best, being allowed to slide. At worst, it is being ignored and risks descending into chaos.

The latest collapse of the Stormont talks, which attempt to get the institutions of devolved government back in place, has been markedly noted for the absence if any input by May. She has steadfastly distanced herself from any involvement, any attempt to get the Northern Ireland Assembly back up and running. Successive British Prime Ministers have, along with their Irish counterparts, made visits to the province in similar situations of crisis. Held meetings and attempted interventions. Put forward new ideas ro resolve impasses.

It begs the question how can this government successfully negotiate a good deal for the country via Brexit negotiations when it is incapable of reinstating devolved government in one of its own regions. In fact, May appears to have little interest in getting devolution reinstated in Northern Ireland.

But perhaps this last week has again put into sharp focus, the abject failure of a government with a placebo leader.

Two cabinet ministers have resigned in one week, and another, Damian Green, is under investigation. However the most damning aspect of these matters is a Prime Minister who is not in a position to sack Michael Fallon or Priti Patel. And that is the crux of the problem at the heart of government.

For May to sack either Patel or Fallon, she would essentially be sounding the starting gun on a leadership contest. With a Cabinet so divided on the Brexit issue, and a leader with no authority, May knows she is not is a position to sack any Cabinet minister, no matter what misdemeanours befall them.

And that is blatantly obvious with the 24 hour buffoonery that surrounds Boris Johnson.  His ill-informed comments about Nazanin Zaghari-Ratcliffe, and her purpose for being in Iran, was soon trumped by his crass and token apology, if his comments had “caused anxiety”.

The damage of his comments is yet to be seen.

The damage he causes by being in the government is painfully evident, yet May is not in a strong enough position to sack him.

So weak and wobbly will just not cut the mustard any longer. The time for a put down with a snigger has long since past. This leadership, this government is not weak and wobbly. It is dysfunctional; it is rudderless; it is a fractured disaster lurching out of control and causing untold damage to the country’s future.

The country needs a government. It’s not funny anymore.