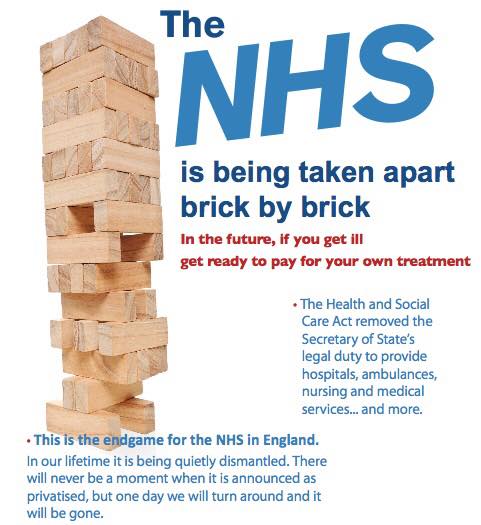 Our NHS is being taken apart brick by brick.

There has been much recent talk of the crisis of underfunding and of the “below the radar” privatisation of #OURNHS.

All true, of course, Jeremy Hunt whatever weasel words he chooses to espouse now, is on the record as wanting an NHS run on a private insurance basis after all. (Really it is letting the foxes guard the chickens.)

And we can all see and feel the pressures on #OURNHS.
The tired doctors and nurses doing more and more hours for less money. The crisis of underfunded social care. The rampant rip-off of outsourcing.

But this week one of our editors has had reason to use #OURNHS on an emergency basis, and do you know what?
Despite all these pressures, these attempts to undermine and destroy it, it is still bloody amazing, it is still truly astounding and it still needs fighting for, to not only prevent its dismantlement but to maintain and extend it.

To put it in context, I presented myself to my local A&E department at 545pm with a badly infected big toe(I am diabetic). Within 18 hours, I had been diagnosed(unfortunately the toe had to go), I had my operation and was back on a ward being fed. The cost? Free, nil, nada. Not one penny passed hands.

A National Health Service free at the point of use for all. The vision and brainchild of a post-war Labour government dedicated to helping the many, a Labour government dedicated to fighting the great injustices of society and to provide health and education to all, a Labour government of REAL austerity. Austerity caused by the ravages of world war, an austerity of economic necessity not of, as now, a political choice. But still we as a nation, and we, as a movement, had that vision, had that foresight and desire for progress for ALL humanity, not just the wealthy, to benefit from the capital of this country.

Now it is time for us to stand tall again. Not in a time of want and need, but in a time of plenty. Time to say that the vision of our forefathers in that post-war Labour government was correct then and it is even more right now in times of plenty.

Time to stand up to the market-driven, mad ideologues of the Tory party and tell them that enough is enough.

We want #OURNHS back. We demand again a National Health Service free at the point of use, free for all. Nothing more, nothing less.