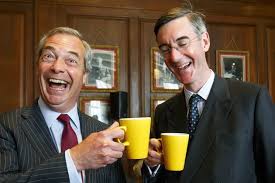 Watching Sunday Politics this morning I was struck by two things that Jacob Rees-Mogg said.

1. That Remain campaigners would not be calling for a second referendum if they had won in 2016. Which is a rather strange statement on two counts…Firstly, it has been widely reported (not) that Farage had said many times that if Leave had lost 52-48, then the case for leaving the EU would continue to made and calls for another referendum would intensify. so, if Leave would not accept the “will of the people” in defeat, then why should Remain not be allowed to call for a meaningful vote on the Terms and Conditions of exiting the EU, when the original referendum was merely an advisory vote on an “intention” to depart with no detail on what that would entail with regards to jobs, trade and our relations with our European neighbours etc.

Secondly, on what would Remain be calling for a second referendum on? A vote to remain would have merely meant that the UK stayed in the EU, there would have been no renegotiation of terms and conditions of our engagement with and continued membership of the EU, so what would people have voted on?

2. When questioned about Tory plans if the House of Lords “blocked” the Brexit bill and would they “flood” the second chamber with 200+ new Tory Lords, he stated that it is already flooded, so you would have to have a deluge on top of a flood.

This is a clear admittance by a leading Tory back-bencher, and indeed, someone who has been repeatedly “talked-up” as a contender for the Tory leadership when May is finally pushed, that the House of |Lords is basically the second chamber with an in-built, longstanding and immovable Tory majority. Is this acceptable in a modern democracy? Can we really pride ourselves on our democratic credentials and abilities and wishes to extend “western” democratic ideas and philosophies around the world with such a clear democratic deficit in our own checks and balances on Parliamentary democracy.

These statements make it apparent that we need to be clear and concise in our approach over the next few months and potentially heading into another election this year.

1. A second referendum must be called on the Terms and Conditions as negotiated with the EU for our exit from the organisation. This is not a call for us to Remain in the EU, although it MAY allow this to happen, if the people have “changed their minds” on this, given new evidence and time to reflect. This is a call for the people, on whom the Leave campaign has long said, should be allowed a voice, and that this process is about bringing democracy back to the UK. What would a second referendum be, if not the ultimate ability of the UK people to express their democratic will and choices?

2. That the second chamber, the House of Lords, as currently constituted must go. If a leading Tory can openly admit that it is a rigged chamber, with a “deluge” of Tories holding an inherent majority, it is time to abolish it. This constitutes a clear deficit in our democratic contract and philosophy. this is the real #ToryElectionFraud they win whatever YOU vote for because the system is rigged. If we can’t change the system perhaps it is time to demolish the system and rebuild a new one, for the many, not the few.