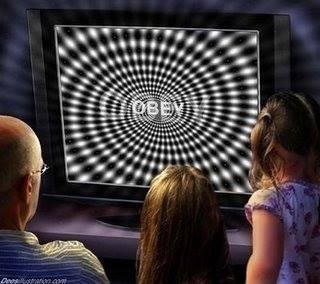 Television and media control our perception of reality, but can we trust them?

To paraphrase a famous quote, ‘If the masses will be free from chains of iron, it must instead reside within an imperceptible confine of carefully constructed knowledge and propaganda, toiling in mentally conditioned plantations’. Today this takes many forms, whether it be our beloved mobile phones, by our side from dawn till dusk. Or our television screens, glued to them as we are in a cyclical and inescapable trance. We are, as Gore Vidal once said “like people born in a cage and unable to visualize any world beyond our familiar bars…. That opinion the few create in order to control the many has seen to it that we are kept in permanent ignorance of our actual estate”, and yes, we may defend some of the facets of our state, but have you heard of Stockholm syndrome?

It isn’t hard either to see just how the establishment are able to control and manipulate our behavior and perception of reality on a daily basis. The Broadcasters’ Audience Research Board showed in 2010 that the average levels of tv consumption in the UK was more than 30 hours a week, or over four hours a day. And Britain has one of the most concentrated media environments in the world, with 3 companies in control of 71% of national newspaper circulation and 5 companies in command of 81% of local newspaper titles. Now, if the Iraq war taught us anything, it’s that these corporations are perfectly happy to lie and sacrifice the lives of the innocent to propagate and further their own agenda’s or ideology, so why on earth, should we trust them to dictate our subconscious thoughts through a relentless barrage of advertising and politically loaded content.

We shouldn’t. We should not allow or indeed encourage our children to base their understanding of the world from what they perceive through the magic box. We must be careful not to live our lives through the fabricated and obsolete lens of social media and ‘reality’ tv. If we are to break free from this matrix of counterfeit reality, then we must again learn to think for ourselves. We must be conscious and critical in all we observe and acknowledge that we can and are being affected by the steady stream of nonchalant propaganda that fills our virtual world.

In short, “The mainstream media creates a false reality, a “pseudo-environment.” People are born and raised inside mass media created illusions. They become isolated and detached from wider reality”.

Now, of course, there will be those that say we cannot take away the media’s empire, they’re too powerful, too clever and articulate. And, to be totally honest that may be true. However, whilst we may not be able to win the game of monopoly. We can stop playing, and acknowledge that it is, just a game. After all, if we band together, we can play any game we like.

Formal Complaint Against Sir Starmer Made By Labour Members