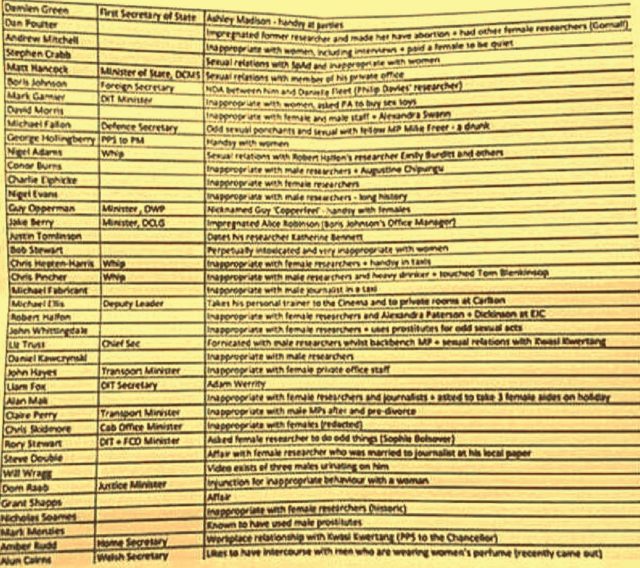 A government that relies on blackmail to keep its perverts in line is one that is morally bankrupt and has no place in a civilised society.

The latest revelations about the perverted behaviour of up to 40 Tory MP’s illustrates their sheer arrogance and belief that they can behave in such an inappropriate manner without any form of censure.

The leaked list of State Secretary’s, Ministers, Whips, the Prime Ministers PPS and back bench MP’s makes for interesting reading. The six most senior members of Theresa Mays cabinet include Michael Fallon, Boris Johnson, Amber Rudd and Damien Green who hold four of the most powerful posts in politics after the position of Prime Minister. 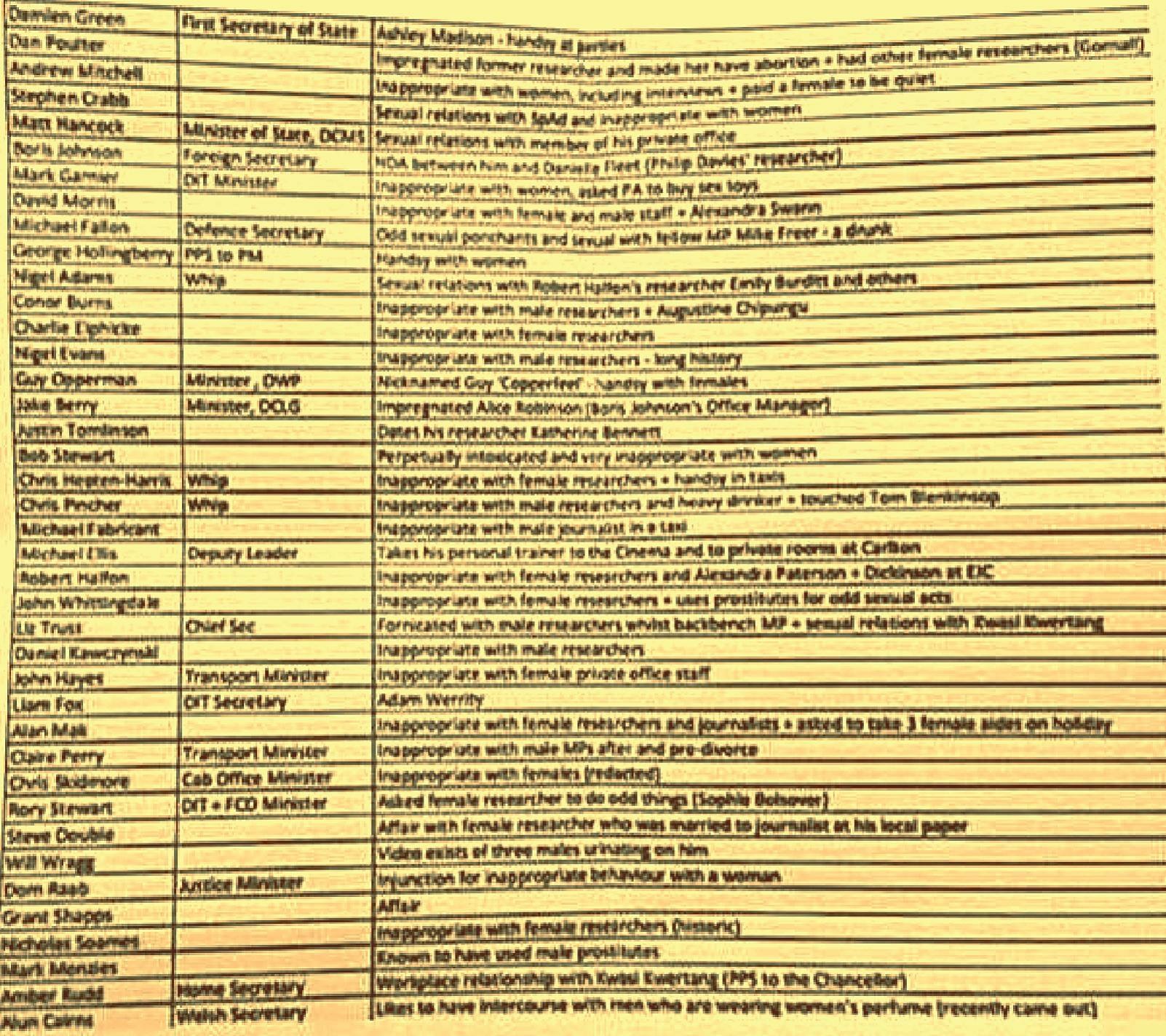 They believe themselves to be the elite of society and move in what they consider to be exalted circles, but let us be clear. They are nothing but perverted sleazy sexual opportunists who in the main, prey on vulnerable researchers who are not in a position to complain about their behaviour. In a normal area of employment if somebody is a victim of inappropriate behaviour sexual or otherwise there are mechanisms in place to complain about the transgressor. If your boss is the transgressor who do you complain to?

Theresa May currently presides over a government that is in total disarray and chaos with its whips having to resort to blackmail over their more perverted individuals to ensure they toe the party line when it comes to the voting lobbies; i.e. “you vote to destroy the NHS or whatever issue is up for debate or your wife/partner will find out what a disgusting little pervert you really are”.

This has been confirmed most recently by Kate Perrior, Theresa May’s former Communications Director who told BBC Breakfast;

“The information is held by the whips, because they use it to make sure that MPs know that other people within the party know exactly what they’ve been up to, and that behaviour either is not acceptable, or it will be used against them – you will vote in a certain way or we will tell your wife exactly what you’ve been up to.”

“Anyone with any sense who was in trouble would come to the whips and tell them the truth, and say now, “I’m in a jam, can you help?” It might be debt, it might be a scandal involving small boys, or any kind of scandal which a member seemed likely to be mixed up in, they’d come and ask if we could help. And if we could, we did. We would do everything we can because we would store up brownie points. That sounds a pretty nasty reason but one of the reasons is, if we can get a chap out of trouble, he’ll do as we ask forever more.”

So nothing has changed over the years the Tory party has been populated with perverted individuals over the decades, but they have been allowed to fester like some boil on the back of your neck because the establishment always closes ranks and protects the perpetrators and smears the victims.

Michael Fallon has been identified as repeatedly touching the knee of journalist Julia Hartley-Brewer at a Conservative Party Conference dinner in 2002. Ms Hartley-Brewer did not make a formal complaint, but told Fallon that if he did it again she would “punch him in the face”. According to Hartley-Brewer he withdrew his hand and that was the end of the matter.

However Fallon does not appear to have changed his spots.
In 2013 when he was at a drinks party he was visibly drunk and had to be forcibly separated from an attractive young female by a government minder. The attractive female was in fact a Russian spy employed by a Russian energy company as part of a honey trap.

Prior to that in 2010 he was again at a drinks party when he had over imbibed and accosted author Bryony Gordon calling her a “slut”.

The hypocrisy of the Tory government knows no bounds, when newly elected Labour MP for Sheffield Hallam, Jared O’Mara was accused of making offensive comments prior to becoming an MP the Tory party machine went into overdrive calling for him to be sacked.
He was rightfully suspended by the Labour leadership and had his whip withdrawn pending a full investigation into the allegations against him.

Yet when their own MP’s including members of the cabinet are implicated in scandal they protest that it’s unfair. On Monday’s BBC Newsnight Michael Fabricant the Lichfield MP was asked about the Westminster sexual assault allegations, he responded with this statement;

“It’s unfair to base things on rumour,” he said. “There has to be evidence against and there mustn’t be witch hunts either. I feel there is a growing witch hunt mentality currently going on. We have got to ensure that inappropriate behaviour is stamped out. It’s wrong. It’s unprofessional but, at the same time, we don’t want to see individuals who have been blameless being accused of things which, maybe, they hadn’t really done, or, maybe, at the time everyone was sloshed”.

I feel he doth protest too much, especially as he is alleged to have been inappropriate with a male journalist in a taxi.

So thats okay then as long as you are drunk you can grope or sexually assault anyone you fancy!

So we have a government that is not only incompetent, corrupt, dishonest but also indulges in debauched pleasure seeking promiscuous, licentious behaviour more commonly associated with the criminal fraternity. Oh but wait isn’t that the definition of a Tory in Irish Gaelic “Toraidhe” meaning outlaw or criminal.

So when an MP from an opposition party transgresses in any way they have to be suspended by their party and castigated in the right wing press, but if a Tory MP indulges in drunken debauchery and propositions young men or women it is deemed acceptable to just offer a meaningless apology and ‘move on’.
Well it’s not time to move on, it is time for the truth to be told and for the sorry sordid secrets of theses despicable, immoral, lecherous collection of sleazy unprincipled, disgusting people posing as respectable members of society to be exposed to the wider public.

If the UK is to return to a system of government where politicians are respected then there has to be system of reporting inappropriate and in some instances unwanted sexual advances such as an independent agency rather than victims suffering in silence and too afraid to report such incidents for fear of losing their jobs.