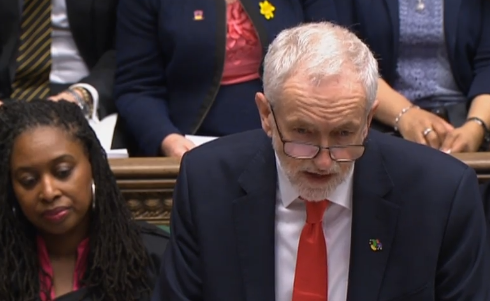 The Leader of the opposition challenged May on Brexit once again today but as has been increasingly prevalent for more than several weeks now it was lacking in revealing anything that would clarify what on earth is going on. Despite the promising opening statement from Mr. Corbyn, “This chaotic and incompetent Government has driven our country into crisis”.

Instead, we saw Theresa May flex her rather masterful abilities of denial and pure stubbornness to rebut all of Jeremy Corbyn’s questions but once again not one answer was given. The PM may assume she is clever by making life difficult for the opposition leader but perhaps she has forgotten that the people of the nation, who she very clearly stated she was on the side of, are also hoping to hear her answers so they may have an idea of what is happening in this rather crucial time.

The PM consistently said that we would be leaving the EU with or without a deal on the 29th March, only two days away and as her own MP, Andrew Bridgen stated, she instead “begged our EU masters for an extension”.He went on to say his constituents will never trust her again, it is possible the whole country will concur.

Jeremy’s first question simply asked what the PM’s plan B is?

As customary May responds with her deal is the only deal that can deliver Brexit.

Mr. Corbyn, rightly states that her deal has been defeated twice, once in the largest majority ever and went on to ask if she would agree that backing a customs union is the best way of getting support for her deal?

May responded by saying her deal would allow the benefits of a customs union whilst allowing for the negotiation of independent trade deals. She went on to claim that Jeremy Corbyn used to want that too.

Corbyn says many of May’s colleagues want a race to the bottom. Quoting what Richard Harrington said when he resigned as business minister saying that “the house is playing roulette with the lives of the people of this country”.

May responded saying she doesn’t support a race to the bottom and that the government has been working to enhance workers rights… She followed up by listing tax cuts, a national living wage and the highest number of people in work.

Corbyn ended by highlighting that everything in this country is being neglected and Brexit is in complete chaos. He said that May only continues to stoke divisions and is unable to govern, will she either listen or go.

May responded as she always does on the last question when she knows that the leader of the opposition cannot respond. She went on the attack stating that Labour would damage the economy and drop living standards and that the biggest threat to the country is sitting on the Labour front bench.

Under this government, the economy is being damaged and there has been a horrendous drop in living standards to many in the UK  #JustSaying