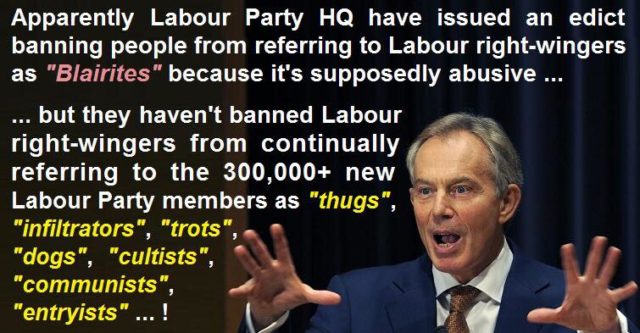 There are many tools (lies) constantly being used to undermine Corbyn’s leadership, decent socialists and the Labour Party.

1) The “cult of personality” with respect to Labour Party members who support the current leader of the Party, namely Jeremy Corbyn. These members have been described erroneously as “credulous acolytes” rather than recognised for their activism for social justice and common sense. Even some of the most ardent anti Corbyn detractors concede that the LP manifesto is a practical agenda for change which will impact positively on broken Britain. Is it any wonder that 100s of 1000s of Socialists within the Party view Corbyn AND his shadow cabinet as positive agents for change after years of heinous austerity which some “on the right” of the party appear to be coerced into preserving? (e.g PF1 etc) As detailed in a previous piece for Unity News, “People Power” is a more accurate description of the movement. https://www.facebook.com/UnityNewsUK/posts/1499091066839084

2) The conflation between antisemitism and criticism of an oppressive regime against the Palestinian people (which NEVER gets reported on MSM) – I encourage all members to join Jews for Labour.

3) Another ‘tool’ used by “hard done by” members of Progress is that their members were bullied at #Lab17 and they have initiated a petition with respect to this fake issue. These critics insist that folk are deluded if the message received from conference was ” unity and hope” Incidentally, the Israeli ambassador was entertained by such members at a hotel in Brighton during #Lab17
(Most people with a social conscience were busy protesting on behalf of the Palestinian people outside the hotel and have no record of discussion that took place within these parties)

4) Another ‘tool’ used is that Corbyn is a weak leader and weak on defence and the voting public won’t support him. The overwhelming evidence decry this opinionated scaremongering. Despite this senior member of a CLP exec declared “Corbyn won the vote for the country but lost us the vote locally” despite the LP increasing their share of the vote by 4000 in a Tory heartland

5) Another ‘tool’ used is that Momentum are a faction and all of who are proud members of this truly progressive group of fully paid up members of the Labour Party are sinister and Militant in disguise. Once again, the evidence against such a fallacy is overwhelming. Without Momentum’s input it is unlikely the Labour Party would have achieved so much in #GE2017. Membership of the Labour Party has increased to unprecedented numbers due to Corbyn and Momentum.

6) Another ‘tool’ used is that members of the LP are uncomradely if they even whisper to each other that former PM Blair might be a war criminal and should be tried as such. There is a very long report that took longer than expected to be published in which Blair is indicted as such http://www.iraqinquiry.org.uk/the-report/ It might be an opportune reminder that selling arms is a lucrative business and bellicose leaders are seen as strong rather than self serving individuals with blind ambition to succeed at any cost…

7) The witch hunt of members in 2016 by the compliance unit, using membership funds has been described as a fallacy by those members who brandish their http://labourvision.org.uk/…/petition-launched-to-end-bull…/as part of their armoury.

There are still excellent Socialists out in the wilderness on trumped up charges but it is apparently fake news / a perceived nonsense and those of us who were suspended are expected to offer the olive branch- which we indeed do using the motto “principles over personalities” and taking real strides towards unity!