Now that all the votes have been counted including the Tower Hamlets result, it is time to make a measured assessment on Thursdays poll as opposed to the premature judgements of the right wing dominated elements of the media and press.

The mainstream media and press along with the Tory spin doctors have done their utmost to minimise the achievements of the Labour Party, whilst at the same time attempting to influence the public that the Tory Party were allegedly victorious. 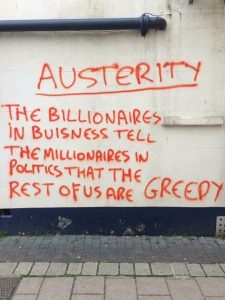 Firstly the Labour Party were starting from a high point after the results of 2014 and had everything to lose and very little to gain bearing in mind that after the 2014 election they already had more than half of all the elected Councillors.

Laura Kuennsberg the doyen of the establishment trumpeted that Labour had made “no inroads” into the Tory heartlands. Whilst it would have been a bonus to have taken full control of some of the Tory strongholds such as Wandsworth and Barnet she fails to acknowledge that in the majority, albeit not all of the councils that were contested, Labour have picked up seats where previously they had none or very few. 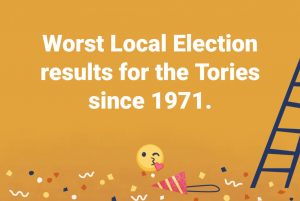 Overall the Labour Party gained more Councillors than any other party, 77 in total. The Liberal Democrat’s gained an extra 75 Councillors and that is hailed as a great achievement,but Labours increased number of Councillors is virtually ignored with a comment; “that they should have done better”.
The Lib-Dems started this local election campaign from a very low base so they always were going to potentially increase the number of Councillors that they started with. By contrast Labour who already set the bar high in 2014 were going to have to work extremely hard just to standstill and hold what they had, never mind actually gain more Councillors than any other party. At the final count once all the declarations had been made, Labour ended with a total of 2,350 elected Councillors compared to 1,332 Tory Councillors, over a thousand more, in fact 53.7% of all elected Councillors. This would equate to 346 MP’s in the House of Commons.
After all the votes had been counted the Labour Party ended up with more Councillors than the combined total of all the other parties including Independent Councillors. 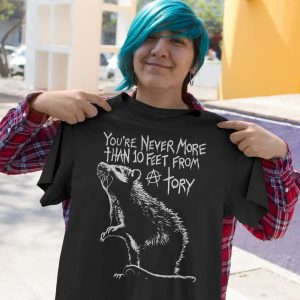 Now we turn to the Tory Party, they lost 33 Councillors and 2 Councils overall. They claimed victory in Peterborough and Pendle, but these were areas where they already were the largest party. In fact in Pendle the Tory Party showed it’s true RACIST colours and total lack of integrity by ‘immediately’ reinstating the newly elected Rosemary Carroll who had been suspended from their party for her ugly racist tweets. This was a flagrant manipulation by the Tories to take the Council by one seat.

Although the UKIP vote collapsed and that is to be applauded, the majority of the exiled UKIP voters migrated back to their natural home of the increasingly far right Tory Party. In the month prior to the local elections the Tories had to suspend 18 elected Councillors and prospective candidates for racist and abusive behaviour.

Although currently in Government the Tories were not in a strong position in local government and the bar for them was already at a low starting point, but even they managed to limbo under that and lose another two Councils overall compared to their already lamentable performance in 2014.

The Tory spin aided and abetted by the mainstream media of Labour “failing to make inroads” fails to acknowledge the poor performance of their own party in and around London. They lost two Councils to the Lib-Dems; Richmond upon Thames and Kingston upon Thames. The Lib-Dems also took South Cambridgeshire from the embattled far right party, currently masquerading as a governing administration. They also lost control of Trafford; their only Council in the Greater Manchester area, Labour are now the largest party there. 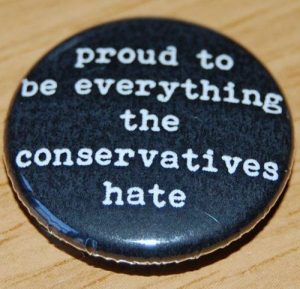 The hitherto RACIST party of UKIP have now all but virtually disintegrated losing 123 Councillors on the night and are now reduced to an insignificant rump of 3 bigots attracting an overall vote of around 6%. UKIP have served their distasteful purpose after pressurising the now departed David Cameron to hold an unnecessary referendum into continued membership of the EU, a result which has been divisive to say the least.

In the immediate aftermath of the referendum result the incidences of racist attacks and hate crime increased, as bigots who previously had kept their despicable attitudes to themselves began to crawl from under their stones as though legitimised by the result of the vote. Fortunately for the sake of decency they now appear to be an organisation in total disarray and hopefully in their final death throes. They are financially so bereft that they cannot even afford a leadership contest and are currently led by the virtually unknown Gerard Batten.

However the racist genie has been let of the bottle and has set up home in the Tory Party where it has been welcomed with open arms by the likes of Boris Johnson, Jacob Rees-Mogg, Zac Goldsmith, Norman Tebbitt, (Thatchers enforcer), Oliver Letwin, (all of the afore mentioned have previous history for racist comments and behaviour) and the increasingly overtly racist and discriminatory Theresa May. 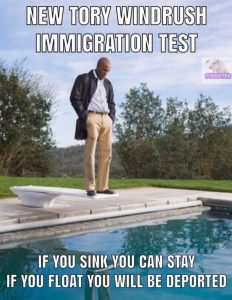 During her time as Home Secretary from 2010 – 2016, she implemented a programme of RACIST policies aimed at what has become known as the Windrush generation. She and she alone is entirely responsible for the forced programme of illegal deportations, detentions at Yarlswood and discrimination against UK citizens, who were invited to come to this country in the aftermath of WW2 and help rebuild this country by that other well known “Tory Racist; Enoch Powell”.
Now that generation who for decades contributed to this country through their hard work and taxes, have been deemed surplus to requirements and therefore expendable by Theresa May. As far as she is concerned, despite her whinging pathetic apology in the House of Commons they are nothing more than collateral damage in her quest to discriminate against anyone who doesn’t conform to her ideal of white privilege. 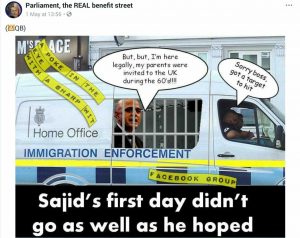 Even after the resignation of Amber Rudd, she still allowed her successor; Sajid Javid to continue with secret deportations earlier this week. On Wednesday her hypocrisy reached new levels when she enforced a 3 line whip on her MP’s to vote down a Labour bill intended to disclose the contents of papers during her time as Home Secretary and her involvement with the Windrush policies.
Not only did she enforce the 3 line whip, she also ensured that Tory MP’s did not pair with absent opposition MP’s who were campaigning in the local elections to ensure her party did not lose this crucial vote. In doing so she not only confirmed her RACIST credentials, but she sent a message loud and clear that she knows her corrupt behaviour is very soon to be exposed. She obviously has a very, very dark secret to hide and certainly had no desire for it to be exposed to the country and certainly not just before the local elections.

The local elections of 2018 have concluded with the Labour Party still in a position of dominance in the mainly Metropolitan boroughs, they now control 74 Councils out of 150, almost half of all the Councils contested, whilst the Tories continued to lose further ground, albeit limited due to a shoring up of their vote by the inherited racist voters from UKIP. Yet even with the transfer of allegiances from the Racists amongst the electorate they failed to increase their share of Councils and Councillors. 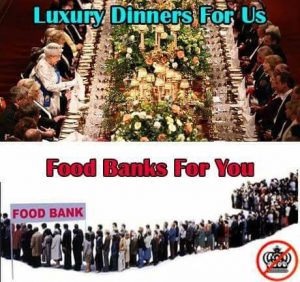 As their party lurches further to the right they continue to cling to power despite their attacks on the Homeless, the Public Services, the disadvantaged and vulnerable of society and the ethnic minorities.The country is currently dictated to by a draconian collection of politicians who are currently pursuing a programme of destruction of Socialist values with discriminatory anti-trade union legislation.In fact anyone who is not privileged or fortunate to be wealthy enough to be insulated from their despotic policies, are as far as the Tory hierarchy concerned, just cannon fodder in their continued assault on the majority of the population of the UK. Their continued programme of Austerity which only punishes the most vulnerable in society has so far failed to rejuvenate an ailing economy and employment figures which are are massaged by zero hour contracts.

The Tories are attempting to claim victory following Thursdays election and present themselves as the party of legitimate Government, whereas they are a party of authoritarians who believe they have some divine right to DICTATE to the rest of the country with a policy of divide and rule. They use a culture of blame to set one section of society against another, a particularly prevalent example of this being; the blaming of refugees and the immigrant population for the crisis in the NHS. A crisis that is both entirely of their party’s making, but deliberately implemented to ensure the managed failure of the NHS to justify the sale of the most profitable areas of the service. The strain on the public services and NHS are nothing to do with increased usage, it is everything to do with starvation of funds and draconian cuts all engineered and implemented by a regressive party who are solely intent on keeping power to benefit themselves and their privileged benefactors. 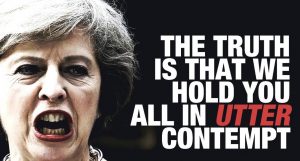 The lesson to draw from Thursdays result, is not that the Labour Party “failed to make inroads”, it is that despite all the abject inadequacies of the Tory Party, they still have control of the media, both televised and written, to such an extent that they can manipulate an apathetic electorate into voting for them despite their near criminal activities.
Activities such as; the criminal use of inflammable materials in Grenfell Tower, the institutional Racist attacks on the Windrush Generation, the continued supply of Arms to a despotic regime in Saudi Arabia to facilitate that country’s genocidal conflict on its neighbour Yemen, the so called “poisoning” of the Skripals and attempts to blame it on the Russian State with no credible evidence to back up the assertions. The bombing of Syria along with France and the USA to “destroy the Syrians capability to deliver chemical weapons” is yet another example of the LIES and international crime of the bombing a sovereign state with yet again, little or no irrefutable credible evidence to justify their actions. 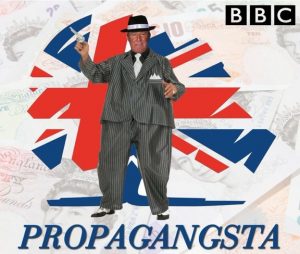 To counter this compliance by the Mainstream Media, it is necessary for all those who wish to see an end of this neoliberal dystopia to challenge at every opportunity the LIES that they impart to an electorate which has been anaesthetised by a diet of hysterical, jingoistic right wing press. To do this they need to redouble their efforts to inform the wider population of the crimes and LIES of this cruel, heartless and callous gang of Mays disciples who discriminate against all sections of society who are less fortunate than themselves with programme of spite and hate not seen seen since 1930’s Germany.   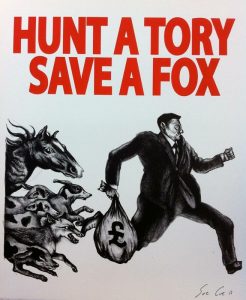 The Labour Party have had their best local election in result in London since 1971, almost half a century and their best result elsewhere since 1986, yet the Media and Tory spin Doctors continue to ignore this, preferring to try and dupe the public that they have actually defeated the Labour Party in this latest round of local elections. It is now time for those disaffected fear mongers in the Labour Party to acknowledge the achievements of Jeremy Corbyn who has transformed the fortunes of the party and galvanised the membership and turned them into a political force that the Tory Party in particular and the right in general are fearful of because they know that when the next General Election happens, be it 2022 or earlier then their political demise will begin. It is a time for unity and to recognise the common foe which is the Tory Party and those who sit on the right of the political spectrum. 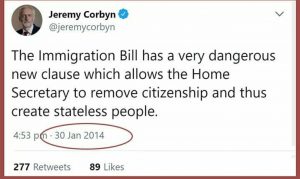