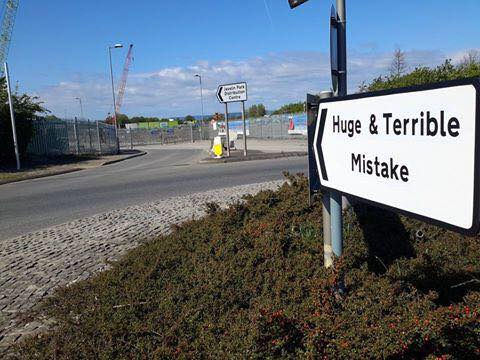 The incinerator issue exemplifies the consummate arrogance of this current government and those members of the County Council who have complacently assumed that their profiteering plan would be pushed through and upheld simply because they had funding from Balfour Beatty, the company who gives huge financial donations to the Conservative party on an annual basis. If this is not corruption and a clear conflict of interest, what is? If this was happening in South Africa or Russia, the British media would give it liberal coverage to expose the endemic immorality that the government in question would be seen to being party to. It reveals quite plainly what a misnomer it is to call this country a democracy. It is not a democracy, it is a police state – meaning no disrespect to the police themselves here, who are caught in the crux of this moral dilemma like the proverbial fly caught in the predatory, self-seeking spider’s web. 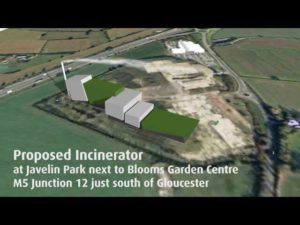 In the case of fracking in Lancashire, and in the case of this incinerator issue here in Gloucestershire, the democratic rights of public will have been trampled on, dismissed and patently ignored, to support polluting, destructive, invasive industries for the sake of profit, which will benefit a tiny few, at the expense of the well-being of us all. This is an outrage against common sense. It blatantly demonstrates a depth of injustice at the highest levels of our society; a profound disconnection from the Earth that we all depend on; and a breath-taking lack of care for the children and young people of this country who will be left with the burden of dealing with the extensive damage to our ecosystems that this generation – at the moment headed by Theresa May’s government and companies like Caudrilla and Balfour – will leave behind in their harmful wake.

It is unacceptable. This government and companies like Cuadrilla and Balfour have crossed too many lines. It cannot be allowed to continue. They are like juggernauts out of control; if the steering wheel is not gently but very firmly taken from their misguided hands it will eventuate in disastrous consequences for us all. I, for one, have had enough of shabby, wrongful practices which reveal such a profound disconnection and such a – to me – mystifying lack of care for the Earth, for our ecology, for our wildlife. This effects the human population on every level: physically, emotionally, psychologically, culturally and spiritually. Just how much we are effected is a subject for a further discourse which there isn’t the time and space for here. Suffice it to say, in the case of the incinerator – putting financial mismanagement aside of which there is ample evidence – it will pour dangerous dioxins into the atmosphere that our children and all of us will be unable to escape. There are much better choices to make. They have not been made.

The companies supporting the incinerator, alongside the County Council and this government, have a duty of care here which they are not honouring – just as they have disrespected and ignored the voice of the communities they are meant to be in service to. This has to stop. That’s why taking part in peaceful direct action to make our voices heard, our rights respected, are essential at this time in our country’s history. There comes a time when the putting of our bodies in the way of these destructive industries is necessary; if the Tolpuddle Matyrs or the suffragettes had not done this, we would not enjoy the rights that we currently enjoy. We must remember that those rights have not manifested out of mid-air; they have been born from a collective determination to see Justice served; they have come from the willingness of others, our ancestors, to struggle and suffer on our behalf. This is a legacy we should not forget. 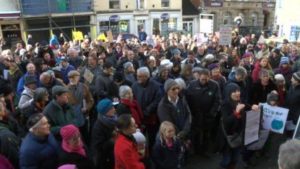 We want a future that is clean and green, innovative, creative, harmonious. We want a future where the well-being of people and planet are put well before the pursuit of profit. We want a future which has finally come to recognise that cooperation, altruism, mutual respect and inclusivity become the foundation stones upon which are societies and communities are based. Communities where the value of every individual’s potential is recognised and nurtured to flower. This will involve taking greater responsibility for all our actions on a day to day basis and recognising that whatever role we perform is one that may benefit not only ourselves but the whole; the collective which we are indisputably a part of. And isn’t this the way that Nature’s elegant, beautiful and efficient mechanisms and systems work? When Nature becomes properly honoured, then we will begin to mirror that elegant, mysterious artistry in our own creations – whether this is transport, buildings, communications, town planning, Science or the Arts. When this happens we will have truly come of age and the era of global peace and prosperity, which glimmers as a tangible possibility in the mind’s eye, will be presenced on Earth. But as the Chinese say, ‘the journey of a thousand miles begins with one step’. We need to take that step now by making the correct decisions – decisions which focus on fostering health and well-being. To do any less than this is to deny the young people of today and the children of tomorrow that beautiful world, we all know somewhere in our hearts IS possible.