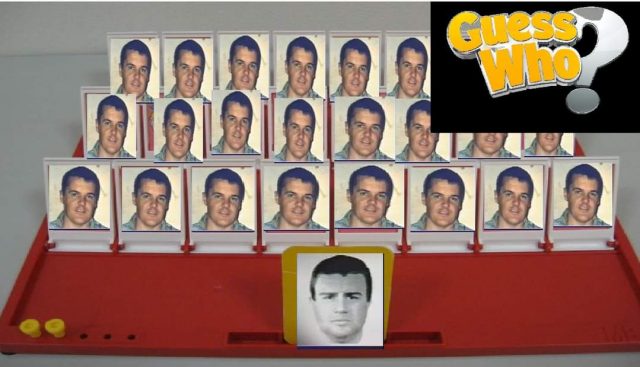 That’s what happened to David ( Dai ) George Morris. In 2002 and again in 2006, Morris was convicted and sentenced to four life sentences following four horrific murders that wiped out three generations of one family all in the same night.
Mandy Power, 34, her daughters Katie, 10, and Emily, 8, and her elderly disabled mother Doris Dawson, 80, were all brutally beaten to death in the early hours of Sunday 27th June 1999, in the small village of Clydach, South Wales, in what is not only one of the worst multiple murders in Welsh history, but also one of the gravest miscarriages of justice in the UK. But what happened on the night in question has left many people in no doubt that Morris is indeed innocent of these heinous crimes.
First, the killer entered the home of the victims, went upstairs and bludgeoned to death 80-year-old bed ridden Doris with a heavy fibreglass pole, repeatedly beating her in the face with such force and precision leaving her completely unrecognisable.
There was no sign of forced entry, leaving many to believe the killer may have had a key. The perpetrator then laid in wait for Mandy to return home with her two daughters.
Shortly after their return, the perpetrator pounced and bludgeoned Mandy and her two daughters to death, killing them with the same fibreglass pole as Doris. A silver watch was then placed on Mandy’s wrist and a vibrator inserted post-mortem.
The perpetrator then tried on numerous occasions to set fire to the property in various locations, trying to incinerate any forensic traces left behind, this however proved unsuccessful.
The murders made national headlines and possible motives were coming to light.
It quickly emerged that Mandy was bisexual and had been in a relationship with a female named Alison Lewis who was a retired South Wales police officer, Alison however, was married to a fellow South Wales police officer, Stephen Lewis, who had been heard threatening to kill Mandy if she did not stay away from his wife.
Alison Lewis’s DNA was found on the inner thigh of Mandy Powell, and on the sex toy.

Stuart Lewis was picked out in an ID parade by a witness who saw him on the road of the murders around the time they took place. Stuart Lewis who was an inspector in South Wales police, was working a night shift on the evening of the murders, he reportedly went absent for three hours along with his police vehicle to which he has never given an account of his location.

Twelve months on, all three of the Lewis’s were arrested for the murders but soon released without charge, despite overwhelming evidence implicating them. Instead, three years after the murders the name David George Morris was given to police and he was subsequently arrested and charged with all four murders.

The evidence against David Morris is circumstantial at best, a gold necklace with a broken clasp was found at the home of Mandy Power which David at first denied belonging to him, but later admitted to it being his, he stated he was having a sexual relationship with Mandy behind his girlfriend’s back and didn’t want that to be made public. He further stated on the morning of Friday 25th June, 2 days before the murders, he met Mandy Power in the village, went back to her home where he took off his heavy gold necklace (which already had a broken clasp) and engaged in sexual relations with Mandy. This alibi was supported by Mandy’s next door neighbour’s teenage daughter and friend of Mandy’s, who provided a statement to police stating she had entered Mandy’s home on the Friday Morning and saw Mandy and Morris engaged in sexual relations and promptly left, she later returned when Morris had left and had a conversation with Mandy about the necklace Morris had left behind. An independent witness corroborated Morris’s story but was not given the chance to state what she witnessed at court. 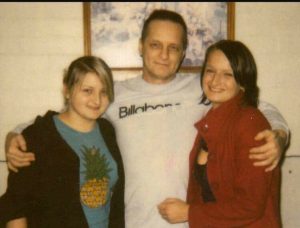 Morris was convicted on the circumstantial evidence of the gold necklace being found at the crime scene and the lack of an alibi for the night of the murders.

There were no fingerprints and no DNA evidence of David Morris found at the scene. South Wales police stated the perpetrator was forensically aware and had wiped away all traces of DNA and fingerprints from the scene, yet their theory was that Morris was heavily intoxicated and high on amphetamines and went on a drunken rage beating the family to death after his advances to Mandy were rejected.
A forensic scientist however, said it would be impossible for a criminal to wipe away all traces of DNA, yet this is what the police alleged David Morris did whilst high on amphetamines and heavily intoxicated.

South Wales Police also said other than the DNA of Alison Lewis, there was no other DNA found at the murder scene, however, this was a lie.
In 2014, it emerged that there was in fact a substantial amount of DNA found at the crime scene, and in a number of extremely important locations including the murder weapon, the two spent matches used to start the fires, the silver watch placed on the wrist of Mandy post-mortem and on the clothing Mandy was believed to be wearing at the time of the brutal murders. This evidence was omitted, though the DNA revealed trace cells of the male Y chromosome, yet not a single piece of the DNA was found to match that of David Morris. It has never been disclosed if the DNA matched or eliminated either of the two Lewis twins.
This crucial evidence was never made available to either jury.
Based on the forensic evidence alone, it would seem David Morris could not have committed the murders.

Witnesses have come forward to say they had been ‘leaned on by the police’ to change their evidence; other witnesses were told what they should say in their statements and in court, and at least one witness was prevented from giving vital evidence which may well have changed the outcome of the trial(s). This was the witness who supported David’s explanation for the necklace being left at Mandy’s home.
A former police chief stated that a bloody handprint was a better match with former girlfriend Alison Lewis than with defendant David Morris.
Ex-Detective Chief Inspector Peter Swann, an authority on fingerprinting, also stated he believed the handprint did not belong to David Morris.
A leading martial arts expert Mick Flynn stated, all the victims had been battered to death using a pole in the manner of which a trained martial arts expert would use it. Alison Lewis was trained in martial arts and one of her areas of expertise is fighting with the use of a bo. ( A Japanese pole weapon ) 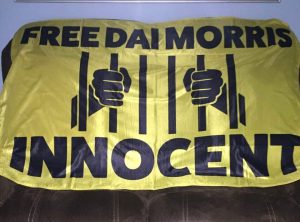 Morris unsuccessfully appealed his convictions on three occasions in 2007, 2014 and 2017. The CCRC (Criminal case review Committee) have consistently refused to have this DNA tested, even though it could prove David Morris is innocent and identify the real perpetrators of these heinous crimes, they also repeatedly deny the case to go back to the court of appeals despite overwhelming evidence pointing to Morris’s innocence

Twenty years later, Morris continues to protest his innocence and has a powerful legal team, consisting of Francis FitzGibbon Q.C, Maslen Merchant of Hadgkiss Hughes & Beale solicitors, Brian Thornton of the innocence project and more recently, strong political support from Labour MP John McDonnell, with his vast experience in supporting miscarriages of justice and his political allies, this is a much needed step to put pressure on the CCRC to review the case, along with the evidence that has never been put before any judge or jury and give Morris a fair trial.

A documentary that has uncovered new evidence will be aired on Thursday 22nd October, on BBC Wales at 9pm, entitled “The Clydach Murders: Beyond Reasonable Doubt”, for those that don’t have BBC Wales, it will also be available on IPlayer. 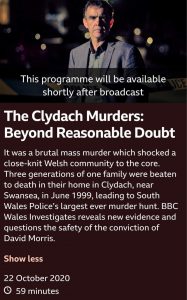