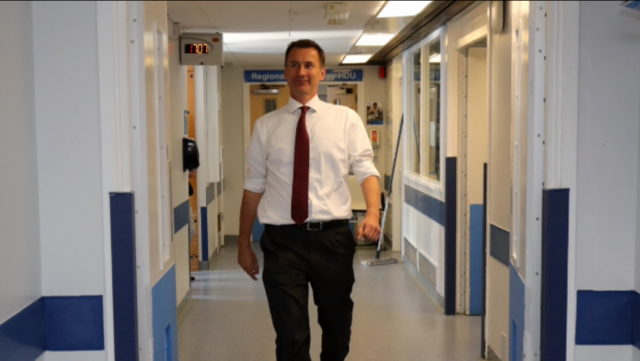 Jeremy Hunt visited Stroud yesterday in an attempt at an undercover meeting of key participants in his plans to sell our NHS but locals found out about the Friday visit late Thursday afternoon  and members of the public were there to greet him . 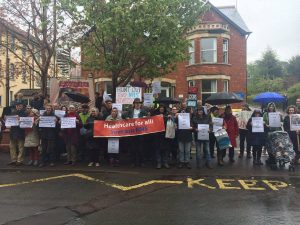 As we walked into Stroud hospital it was as quiet as a Sunday afternoon, 3 people in the minor injuries unit and four others in the entire hospital attending clinics which are usually full to bursting if you visit on any other day of the year. the usually full carpark coned off and deserted. 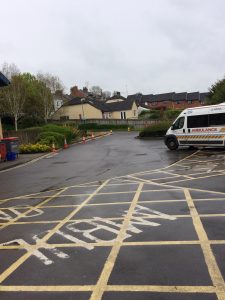 In reception however there was bustling activity, a number of suited and booted ‘staffers’ for Hunt were busy trying to assess the ‘crisis’ of protestors gathering outside the hospital . Police were called and the Matron of the hospital was dispatched outside to ‘talk’ to demonstrators about keeping the entrance to the hospital clear for access and egress. The staffers followed her, on their phones to other staffers with Hunt presumably relaying the ‘threat’ level of a few dozen locals angry about the privatisation of our NHS. Though to be fair the number of protestors outside far outweighed Hunts supporters inside . 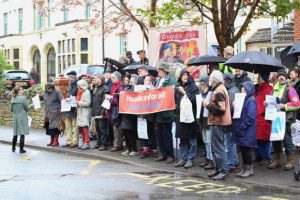 A desultory parade of consultants, docs and nurse passed through the ‘checkpoint’ in reception to attend the meeting. Approx 20 people, including a phalanx of young blonde women in full nurse attire with capes who no one on the hospital  staff knew.

We hadn’t expected any answers to our questions and true to form we didn’t really get any. Hunt also refused to talk to the public outside and his car was pelted with flour as he left to see if he had any more luck in Bath.

Stroud Against the Cuts, Caroline Molloy explains why protesters turned up to protest Jeremy Hunt's visit to Stroud today

Stroud Against the Cuts, @Caroline Molloy, explains why nearly 100 campaigners turned up to protest Jeremy Hunt's visit to Stroud Hospital today."[Hospitals] are ours and people are here because they know that they need to protect them." 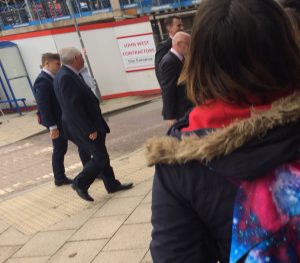 When Hunt reached Bath he was booed 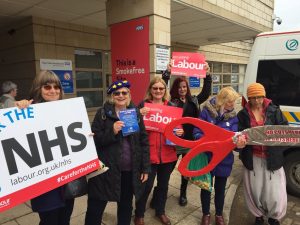 So don’t fall for Hunt’s lies . Tory policy is to privatise our NHS