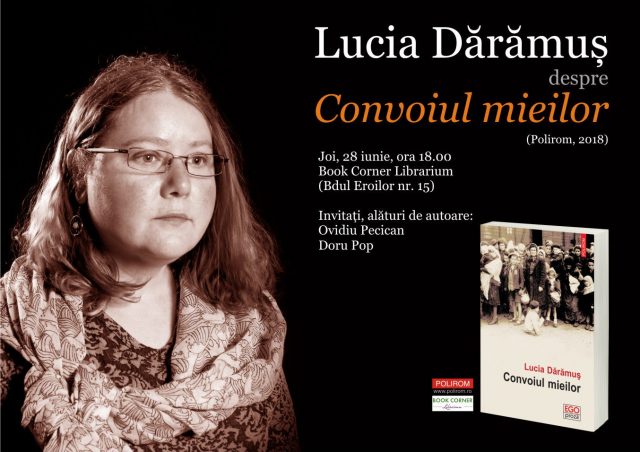 I Grew Up In A Communist Country
by Lucia Daramus

Cold, cold, cold… It was winter, and the winter in Romania is very cold, actually freezing. I was staying in a room at Ceausescu’s hospitals. After 30 years, I still feel the hunger, the cold, the darkness, the lack of love, the fear… Yes, fear.

The hospital room has eight iron beds with very old mattresses that smell of urine and on the windows, iron bars. The floor is bare cement and we are hungry, but the food is rationed, in very small portions. A tea with a slice of bread in the morning, and some diluted soup later. The slice is tiny and very dry. A girl near me is crying, she was beaten by the carer.

We are not allowed to get out of the beds and if we are disobedient, we are beaten or tied up to the bed with a rope. Yes, you can see the traces on our hands and ankles. Sometimes, because we are tied we are unable to go to the toilet, and we urinate on the bed.

I am not allowed to go to school.

It is freezing and I am hungry so, one night, I slip out from the unit room and sneak into the hospital kitchen. I steal a piece of bread and I hide it in the pocket of my pyjamas. It is a slice of mouldy bread. The older girls in the room found my piece of bread and they confiscated it, they were hungry too. The carer and nurses found out about my night getaway, and I was punished. Tied to my bed without food and water.

I remember my hair infested with lice and the scissors viciously cutting my blond, curly hair. The skin of my scalp hurting because of the brutality…

The cruelty lasted for years but I had a secret survival method, my mind. I created a world, a perfect world, a perfect land, and I called it LIMELFIA. I wrote about it in my books years after.

Due to the cruel regime at Ceausescu’s hospitals, where I grew up, I didn’t develop a relationship with my parents.

With a child’s imagination as a method to survive without parents, I imagine that my biological parents are the saviours of the world, they are very busy… However, that wasn’t it. It was quite the opposite.

After years of this misery, I was allowed back into society. But what kind of society?

I am in school, my mind is like a sponge but the system is so incomprehensible, ununderstandable… In school we have no water, we have no light, we have no heat in the radiator, no sanitation…

On the wall, in front of our class, there is a picture of Ceausescu. We are taught that he is our father, the father of our land. We must pay respect, to sing for him a song each morning, to salute his picture standing to attention. If not, we are punished as children and also our families will suffer because of our disobedience.

People are living in very narrow flats, in grey blocks, everywhere around are only grey blocks of flats. The children are playing games in front of these blocks on the street. We have only two hours of TV in the evening, when Ceausescu is talking or when somebody from the Communist party is talking about our land as a great country!

We know nothing about Western countries, only that people are dying on the street. We are not allowed to have contact with any country outside the Soviet Block. Our flats are so fragile and insecure, through the wall we hear what is happening in our neighbour ‘s flats. Some of them are snitches, they inform about the habits of their neighbours to the Communist police (the security).

I remember a story about my classmate, her father was a prominent doctor. He was training himself with continuous professional development, keeping in secret contact with doctors from Western countries. You were allowed to go to these countries to perform or to train if you signed a form, provided by the Communist party. It was compulsory that you come back. Whilst there you had to collect information about Romanian fellows who had fled from Romania and also to concoct fake stories to denigrate them. This habit is still practicing today by the older generation to discredit people from the new generation who have a more open mind. But the father of my classmate refused this, refused to be a traitor to his fellows who chose liberty.
So, one night, when everybody was sleeping, the doctor called one of his colleagues in France to ask about a medical book but his phone was bugged. The Communist police intercepted the conversation and ten minutes later, the security of Ceausescu was at his door. The security arrested the doctor. and he was tortured until he admitted that he was a traitor. His wife was forced to divorce him but she refused, because of her disobedience she was declared a lesbian, a very strong crime in Romania and she was imprisoned. My classmate was sent to the Ceausescu orphanage. Finally, the doctor died in a Communist security prison,  just for a  western book, a symbol of ‘our enemy’.

Facing up to the past, Romania is trying to recover, to be again what it was before 1945. A beautiful, intelligent country with a capital – Bucharest – called Little Paris! But the old and the new is fighting. I am still young and my generation has an open mind to open borders and chooses democracy.

The older generation, are still stuck in the past, with an old mentality, an obedient mentality, and still chooses old structures of a Communist heritage. We no longer have the sinister orphanages, but we have parental settlements where the children are tortured, forced to beg, beaten, sexually assaulted or sold for the prostitution. Now, Romania is the main country in Europe which provides girls, young girls for prostitution to the Western countries, including the UK. These girls become prostitutes against their will.

A Romanian senator, Vlad Alexandrescu, was writing a book – Herod ‘s children (Copiii lui Irod). He is unable to do anything for these children because Romania is led by the most corrupt party here, the Social Democrat Party (PSD) which is a Communist inheritance. It is not like Social Democrat parties from Europe. This year Social Democrats from Europe refused to have contact and they separated their organisations from Romania.

Psychiatry units and hospitals in Romania are a disaster. The mentally ill are beaten, raped, starved, despised and forced by doctors to work in their home.

Romania is still experiencing horrors. Innocent girls, 15, 16, 17 year-olds, were stolen off the street, in the middle of the day, imprisoned, beaten, raped, and finally killed, their bodies dissolved in sulphuric acid. College students, very clever girls, were kidnapped from the street, drugged and raped in an American Military Base – Deveselu – in Romania. After their captivity, some of them were cut into pieces and dissolved in acid because of their disobedience.

Romania has wonderful people too, the new generation is a generation of liberty, intelligence and beauty who are fighting against the old generation.

My mind is like a sponge I understand everything… My refuge is in books… I read all of the most important writers from antiquity to present, I studied classics in university, learning everything about Latin and Ancient Greek languages, history, art, linguistics, ancient philosophy, archaeology, etc. Now I have become a classicist, a writer, a freelance journalist and cultural editor. My invented worlds in the past help me a lot because in unfavourable situations, my mind was a refuge.

Here you will find some more information about me, written by one of the most important Publishing Houses in Romania.
http://romanianwriters.com/author.php?id=121

​So, Romania is a wonderful, beautiful and wild country led by old and corrupted leaders, but with a wonderful new generation and hopefully a more positive future.