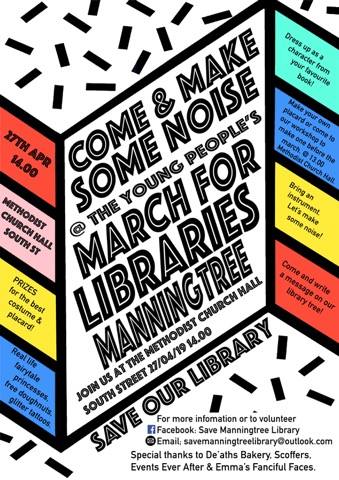 The smallest town in England is showing a big heart on Saturday 27th April to save its library. Local children will be dressing up as characters from their favourite books and making a lot of noise in a bid to save their much-loved library from closure.

Manningtree Library is just one of the twenty-five libraries facing closure due to Essex County Council’s plans to save £2 Million pound.

There will also be a placard workshop from 1 pm in the Methodist Church Hall for children that need help making what could be their first ever protest placards.

Holly felt enough was enough when she heard about the proposed Library closures she said “After having my second son, I was shocked at how much services for new mums have been stripped back since I had my first nearly five years ago. Rhyme time is literally the last thing standing it seems and now they want to get their hands on that and rip it away. My partner and I are both NHS nurses and have witnessed the decimation of public services and the library basically felt like the last straw for me.

After closures of local SureStart centres and the decimation of baby and toddler groups, the local library event Rhyme Time is one of the last groups in the local area available for local Mums to engage with their local community and meet other Mums with their young children. Holly advised “A lot of my job is focused on perinatal care and the emotional well being of mums depends on engagement with others mums, their communities and other adults.”

Holly is concerned that other local vulnerable people and children of all ages are about to lose a vital community service and felt the public consultation did not go far enough to gain an understanding of the entire community it affects. “The public consultation document designed by ECC was aimed at adults. There was not a child-friendly version for them to complete to give their views about how they feel about the closures. I see this protest as an opportunity for them to have their voice. Considering 29% of all Manningtree Library user are aged 0-9, they deserve an opportunity to express how they feel.”

The event comes after a petition with 57,000 signatures was ignored by the Conservative-led council who are continuing to steamroll plans to close twenty-five libraries and reform the services offered by the forty-nine remaining libraries.