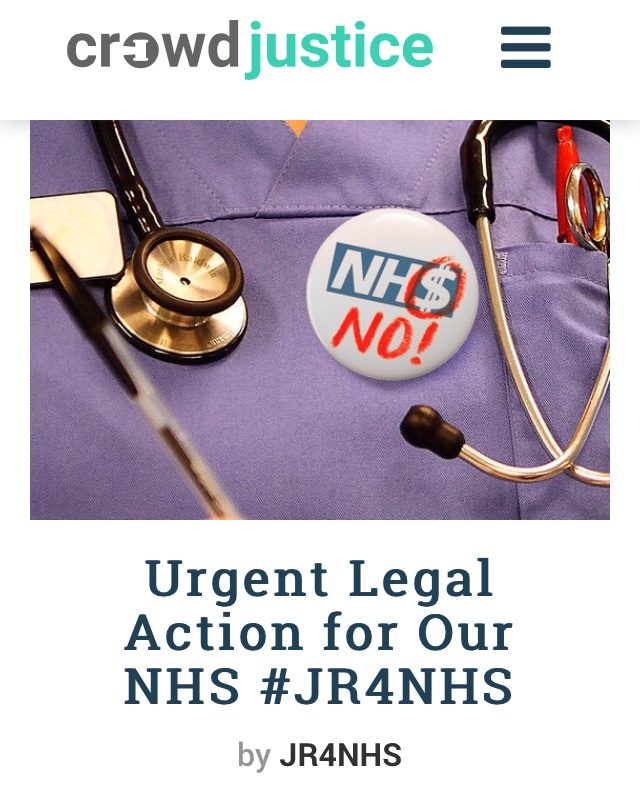 Please help! We are seeking a judicial review to stop the Secretary of State for Health Jeremy Hunt and NHS England from introducing new commercial, non-NHS bodies to run health and social services without proper public consultation and without full Parliamentary scrutiny.

These non-NHS bodies are known as Accountable Care Organisations (ACOs). They will be governed by company and contract law and can be given “full responsibility” for NHS and adult social services.

ACOs were conceived in the US about 12 years ago. They are now being imported into England although they are not recognised in any Act of Parliament.

They will be able to decide on the boundary of what care is free and what has to be paid for. They will be paid more if they save money.

They can include private companies (e.g.Virgin in Frimley, Circle in Nottinghamshire), including private insurance and property companies, which will make money from charging.

They can also include GP practices, in which case people on their lists will automatically transfer to the ACO in order to be entitled to services – new patients will also have to register with the ACO. They will be allowed to sub-contract all “their” services.

**Against the Public Interest**
ACOs will fundamentally change the NHS and involve a radical reorganisation of health and social services. They will have control over the allocation of NHS and taxpayers’ money. Their accountability for spending it and their obligations to the public will be under commercial contracts, not statutes. This will not be in the public interest.

It is also against the public interest that they are being introduced by stealth, without proper public consultation and without full Parliamentary scrutiny.

What is the Secretary of State doing exactly?
The Secretary of State for Health is carrying out a consultation on technical changes to regulations in order to facilitate the ACOs. But he’s doing this before providing any serious information about ACOs themselves and without consulting the public or Parliament about what his plans entail.

The technical changes include suspending GP contracts so that they – and their patients – can transfer to the ACO.

Following the end of the consultation on 5th November 2017 the Secretary of State will be able to lay the regulations before Parliament and they will automatically become law unless the House of Commons or the House of Lords votes against them within 40 days.

***This sounds like PFI all over again… ***
From the early 1990’s Conservative and Labour administrations introduced Private Finance Initiatives (PFIs), bringing private sector into ACO-type public/private partnerships with the NHS. Professor Allyson Pollock led the exposure that PFIs were a far more expensive way to borrow than the government doing so itself.

PFIs continue to drive hospital and service closures and major service reductions throughout England due to high cost of servicing annual charges. The NHS pays hundreds of millions of pounds a year to tax-dodging off-shore finance companies instead of funding much needed services. It is vital this type of mistake is not repeated.

***What are we doing?***
We have responded to the limited and inadequate consultation and told the Secretary of State that he must withdraw his support, through the regulations, for the ACO contract until a proper public consultation has been carried out.

Our solicitors have also sent him a pre-action protocol letter saying that unless he reverses his decision to support the introduction and operation of the ACO contract we will seek a judicial review.

Our solicitors have also copied in NHS England, as an ‘interested party’. This is because NHS England told them in October that NHS England will conduct a consultation sometime in 2018 on the proposed legal contract for ACOs.

The Secretary of State is therefore pre-empting the lawfulness of that future consultation because it must be carried out when any NHS England proposals are at a formative stage.